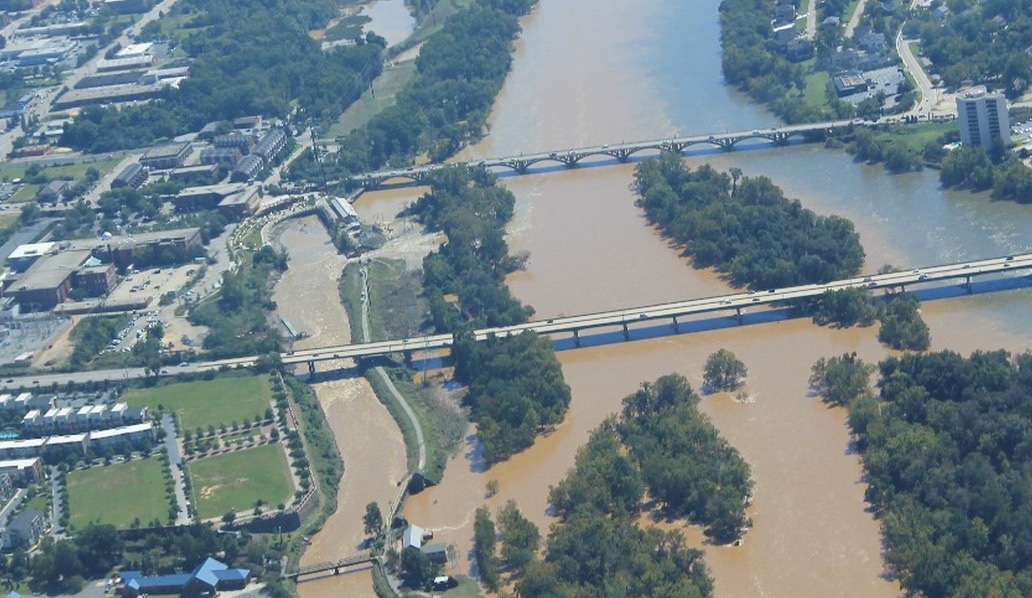 We’ve written extensively already on the total lack of prioritization displayed by City of Columbia, S.C. leaders in recent years – choosing to fund all manner of wasteful projects while letting vital infrastructure rot.

So … how did those leaders respond when their chickens came home to roost this week amid the rising waters of “Floodmaggedon?”

Late Sunday evening – as the storm was still raging – the Columbia Canal was breached.  The canal provides water for nearly 200,000 people located in the downtown Columbia and Lower Richland regions of the South Carolina Midlands.  Its structural failure severely compromised the city’s water supply – with more than 130,000 customers losing service completely in the aftermath of the breach.

The breach reportedly wasn’t discovered by the city for several hours.  Several additional hours elapsed before an assessment of the situation was conducted.

And when city leaders finally began their “efforts” to close the gaping hole – that’s when the real problems started.

Remember the old expression?  What former U.S. president Ronald Reagan once called the “nine most terrifying words” in the English language?

“I’m from the government and I’m here to help.”

According to a city source familiar with the city’s “emergency response,” leaders were paralyzed by the developing situation – unsure of what to do.  Meanwhile internal power struggles raged regarding who was supposed to be in charge of the project.

“They were there all day Monday setting up a staging area,” our source said.  “(The project) was supposed to start first thing Monday morning.”

The National Guard also had Boeing CH-47 Chinook helicopters stationed out of McEntire Air National Guard Station on standby – ready to assist in the operation.

As we reported earlier this week, National Guard resources finally began to descend on the area midday Tuesday.

By then, though, an entire day had been wasted.  And even after the cavalry arrived, the city leaders couldn’t effectively leverage all the resources brought to bear due to “bureaucratic resistance” and continued discombobulation.  Not only that, the first temporary dam the city erected (belatedly) in an effort to mitigate the impact of the breach actually made matters worse.

The result?  A water crisis.

Eventually, city leaders turned to private sector experts to get a handle on the situation – while employing stopgap measures in an effort to maintain water service.

“The struggle is as people build back, the demand (for water) is going to come back up,” our source said. “And when that happens, what’s the plan?”

City officials have repeatedly said there is no danger to the water system being shut down.

Benjamin added “there are no plans to shut off the water system – zero plans.”

Okay … but what about the amount of water the system is capable of processing?  What level of reduced capacity are city officials envisioning moving forward?  For how long is the system going to be operating below full output? And how does this reduced capacity impact a city struggling to get back on its feet?

How does it impact hospitals, for example?

Also consider this: Virtually every government agency in the Midlands was shut down all week to reduce water demand.  What happens when those users come back online?

And what happens when the city lifts its “boil water advisory” on more than 400,000 of its citizens?

Oh … and the most important question: What impact did the city’s boneheaded response have on these extended water shortages?