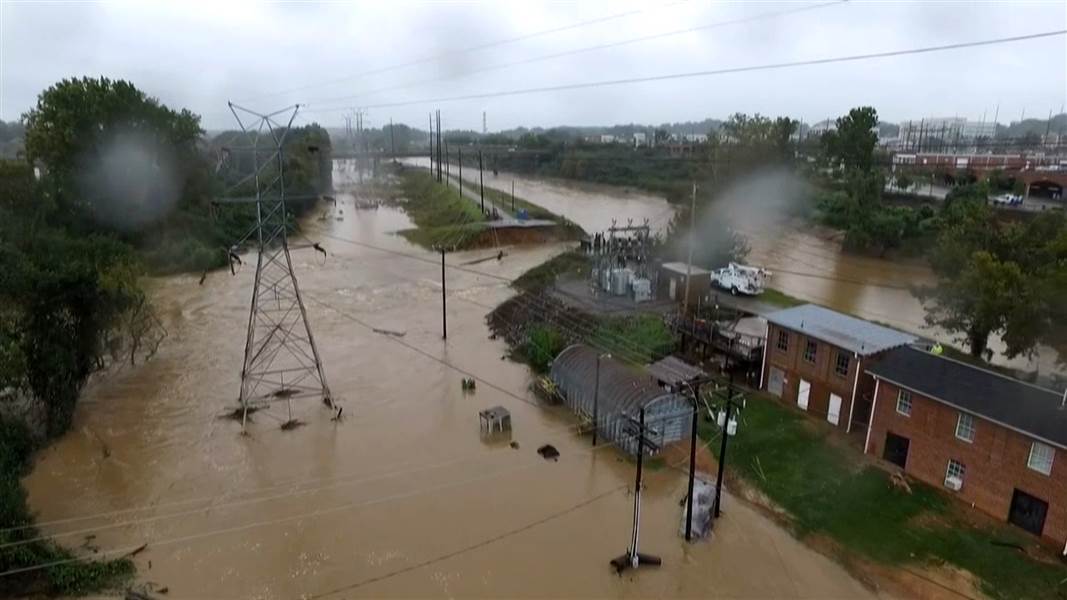 National Guard troops have set up a staging area near a major breach in the Columbia Canal – and have ordered nearby homeowners and business owners to evacuate the area.

“They have placed cones around their staging area,” one witness told us.

Meanwhile business owners in the area have been told to move their vehicles in order to provide room for incoming emergency response assets.

“They told my staff to move cars at my office,” one West Columbia, S.C. businessman told FITS.  “Said helicopters were coming and (a) large number of Guardsmen.”

Indeed one huge Boeing CH-47 “Chinook” helicopter arrived on the scene Tuesday afternoon to assist in the efforts.

And a look/ listen …

Well, a major breach took place late Sunday at the canal – which is located in downtown Columbia, S.C.   This breach is one of the more worrisome developments associated with “Floodmaggedon” – one of the worst natural disasters in South Carolina history.

It’s worrisome because the breach is located right next to the City of Columbia’s primary wastewater treatment facility.

“The SC National Guard … brought massive sandbags to the (site) in an effort to stop the flooding,” local television station WLTX TV 19 (CBS – Columbia, S.C.) reported at the time.  “Officials say they are trying to repair multiple water breaks throughout the area.”

Now the Guard will attempt to lift heavy earthmoving equipment into the area in an attempt to plug the hole.

We’ll let you know if they are successful …

Built in 1824 using a natural ravine running alongside the Broad and Congaree Rivers, the canal has been used for transportation and hydroelectric power generation.  It was also briefly used by Confederate soldiers as a power source for the manufacture of gunpowder used in the Civil War.

South Carolina-LSU Game Up In The Air

Did they fly in on Black Helicopters….and was this sleuthful “witness” half-drunk and prancing around in a Speedo that matched your…???…LMAO…

poGo done gone an’ kilt his twisted idol daid, so he could become him on FITSNews. Probably wearing the skin of GT’s face for a mask, 24/7.

“Probably wearing the skin of GT’s face ass for a mask….”

Nice Boz.Read below and damn if I ain’t some NEW material from the heavens. :)

“And speaking of driveways, what about the guy who hit those bikers and killed one of them after leaving David Brittain’s drunken party?He had a prior on something like that, right, at least a prior charge. You guys assisted in the way Hembree and others on the corrupt legal side of the “Myrtle Beach Mafia” let that guy slide for that to this very day.

And hey, Mike Wooten gonna get more high-profile again? Now THERE’S somebody you’ve kept in the background pretty much for a while, huh, sort of like Kelly, Greene, Dyer, et al. Some people I know remember how ol’ Mike made a big show of going around asking for donations for the infamous political pay-offs at various businesses in MB, in order to make it look like all the money was not coming from Brittain, then never really followed up coz it was just a show. But he’s been just quiet as a mouse since then. Clever of you? Not really. There are those who saw through that crap from day one.”

My guess is the Black Helicopters will SOON be flying over Boz’s tent? Oh my! He defamed the deceased Brittan, Wooten,Hembree and Kelley in this libelous ‘prance’ on the truth. LMAO!

The big question is Brittain’s cause of death. Very little ever said.

If that’s it, it’s a great picture. But thinking need more like bulldozers and giant piles of dirt to close that gap.

Very cool video of the Helicopter.

There will be hell to pay if they don’t save the Confederate Relic Room at State Museum. The Confederate flag is in danger if the canal fails.

Wouldn’t that be ironic. Washed away in a flood of sewage. Oh the Irony. Oh the Tang-irony.

“Why worrisome? Because the breach is right next to the City of Columbia’s primary wastewater treatment facility.”

My evil plan is coming to fruition. Soon we’ll all be famously shit upon.

There is a lot of activity down there now. Jarvis Klapman is closed (in bound lanes), there is one lane open in front of the State Museum and a helicopter is hovering about.

Hard to believe it had been raining for nearly a week before today. Sun it out, very few puddles around. But still the rivers and creeks are overflowing!

Gravity is a very powerful force, you should Google it.

It’s near the water plant, not the sewer plant which is down by I-77/Bluff Rd area. This water plant can produce up to 65,000,000 gallons of drinking water a day.

Will Benjamin and Haley both end up at Butner, or some other facility?