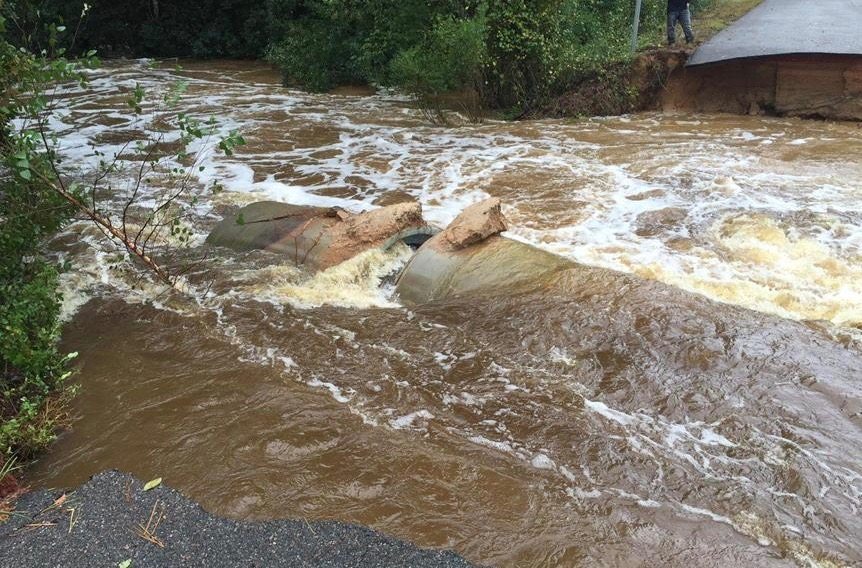 How much is it going to cost to repair the damage done to South Carolina’s roads and bridges by this week’s “Floodmaggedon?”

According to lawmakers familiar with the damage estimates, a preliminary total of $1.5 billion is being discussed.

“I’m hearing that as a minimum,” one legislative leader told us.

“Is that all?” another lawmaker asked, incredulously.

“I would figure more,” the lawmaker added. “They are bad.  They were bad before, but now it is not an option to rebuild them.”

Now … when $1.5 billion is thrown out there … are we talking about an actual dollar amount?  Or are we talking “Palmetto math,” in which it costs twice as much to do the job half-assed?

It’s not immediately clear … but the distinction matters.

It’s also not immediately clear how much of the tab (whatever it winds up being) will be picked up by the federal government – and how much state taxpayers must shoulder.

One thing that is clear?  The complete and total lack of infrastructure prioritization that has plagued South Carolina in the decades leading up to this storm simply cannot continue.

State leaders no longer have the luxury of funding non-essential government – whether it be non-essential functions that have nothing to do with infrastructure or non-essential infrastructure.  In fact one reason this repair tab is so high is because our leaders have ignored infrastructure maintenance (a core function of government) in pursuit of subsidizing the nation’s worst government-run school system, a duplicative and inefficient higher education system, bailouts for wealthy corporations, shady ‘economic development‘ deals and … lest we forget … dozens of exorbitantly expensive and totally unnecessary highway projects.

Of course that’s not going to stop the state’s political establishment from launching an even more aggressive campaign to raise the gas tax.

UPDATE: See what we mean?

Rising Rivers And Lakes: A Science Project For SC Kids …

Had the roads been maintained before the flood the cost would have been half that. Now they can use the flood as an excuse for the condition of the roads.

Roads are not really that bad. The media, and the liberals – with their slimy lobbyists – have done a GREAT job of inventing a crisis, so the ignorant and Dumbassed, will sing in unison, to bilk us taxpayers out of billions of dollars, so they can waste it.

You really should get off your dirt road occasionally, the roads are in horrible shape. I’m sick and fucking tired of dodging potholes.

Why don’t you ask the people who constantly complain about the fact that I-95 is full of holes and remains a two-line in each direction slow-drive. Even Georgia has a better section of I-95 – three-lanes each direction all the way. Our roads are fit for horses.

Drive down I-95 in Georgia – it looks just like SC. And it’s not just I-95, they fund huge highways all around Atlanta. No, we’ve ignored infrastructure for a long time.

i drive from Spartanburg to Florida a lot thru rural GA a lot and GA has much better roads……our problem is that too many roads that in any other state would be a county road are state highways. we are a small state yet have the 5th largest STATE highway system.

Prepare for republicans to have sufficient cover to raise taxes in perpetuity for “disaster relief.”

Prepare for Haley to fall in love with federal dollars to repair roads she couldn’t care less about 3 weeks ago.

In the end thought that may be a good thing…her begging the federal government for dollars will not bode well for her VP aspirations.

Nikki likes a variety of positions. She isn’t even opposed to light bondage.

Hopefully Obama will make her put any request for funds in writing with her signature so he can frame it.

If the Legislature gives SCDOT $1.5 Billion, there is no doubt the Arch de Peckerhead will be erected in downtown Florence along with the Tomb of the Known Fucking Cockroach, a new Interstate to Myrtle Beach will be built, the remainder of 526 in Charleston will be finished and all the dams surrounding the chosen people in Forest Acres will be rebuilt, all roadways paved, bike trails added,cooling stations erected and warning signs posted, if you don’t live in this neighborhood, get the fuck out

Oh, if anything is left over danger signs will be placed strategically around all unfinished projects urging you to call your Legislator to fund the project

My mole in the State House just informed me that the Governess Haley has copied and pasted your comment as the official “Request for Funding Emergency – Federal Government”. My mole also informed me that Haley overlooked deleting your last two words.

Invoking “Cockroaches” is probably called for in the situation. Money is to politicians as filth is to Cockroaches. Brings out the worst in both species.

If the Citizenry were to ever receive their

If you give SC politicians 1.5 billion to spend, 1/3 will disappear in graft and corruption.

I think this flood truly reveals how DISGUSTING the character of FITSNews is.

Really, we need solutions for problems. Check your partisan bias, grudges at the door until they are solved.

But all I have aside from the basement of my mom’s house is my grudge for FITS, I tried running my own blog but we all see how that went!

If the House of Reps can’t even pick a Speaker, how in the heck are they going to agree to allocate $2 billion to SC for road repair.

In other news: “The number of Americans filing new applications for jobless benefits fell more than expected to a near 42-year low last week, pointing to ongoing tightening in the labor market despite the recent slowdown in hiring.”

In a related story: A record number of Americans have totally given up, after seven years of the most abysmal presidency in history.

5.1% unemployment, real estate prices on the increase, new car sales at record levels, manufacturing growth steadily up since 2010. Dow back over 17,000. Horrible. Worst ever. We except for the last guy – he was really bad.

Ok, Rocky. You seem to be defending Obama. What about Haley? Two months after she took office our unemployment insurance fund was indebted to the Feds for one billion dollars. Now it is in surplus and rebuilding an emergency fund.

In fact, while claims go up and down seasonally, for 301 consecutive weeks, including Gov. Haley’s entire term; the number of unemployment insurance claims recipients has declined year over year every single week.

A rising tide lifts all boats.

Sadly, it ain’t necessarily so.

My main point actually is, how do we get federal bucks when it would probably need to be included in the December CR for the rest of the fiscal year, and these bafoons can’t even pick a new Speaker?

Maybe the mistake you both are committing is attributing too much success(or failure) to the executive positions of President and Governor….

If inflation is factored in, the Gasoline tax in South Carolina has never been lower than it is now. The last increase was a penny in 1989. If the tax had risen to account for inflation, it would be over 30 cents a gallon today.

The graft and corruption is a separate issue from the tax rate, and should not be an excuse to avoid properly funding our roads infrastructure.

“The graft and corruption is a separate issue from the tax rate, and should not be an excuse to avoid properly funding our roads infrastructure.”

Sure it should. Why the hell would anyone in their right mind purposely throw money at an organization that pisses it away? It’s encouragement for the same behavior.

“Why the hell would anyone in their right mind purposely throw money at an organization that pisses it away?”

Yet the mouth breathers in this state will vote for anything so long as it has an “R” next to the name.

The cost of building and maintaining infrastructure is not necessarily defined by inflation alone. Depending on the circumstances those costs could rise above or below the rate of inflation.

We need the money!

10 Billion + sitting on the shelf that we need desperately.
Sell it today or at least collect the $5 to $7 Billion SC would get for taking it public!!!

The state usually needs to come up with a 10% or 20% match. If we liberate the $420 million appropriated to the I-526EXT boondoggle, that would be more than enough to cover our share of the $1.5 billion.

They better not stop sending us checks to pay for this mess!