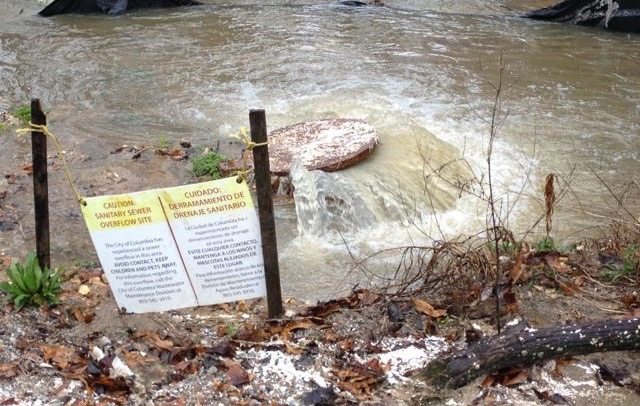 How bad did things get?

Just two years ago, city leaders had to pay $1.5 million on order of the U.S. Environmental Protection Agency (EPA) to cover fines and costs related to sewage spills.  Two years before that, the EPA threatened to take over Columbia’s wastewater management operations due to chronic neglect.

Has the city responded by better prioritizing this core function of government?

Of course not.  City leaders have instead continued pumping taxpayer money into totally unnecessary projects – at the expense of fixing the water and sewer system.  Just this spring, in fact, Benjamin took $4 million out of the water and sewer fund and put it into the city’s general fund – where he could spend it on his pet projects.

About as good as Benjamin’s over-budget baseball stadium.

Benjamin’s plan was ripped months ago by city councilman Moe Baddourah, who published a letter to the editor in The (Columbia, S.C.) State newspaper saying it was “difficult for me to accept that a wonderful city such as ours – with its abundant resources and unlimited potential – can’t meet our most fundamental obligations.”

Baddourah added that unnecessary projects – like a controversial $71 million Bull Street redevelopment – were being funded instead of critical infrastructure.

“Our priorities are skewed,” he wrote.  “Grand pursuits such as Bull Street and the new stadium seem to take precedence over essential services that directly impact people’s quality of life.”

Benjamin obviously hasn’t been alone in his failure, though.  Former councilman (and convicted felon) E.W. Cromartie was a big part of the problem – same with current councilman Sam Davis, who consistently votes with Benjamin in support of wasteful projects.  You know … projects like “Innovista,” a spectacularly failed higher education boondoggle funded by city and state taxpayers to the tune of tens of millions of dollars.

What should they have spent that money on?

Sources close to the city say two outdated water mains are the root cause of the problems.  One traverses Midlands Technical College, and the other traverses Trenholm Road in downtown Columbia.  Money was appropriated to fix these two main trucks, but it appears as though the cash was siphoned off.  As a result the two main trucks received incremental repairs rather than replacing the aging pipe with new, state-of-the-art materials allowing for growth and better service to existing customers (especially in times of crisis).

The other culprit?  The continued expansion of the city’s water and sewer system at the behest of a select few as opposed to the many it is intended to serve.  Access to water and sewer services helps drive real growth – residential and small business.  It’s clear at this point the city should have better managed its water and sewer resources to serve existing customers rather than allowing wealthy, politically connected developers with narrow agendas to dictate when, where and how the system was expanded.

Again, though … they didn’t.

Mother Nature this week proved the folly of Columbia’s “leaders” – and now city taxpayers must pay to clean up the mess they’ve created.  Our hope?  That this crisis will focus the attention of Columbia citizens – and that they will at long last insist that their leaders start prioritizing core functions for a change.