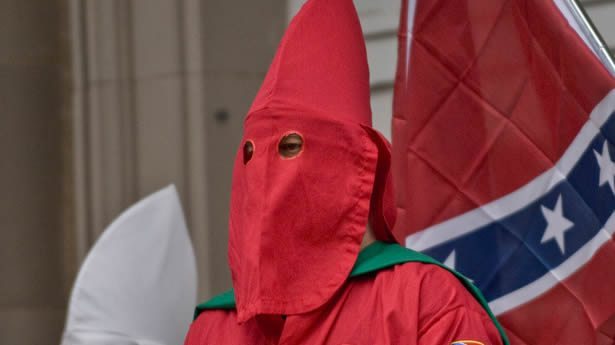 … GUESS WHO ORGANIZED IT?

|| By FITSNEWS || Remember that Ku Klux Klan rally in South Carolina earlier this year? The one that turned violent?

The North Carolina-based KKK group which organized the demonstration is … get this … led by an undercover federal agent.  In fact he’s the one who invited members of the National Socialist Movement (NSM) – a.k.a. the neo-Nazis – to participate in the rally.

Christopher Eugene Barker, a North Carolina Imperial Wizard, is “an undercover agent for the U.S. Federal Bureau of Investigation – working for and protected by the U.S. Joint Terrorism Task Force (JTTF),” according to freelance journalist Nate Thayer.

Not only that, according to The (Albany, N.Y.) Times Union, recordings made by Barker as part of his deal with the government – at the direction of the government – were recently introduced as evidence in the trial of Glendon Scott Crawford.

Crawford has gained internet infamy for his plan to construct and use a “mobile death ray” against Muslims.

“Barker says he plead guilty to a federal charge of possession of a firearm by a convicted felon in 2012 and spent two years in several jails for that charge,” Thayer reported.  “But government documents show he was released after six days in jail in August 2012. That is one of numerous criminal charges made against Barker in several jurisdictions for everything from drunk driving to beating up his wife to burning down the house of a nemesis.”

“While sitting in the can, on August 10 he called the FBI and sold the government this ridiculous story about how he had information of a plot with enough explosives in New Jersey to blow up New Jersey and New York together,” a source told Thayer.

In addition to ratting out his fellow white supremacists in an effort to stay out of jail, Barker has been ramping up the rhetoric in the “race war” – in a big way.

“The KKK would like to say hail victory to the young warrior in South Carolina, Dylann S. Roof who decided to do what the Bible told him,” Barker said in the aftermath of the Holy City Massacre, this spring’s horrific church shooting in Charleston, S.C. “If we had 10,000 more men like this young man, America would not be in the shape that it is in now.”

And yes, Barker’s over-the-top response was picked up by the “progressive” media and used to foment outrage in the aftermath of the massacre. We wonder: Will these same media outlets report on Barker’s status as a government informant?

Look, we rebuke the KKK.  We respect its First Amendment right to organize, communicate and demonstrate, but we reject its racist teachings and its support for race-based violence – just as we reject Farrakhan’s call for an army of blacks to “rise up and kill those who kill us.”

But in this case it’s important to identify who is stoking the fire … your government.