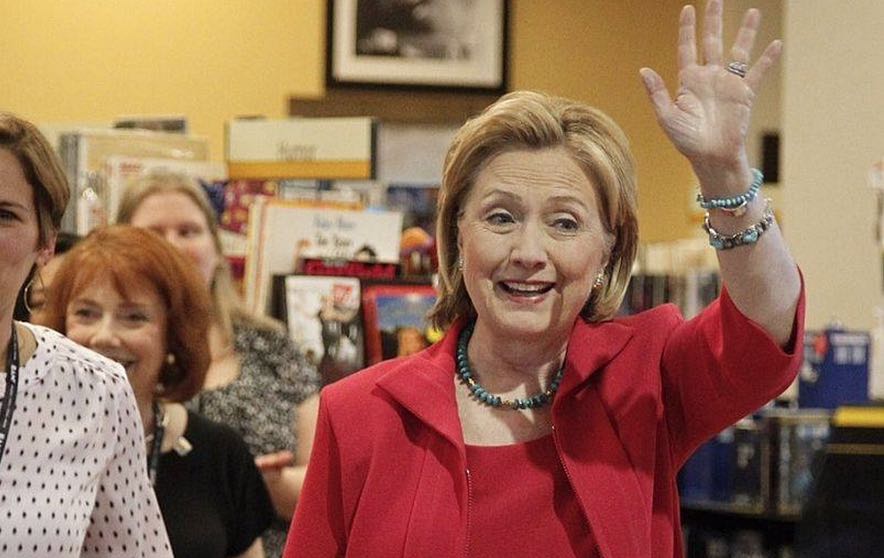 DEMOCRATIC FRONTRUNNER LOSES A THIRD OF HER NATIONAL SUPPORT

|| By FITSNEWS || Think that email scandal is finally having an impact?

Clinton is now backed by 42 percent of “Democrats and Democratic-leaning independents who are registered to vote,” according to the survey.  That’s good enough for an eighteen point lead over independent socialist U.S. Senator Bernie Sanders of Vermont and a 21-point lead over U.S. vice president Joe Biden – who is thinking about jumping into the race.

Back in July, Clinton led Sanders by a 63-14 percent margin – a whopping 39-point lead.  Biden drew only 12 percent in that survey.

On the GOP side, frontrunner Donald Trump has seen his lead continue to grow among “Republicans and GOP-leaning independents.”  Thirty-three percent of these voters are now behind Trump – while 20 percent favor retired neurosurgeon Ben Carson.

Trump’s support has grown by nine percentage points over the last two months, while Carson’s support is up 14 points.

Former Florida governor Jeb Bush – who was polling at 21 percent back in March – now draws only eight percent support, putting him barely ahead of U.S. Senators Ted Cruz of Texas and Marco Rubio of Florida, both of whom are polling at seven percent. U.S. Senator Rand Paul of Kentucky is in sixth place, drawing five percent support.

Meanwhile Wisconsin governor Scott Walker – who was polling at eleven percent in July – has seen his support plunge all the way down to 2 percent.

Langer surveyed 821 registered voters by landline and cellular telephone from September 7-10, 2015.  The survey’s margin of error is plus or minus four percentage points.

State House Probe Back In The News

Duh….LMAO…That’s OLD news, even it pains you to admit it…

LOlz. Aren’t they both too old for goop generation?

Which one?…or will you not commit since Hillary turned out to be such a disaster.

Are you saying Hillary is NOT a woman?

Wake up America, Republicans hate brown people, black people, yellow people, gay people, people who don’t hate gay people, working women, poor people, women who don’t think they are subservient to men, people who believe we should educate everyone, people who don’t die when they are too old or too sick to work. women who get raped (because its probably their fault), women who get pregnant after they are raped (because they secretly enjoyed it), people who bring up facts, middle class people, people on Social Security, people on Medicare, Hindus, Muslims, Buddhists, atheists, Catholics (who don’t hate the Pope); and in general anyone who doesn’t agree 100% with them (which is generally anyone who thinks the late nineteenth century sucked for most people).

Was that intended for Wake up America! Because I believe Goebbels’s propaganda was directed against, communists, labor unions, jews, gay people, and ethnic minorities. You know, non-Aryan Europe. As I said sounds a lot like the modern Republican Party.

In all fairness Jan, hate is a strong term. Republicans don’t really hate hate most of the people you identified (some of them yes, but not most); As Romney said they just don’t give a shit what happens to them. They are unimportant, as they are largely part of the 47%.of the country Republicans can’t be worried about.

Not in the mood for wasting time insulting others or getting insulted, but as one of the few registered Dems here – I didn’t vote for her in 2008, didn’t want to vote for her now. If she tanks and Joe enters the race, that’s just fine with me.

Always disavowing who, and what, you are, when it manifests. Very typical.

And will you be FOR Joe, before you are Against him, when he begins to tank?

And what about Bernie? (Weekend at Bernie’?) He is a Obama-Socialist-Democrat. Why hate him? You love Obama…

And you love poop in your pants – or so you indicate.

Democrats are even losing women. Hillary is down from 61% to 31% with women because of honesty and her radical stance on Planned Parenthood.

Wow…how you turn on a sister. Why do you HATE women?

Hillary is against partial-birth abortion and infanticide. Pisses mama-abortion off.

Man, you’re really obsessed with what comes out of woman’s private parts. Must of use men are more concerned with what can go in. You might be looking at this backwards. Just an idea.

I am concerned that you Hitler types that make up the Democrat Party no longer value the sanctity of life and that aborting children is your religion.

When a society doesn’t protect the most vulnerable in our society INCLUDING the elderly (Obamacare rationing and Death Panels) we are doomed for destruction.

Ain’t my religion. I think you’re a little too obsessed there buddy.

You appear to be obsessed about ‘poop’. Carry on.:)
Everybody is ‘obsessed’ to a Democrat when somebody disagrees with them.Democrats just can’t believe somebody would stand up and express a different opinion-like Obama.

We are all supposed to sit down and shut up.Them days are over. Only way to defeat Democrats and liberalism is to get down in the sewer with ya. It gets muddy and stinks at times however it is the only way to root out the evil and save America.

You may to sensitive for this blog.

Poop is for GT>

As I recall the Nazi went after Communists, people in labor unions, gay people, racial minorities and non-Christians. Sounds a lot like the modern Republican party to me.

Oh.As I recall they hated Jews and gassed millions in ovens.Obama and Democrat Party going high tech by giving nukes to Iran.

Doesn’t stop you from calling Bernie Sanders, a Jewish person himself, a Nazi now does it?

History if you’re going to talk about it LEARN IT!

You can dislike one woman without disliking one hundred million plus women.

I dislike Fiorina. I dislike Hillary.

Everyone here dislikes you and Flip.

doesn’t mean he supports her

I said she’d win. I didn’t say I’d support her. I would much prefer Joe. If he doesn’t run, I’ll have to support her. But if he enters the race, I’ll support him. He’s a better choice without the baggage.

Just once I’d like to actually cast a vote FOR a candidate instead of against another. This lesser of two evils nonsense is tiresome.

I actually like Joe. He’s had the experience, 8 years as VP, great knowledge of domestic economic policy and foreign affairs. And Tango hates him, which is a real plus.

Joe is a lying,plagerizing racist(per his own words) pervert(per the (Secret Service) that would be an Obama 3rd term and the American people are rejecting that.Only 30% say they would want an Obama 3rd term.

It is also really sad to see Biden use his deceased son for sympathy on late night comedy shows.No character. Also a rumor that Biden may be at the early stages of Alzheimer’s?

Well then he should a lot of cross-over appeal to GOP voters.

Yes, the electorate next year will be anxious to get the Obama Presidency behind them. Obama, and all his signature efforts are upside down in the polls.
No chance any Democrat will get elected on his coattails.

Excellent.However Obama is a narcissistic ego maniac and will demand Democrats run on his ‘coattails’ and agenda if they want his support.

He has destroyed the Democrat Party in 8 years and why they are left with retreads and old folks like Clinton,Biden and Sanders. NO young talent as they have all been defeated by the Republican Party the past several years.

Obama will bury the Democrat Party in 2016.

Not for long, Rocky. She is on the way, way down. She will not recover, the DEMs are in a panic. And Good Ole Joe is not the answer.
Usually appears this way, one firm candidate in one party beating anyone of the other party’s Candidate. Wait till the field narrows down for the Republicans. Of course, by then. Hillary will be a shit stain on the underwear of politics.

You are correct.In the last 3 weeks her lead has disappeared. RCP goes back months. She is finished.

Panic? Nah. Re-calibration – maybe. It’s not like we have a huge revolt in our party – with our leading candidate having a gender gap of 50 points.

Everything I saw was within the margin of error, but technically she is beating two Republicans by less than a point. With three candidates against her all within the margin of error, that does not bode well for her, her trend is down with no relief in site.
I hope she stole all the White House silverware, China, and other items on her first trip through there with Bill, she will not get another chance.
Just go to Chappaqua, and live off all the money they stole through the Clinton Foundation.

You don’t have ANY room to tell ANYONE, ANYTHING about character. You have NONE.

Hey vic. Give us predictions for 2016.You didn’t get ONE political race correct in 2014. NOT ONE. We put your election predictions up on our board last November on election night and toasted the fact that the Democrat Party has been infiltrated by uninformed political prognosticators.

What a resoundingly awesome and true comment. Kudos to you kind sir for speaking what’s on everyone’s mind.

Did you get the poop out of your pants?

Yes, more than once. Fortune telling is not in his future.

??google work providers earn $98 hourly……….After earning an average of 19952 Dollars monthly,I’m finally getting 98 Dollars an hour,just working 4-5 hours daily online… three to five hours of work daily… Weekly paycheck… Bonus opportunities…Payscale of $6k to $9k /a month… Just few hours of your free time, any kind of computer, elementary understanding of web and stable connection is what is required…….HERE I STARTED-TAKE A LOOK AT
…….yg..

ON a side note moron, on Real Clear Politics average – she still laps the GOP field.

She is trending down, with no relief in site.

Could be. Hence Joe in the wings.

You’re being a bit nearsighted if you think those numbers don’t have plenty of time to change.

And you are being naive if you think more bad news won’t come out about Hillary to further diminish her numbers.

The US has become a land of extremes- the economy, which now primarily benefits Wall St.- is still pounding the middle class despite the low unemployment. There are many more working poor now due to onerous taxes & inflation that favor the rich & poor at the expense of the middle class.

This has created an environment similar to Weimar Germany, were the people are looking to extremists on either side of the current paradigm to “solve” the issues:

Trump on the right, Sanders on the left.

Either way, it’s not going to be a story with a happy ending.

While it is obvious she has lost support, she was NEVER going to maintain the ultra high support she started with, once the campaign progressed.

McCain and Kerry were both written off for dead, long before they eventually came back and won their respective nominations.

Howard Dean was riding high before he crashed. When Trump first started a few months ago, his negatives were sky high and a huge chunk of GOP voters said they would never support him. Now he is far ahead of the field.

Early polling isn’t meaningless because it impacts fundraising and determines momentum, but to say it is a predictor of the eventual nominees is simply not true and never has been in modern times.

“McCain and Kerry were both written off for dead..”
Yeah, but there were not criminals with the chance of being indicted.
The Clinton’s are like the Bush’s, No…Nevermore.

This just hit the wire this afternoon…There is a five month gap in the emails that Hillary turned over to the State Department.

This could be Hillary’s eighteen minute gap in the tapes that Nixon encountered.

Hillary is now toast. At long last, the day I have waited for: the Celebrity Left is publicly calling for Elizabeth Warren to run for POTUS. And Bernie continues to be her John the Baptist.http://www.washingtonpost.com/news/the-fix/wp/2015/02/03/michael-moore-and-mark-ruffalo-want-elizabeth-warren-to-run-for-president/