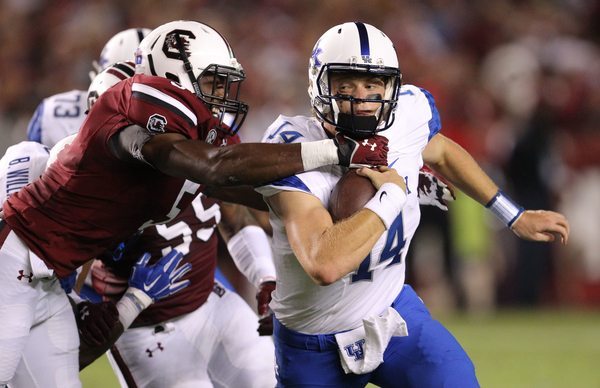 Head coach Steve Spurrier‘s Gamecocks lost at home to unranked Kentucky on Saturday night – a heartbreaking 26-22 defeat that stung even more than last year’s soul-crushing loss in the Bluegrass State.

Unlike last year – when South Carolina got run over late in the fourth quarter – the Gamecock “D” turned in a dominant second half defensive performance.

Down 24-7 at halftime, South Carolina’s defense came out of the locker room looking like a completely different squad – holding Kentucky without a first down on offense until the middle of the fourth quarter.  After getting gashed for 307 yards during the first half, co-coordinator Jon Hoke and Lorenzo Ward‘s unit gave up just 92 yards during the second half.

Unfortunately, multiple defensive stops didn’t translate into points.  Spurrier’s offense had to settle for field goals on three consecutive scoring drives – and when the Gamecock offense finally did find pay dirt, a botched two-point conversion wound up making the difference in the game. 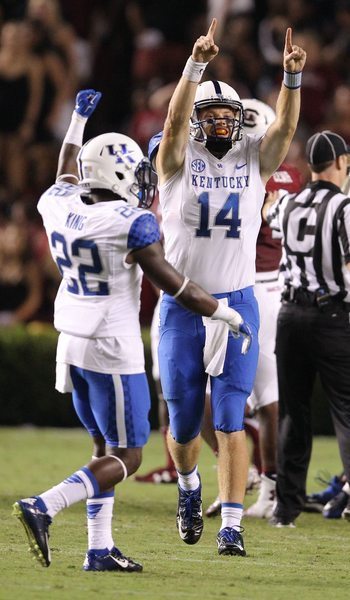 After backup quarterback Perry Orth hit tight end Jerrell Adams for a 33-yard touchdown strike, the Gamecocks (1-1, 0-1 SEC) were a two-point conversation away from tying the game with around eight minutes left.  Preseason All-SEC wide receiver Pharoh Cooper fumbled on the conversion attempt, though, and Kentucky’s freshman defensive end Denzil Ware scooped up the ball and returned it 95 yards for a 2-point Wildcat score.

That four-point swing sealed South Carolina’s fate when Orth threw an interception on the Gamecocks’ ensuing possession – enabling Kentucky to run out the clock for only its third SEC win under third-year head coach Mark Stoops.

And yes: Two of those wins have come against the Gamecocks.

Kentucky has played terrible on the road for years.  In fact the Wildcats (2-0, 1-0 SEC) hadn’t beaten anybody on the road in 22 games – and hand’t won an SEC road game in six seasons.

They shouldn’t have won this game, either – but Orth’s interception bailed them out.

A 6-foot-1, 203-pound junior from Ponte Vedra, Florida, Orth completed 13 of 20 passes for 179 yards and one touchdown in relief of starter Connor Mitch, who left the game in the first half with a separated shoulder after attempting to recover a fumble. 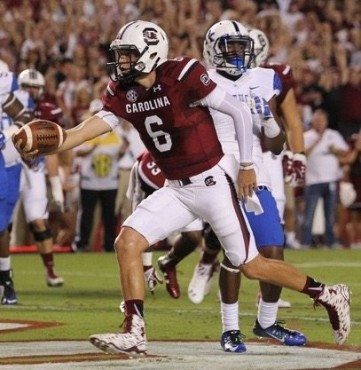 Mitch’s injury was originally reported as a shoulder sprain, but Spurrier revealed its severity after the game and acknowledged it was likely to knock him out for the season.

Orth, a former walk-on, played a brilliant game until he was flushed from the pocket on a first down play from Kentucky’s 37-yard-line with just under four minutes on the clock.  Attempting to throw across his body, Orth was picked off by Wildcat defensive back Chris Westry, who was ruled down by contact after coughing up the football himself (a call confirmed by video replay officials).

It was Orth’s only miscue of the gme – but it was a dagger in the heart of Gamecock fans, who appear to be trending back toward their long-established “long-suffering” status.

After enjoying four years of unprecedented gridiron success from 2010-13 (including three consecutive 11-win seasons, three straight Top Ten finishes and three straight New Year’s bowl victories), South Carolina has slipped back into the mediocrity which defined the program for much of its first century of competition.

The Gamecocks went 7-6 a year ago, and are well on their way to another middling season this year – if they’re lucky.  Worse still, Spurrier’s staff is getting out-recruited by in-state rival Clemson – even though head coach Dabo Swinney‘s Tigers lost five straight to the Gamecocks from 2009-13.

South Carolina travels to Athens, Georgia next week to take on the tenth-ranked Georgia Bulldogs.  The next week the Gamecocks host Central Florida before traveling to No. 21 Missouri on October 3.

Connor Mitch Out For The Season

Some Love For Skai Moore