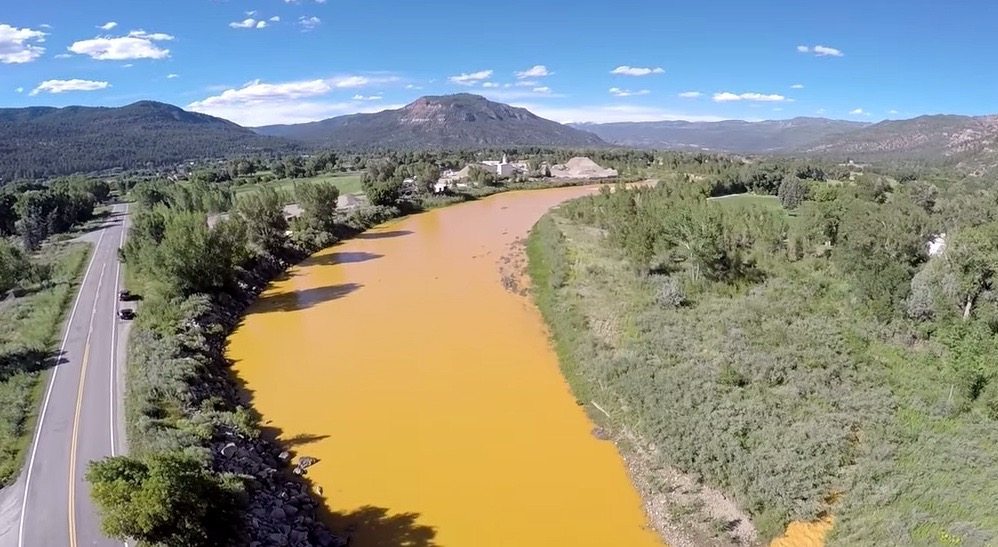 || By FITSNEWS ||  The Environmental Protection Agency (EPA) – which is attempting to regulate every puddle in America – spilled more than three million gallons of toxic waste into the Animas River in Colorado last week, creating an eighty mile plume.

Here’s what the disaster looks like from the air …

According to the agency, an EPA “cleanup crew” was attempting to enter the abandoned Gold King Mine near Durango, Colorado.  During their efforts, they knocked over a rock dam  – releasing a torrent of polluted water laced with arsenic, lead, copper, aluminum and cadmium. Original reports indicated one million gallons of waste, however that total was quickly updated.

Oh, and the list of contaminants released was updated to include mercury and selenium.

Here’s a look at the location of the breach … 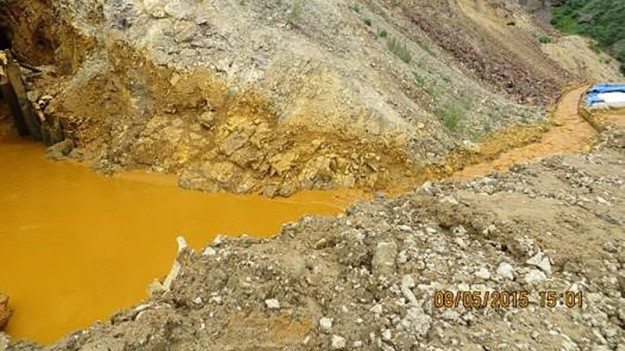 Oh, and guess what … the EPA waited a day to inform the public of the accident.

The massive spill has prompted the city of Durango and La Plata County, Colorado to declare states of emergency.  Neighboring states are also bracing for the impact of the plume.

“The magnitude of it, you can’t even describe it,” New Mexico governor Susana Martinez told local television station KRQE as the toxic sludge approached her home state.

“We are very sorry for what happened,” a regional EPA director said in the aftermath of the disaster. “This is a huge tragedy. It’s hard being on the other side of this. Typically we respond to emergencies; we don’t cause them. It’s something we sincerely regret.”

Of course another EPA official quickly added that while “the orange color is alarming to people … that is not an indication in any way of a health risk.”

Should we believe them? Hell no.

Rayna Willhite, of Aztec, holds a bottle of water collected from the Animas River that contains mine waste. pic.twitter.com/fTip9LGsDu

Seriously: You gonna drink that?

A tributary of the San Juan River, the Animus is part of the Colorado River system.  It runs for an estimated 126 miles through Colorado and New Mexico.

Naturally, the mainstream media isn’t giving the incident wall-to-wall live coverage because the government caused the mess … not a corporation.  But at least some elected officials in the area are demanding the agency be held accountable.

“If a mining operator or other private business caused the spill to occur, the EPA would be all over them,” U.S. Rep. Scott Tipton of Colorado said. “The EPA admits fault and, as such, must be accountable and held to the same standard.”

Meanwhile environmentalists are livid at the agency for delaying to notify the public about the disaster – and for downplaying the health and environmental risks. One group, the Arizona-based Center for Biological Diversity said the spill could be devastating for endangered species in the area.

“These species are hanging by a thread, and every new bit of toxic exposure makes a bad situation worse,” the group said in a statement, adding the “EPA’s downplaying of potential impacts is troubling and raises deeper questions about the thoroughness of its mine-reclamation efforts.”