According to this week’s Economist/YouGov poll, the new frontrunner for the “Republican” presidential nomination is none other than … “The Donald.” 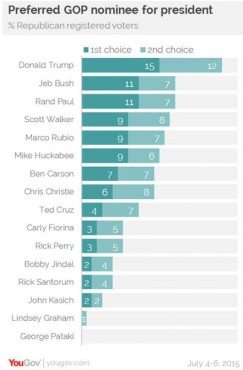 “Trump looks even better as a candidate this week when Republicans are asked for their second choice,” YouGov’s pollsters noted. “When they are, Trump extends his lead. One in four Republicans who are registered to vote say he is their first or second choice.”

Well … he’s at war with Mexico.  And political correctness.  And lots of “Republicans” eschew Mexicans.  Which is politically incorrect.

Of course there’s a catch …

“Trump supporters may be making more of a statement than voting for someone they consider a contender,” the pollsters added.  “Just one in five of Trump’s supporters think Trump will win the nomination.”

Who do they think will win? 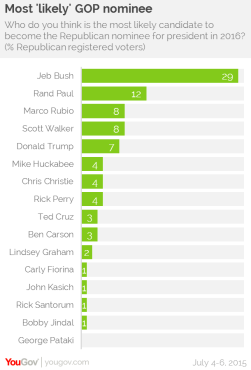 Related Topics:Donald TrumpJeb Bush
Up Next