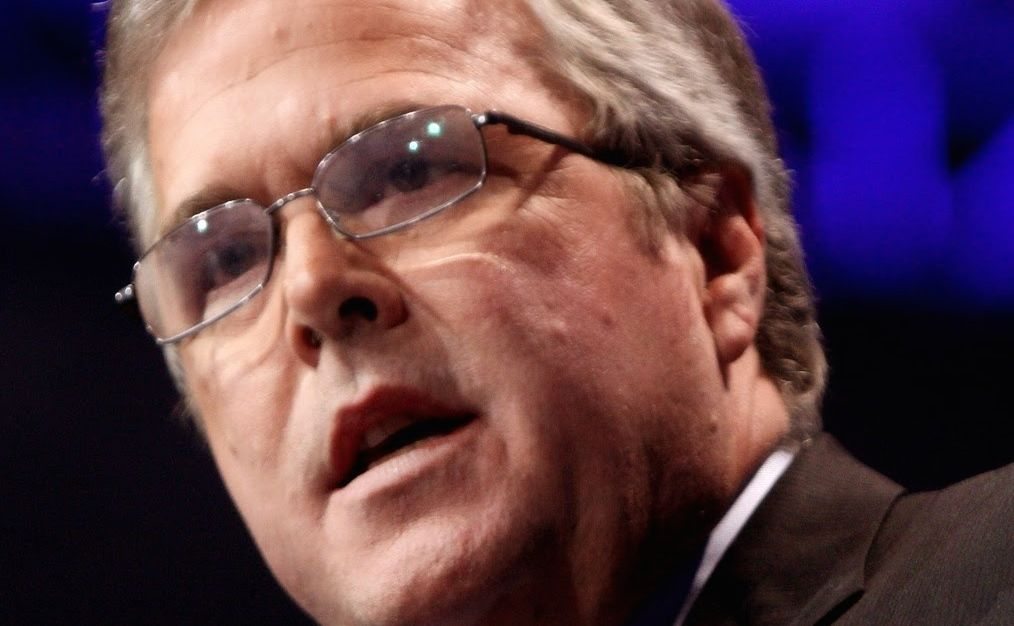 || By FITSNEWS || Buzzfeed’s McKay Coppins has a great piece up this week about former Florida governor Jeb Bush‘s campaign swing through … Europe?

That’s right … while other candidates are busy on the ground in early voting states like Iowa, New Hampshire and South Carolina, the “Republican” establishment’s first choice will be giving speeches in Berlin, Warsaw and Tallinn this week.

Why?  Because Bush wants to be seen as standing up to Russian president Vladimir Putin.

“If all goes according to plan, Jeb Bush will end this week with a superlative worthy of a campaign bumper sticker: Vladimir Putin’s least favorite Republican,” Coppins wrote, adding Bush will “lay out his vision for a more aggressive American stance against Russia, and illustrate what he considers to be the failures of President Obama’s weak-kneed response to Putin’s recent aggression in Eastern Europe.”

Oh, and upon returning stateside, Bush will be announcing his presidential candidacy (… again).

Look, we get that “Putin hate” is all the rage right now among”Republican” warmongers, but look just below the surface of all that “Russian aggression” and you’ll find some pretty galling U.S. hypocrisy (and needless agitation).

America has already intervened in Ukraine, helping orchestrate a coup to overthrow the county’s popularly elected government (so much for “spreading democracy”).  Now Jeb Bush is going to take a page from liberal financier George Soros‘ book and say more intervention is needed?

While scoring points with impressionable GOP voters in the process?

Bush can saber-rattle all he wants, but the bottom line is America can’t afford a new Cold War.  And the more we try to start one, the more we drive Russia and China into each other’s arms (to the extent they need any help on that front).

I’ve often wondered how much of the animosity in recent decades, between us and Russia might be manufactured, or at least stoked, by our military and intelligence services as justification for their exisence. I am speaking of course, of the upper levels, to include the politicians.

People like Jeb and Lindsey just add to my suspicions.

What a surprise, Pogo says he’ll leave for the 80th time, comes back a day later. No life, no job, no morals, no decency. I bet my tax dollars are paying for your stuff so you can come here and bother everyone instead of getting a job. No wonder you want higher taxes.

Fuck you! I know everything.
You be in a hole
I be a mole
I got a toe
My name is Mo

I love my new medication!!

Exactly the type argument those I was speaking of have used and apparently still do.

The Plant City, FL city attorney may frown upon your use of the city’s name here. It looks like an official endorsement of your comments by the city of Plant City, FL.

Plant City,FL? Didn’t know there was one? Sorry.I am a dumb fuck bitch.I get confused on my medication and use multiple accounts-some without an avatar.

Flip, Pogo, Sandi, whoever the fuck you are take notice. Evil spells are being cast in your direction.

Come forth I summon you I beseech you…Come forth to our Realm…I offer you sanctuary here where you may carry out your evil deeds upon thy Enemy…Fort though shall harm them as they have harmed me. Come for to this Object I have chosen..In acceptance that you do not harm me but the one I have called you forth…Now come Demon! This Item is now your new stomping grounds…Become one with this…

Wanted to make sure you saw it.

Oh.Thanks.Plant City,FL never crossed my mind.
Since FitsNews only has about 15 regular contributors, I ain’t worried.

Don’t worry. He’s a personal friend. I’ve already let him know you are infringing on their online presence. He’s filing paperwork with the copyright office.

LMAO!!!The only friend you got at 1:30 A.M. posting on FitsNews is that bottle of Jack Daniels, ya fucking drunk.

Some of us work nights and get home about 1ish. Reconsider your accusations.

I don’t think they need animosity with Russia to justify their existence. ISIS and Al Qaeda make that unnecessary.

You may have a point, BT!

ISIS and Al Qaeda were manufactured by the CIA and the other intelligence services, at least in the beginning and maybe more recently.

The Mujahideen was equipped and trained by the CIA to fight the USSR in Afghanistan. They later became Al Qaeda. I understand the logic behind it the enemy of my enemy is my friend, but it did backfire on the USA pretty bad.

ISIS is the leftovers of the Iraqi Army that the US equipped before leaving. They defected and helped fight the against Assad in Syria, before becoming more violent and power hungry.

Maybe instead of allying with petty dictators in the middle east, who subscribe to a violent and non-reformed religion, we should work on allying with Russia. The Soviet era is over and we have much more in common with the Russia people and their leadership than we do with the violent, Islamic, Theocratic countries of the middle east.

All your tortured logic leads nowhere. If the Mujahideen had not been supported the Soviet Union might still exist and Eastern Europe might still be occupied. We still might have tens of thousands of troops in “West” Germany.

They would have likely been much less well equipped, armed and trained if we hadn’t supported them. We likely would have avoided 9/11 or at least delayed it significantly.

As I stated I understand why we did it, and at the time it was probably the right thing to do, but hindsight being 20/20 their may have been another way. I’ll make my point more succinctly.

Make friends with Russia, and avoid entanglements in the Middle East. Russia would be a powerful ally and both countries have natural resources that compliment each other. Combined we would control over 1/2 of the land in the Northern Hemisphere and could easily shutdown other’s ambitions.

You don’t control anything anymore ! You are propped up and nothing but a ‘paper tiger’ – no more Empire – bonne voyage the next few decades

Again hindsight being 20/20 this is a better state of affairs than we currently have. A known enemy that acted in a predictable manner.

“If the Mujahideen had not been supported the Soviet Union might still exist and Eastern Europe might still be occupied.”

Fiscal insolvency is was what ended the Soviet empire, not the Mujahideen. The cost of fighting them was a pittance compared to all the other fiscal problems the USSR had going on.

And fiscal insolvency will end the US Empire too!

You definitely have a point, Easterndumbfuckistan!!!!

We go through this every four years. Russia bad, Russia big threat. Russia on the move. Let’s see, they took an island from Ukraine and have 3,000 “off duty” troops helping a bunch of ethnic Russians in a swath of area about the size of Lexington County. They are NOT the military threat anyone claims they are, given the nuke option is and has always been, off the table. So……. a third world country, with an economy smaller than Brazil, income falling, an economy in decline. Oh boy – they a big issue. We’re going to play the “they could be invading Poland” game again. Clue – Poland alone could kick their ass. This is designed to look like the “tough” guy, then if he wins election to payoff the defense industry by spending an extra $200 billion a year on stuff to stick into Poland and the Czech Republic and declare “victory” as our deficit explodes. God, can’t they get new ideas? Just an example, but last summer, the Ukrainians deployed spotters in the woods with cell phones, brought down an artillery barrage on a Russian battalion that suffered 150 dead, 250 wounded, one company of 200 got lost and were captured, and the rest ran away. And these were the elite paratrooupers. Yeah, they’re really scary.

Great. The Croon Crew is going to Moscow and St. Petersburg next month, and Jeb’s posturing is going to mess up my warm welcome.
I wonder if my Bernie Sanders swag will mitigate.

Just let em know that there are a lot of us who don’t support the Bushes, Miss Lindsey, McCain, and like idiots. We’re not all like them.

The GOP always needs to have an ‘enemy’ to keep us scared and us wanting to be protected. Communism was always a good foil, but they needed Muslims when the USSR went away. With Russia strong again, they can be up to the task again.

I have decided that is much more profitable to eat Russians, than to fight them. I’d like to start with this one, please – http://www.rbrides.com/russian-brides-journal/images/russian-women7.jpg ………… what?

I don’t know about “profitable” but it would be quite pleasurable to eat her!!!!

Jeb is just another belligerent talker who has never served a day a uniform.