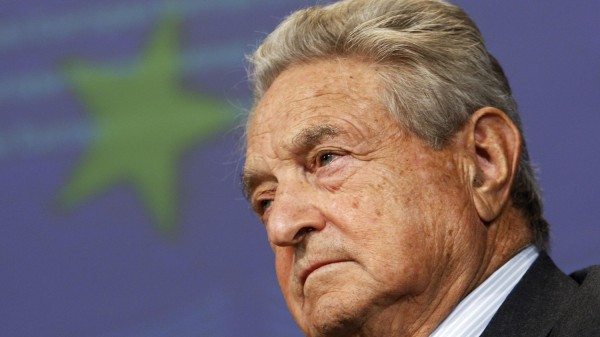 || by RON PAUL  || If you look at the track record of the interventionists you might think they would pause before taking on more projects. Each of their past projects has ended in disaster yet still they press on. Last week the website Zero Hedge posted a report about hacked emails between billionaire George Soros and Ukrainian President Petro Poroshenko.

Soros is very close to the Ukrainian president, who was put in power after a US-backed coup deposed the elected leader of Ukraine last year.  In the email correspondence, Soros tells the Ukrainian leadership that the US should provide Ukraine “with same level of sophistication in defense weapons to match the level of opposing force.” In other words, despite the February ceasefire, Soros is pushing behind the scenes to make sure Ukraine receives top-of-the-line lethal weapons from the United States.  Of course it will be up to us to pay the bill because Ukraine is broke.

But Soros seems to have the money part covered as well.  In an email to Ukrainian leaders, he wrote that Ukraine’s “first priority must be to regain control of financial markets.”  Soros told Poroshenko that the IMF would need to come through with a $15 billion package, which was confident would lead the Fed to also come through with more money.  He wrote: “the Federal Reserve could be asked to extend a $15 billion three months swap arrangement with the National Bank of Ukraine.  That would reassure the markets and avoid a panic.”

How would the Fed be convinced to do that?  Soros assured Poroshenko: “I am ready to call Jack Lew of the US Treasury to sound him out about the swap agreement.”

So George Soros will use his influence in the US government to put the American people on the hook for a bankrupt Ukraine — forcing us to pay for weapons, more military training, and Ukraine’s crippling debt.

Who is thrilled with Soros’ drawing the US government into more intervention in the region?  The military-industrial complex for one is happy at the prospect of big weapons “sales” to Ukraine.  The bankers are thrilled.  Washington power-brokers are thrilled.  There is something in this for everyone who is politically well-connected.  The only losers are the people who will be forced to pay for it, the American taxpayers.

No one seems to ask why we are involved in Ukraine at all.  Is it really any of our business if the east wants to break away from the west?  Is it a vital US interest which flag the people wish to hang in Donetsk?

One thing we should be sure of is that Ukraine’s debt will not be paid.  As in other bailouts, much of it will be transferred to the US taxpayer through the IMF and the Federal Reserve.  All of this is only possible because of the perception that the dollar is still the world’s reserve currency.  But this too is coming to an end.  US military and financial interventionism worldwide are only speeding up the process.

New sheriff in town.Serious debate is gone.Minds have been twisted like a pretzel with non stop garbage about failed service,family and espionage type techniques.

The only twisted mind in this discussion is yours. Must be hard to have original thought with all those alternate personalities running around.

Your vacations are planned through
AA instead of AAA.

In the middle of a family reunion,
FBI cuts power to ranch.

Bikers next door always complaining
about the noise.

You have to buy separate greeting
cards for each of Mom’s personalities.

“I’ve never seen a FITS article so absent the regular banter.”
———————-
I, Bible Thumper, also emailed Poroshenko. I told him I he needs modern weapons and that I was going to contact the IMF and Jack Lew to arrange financing. I’ve told Georgie not to get involved. He’s too controversial. Besides he doesn’t have the influence that I do. It’s true. Everybody knows that all I need to prove it is to produce the emails. Because emails are definitive proof, right?

Mmmmmm … Not many people know that George Soros is also an arms dealer, too.

Soros is doing this all for his usual self-interest. I’m betting He has a short position in US Dollar$ and is long (again) on the Euro. Boosting the IMF/EuroTrash/quasi-socialists’ plans to take over the Ukraine, would make that “smart money” play worthwhile.

Now that this cat is outta the bag, Soros will of course reverse his positions when appropriate, like maybe just after BummerCare is anal-ated by the Supremes and the US equities markets take a big jump up (followed by inflation of the US$ Dollar).

That’s the best you can come up with? Weak…

Is that the best fits and you can do; building a conspiracy from a few emails?

You think he invents this out of thin air? Paul was drafted during the Vietnam war, served twelve terms in Congress, and was on the House Committee of Foreign Affairs. His foresight on foreign policy is uncanny. What on your resume gives you the right to disqualify whatever doesn’t fit your worldview?

Dr. Paul wants to make sure you have an opportunity to enter your name in the giveaway. The AR-15 will come engraved with his personal signature and Campaign for Liberty’s logo.The deadline to enter their free giveaway is Tuesday, June 30 at 11:59 PM EDT.

Click here for your chance to win a customized AR-15!

Campaign for Liberty will contact you via email if you are the winner.

Thank you for your support of Campaign for Liberty.

Aww….here is the link for the fundraiser. Please sign up and expect daily emails requesting funds for various liberty causes. http://www.chooseliberty.org/customizedar15f.aspx?pid=0609a

You can’t have enough AR -15s, but I can’t contribute to Paul’s organization because he won’t accept gold. I’ve converted all my cash to gold.

LMAO – so you got the humor! Have a great night.

There is no debate because the right doesn’t know which side is up in this article. George Soros is pushing Obama to do what the GOP has accused him of not doing, and thereby showing a lack of leadership, and Paul is warning Americans Obama may be influenced by Soros to do what Republicans have criticized him for not doing.

Now Republicans hate Soros, and they hate Obama. They also think Paul is a nut. So if Soros is agreeing with them, maybe they are wrong. If Obama does what Soros is pushing for he will be doing what Republicans said he should do, and, they know he will be wrong, because he is always wrong no matter what he does. So that would mean they were wrong. But if they agree with Paul they will be agreeing with an nut, and they will have to admit they were wrong in the past.

Dat’s ‘cus Ron wrote it all his-self.

If there was no government, Soros could sell weapons to the guy himself.

… and I’m betting Soros could find a workaround to hid those activities, too.

“… In other words, despite the February ceasefire, Soros is pushing behind the scenes to make sure Ukraine receives top-of-the-line lethal weapons from the United States. Of course it will be up to us to pay the bill because Ukraine is broke. …”

Well, if that don’t burn your biscuits … And here all along we thought Soros was manipulating the “progressive” Fascists’ Helot press. It appears from this “Snowden-esk” discovery that Georgie also wants a Soviet Block country he can call his own … and he wants us taxpayers to buy it for him.

On the brighter side of Soros: the EU bank-cops have raided the Deutzbank (German central bank) in Frankfurt TODAY … and the Greek banks are seizing citizens’ savings (last week and this) … and the Brits are leaving the EU (since the Brit elections) … and … and … The Supremes are going to put the kibosh on BummerCare … and the demos are trying to kill OBomberTrade …

These are fat times for George … so many markets going to hell and He is making hay while the Sun shines!