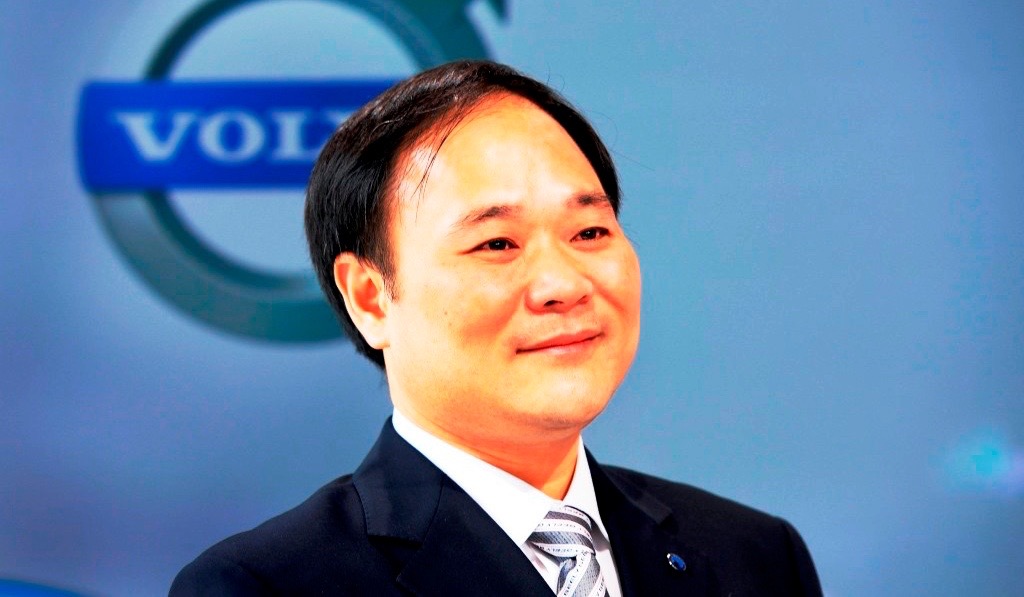 || By FITSNEWS || Meet Li Shufu.  He’s a businessman from China with a net worth of $3.3 billion. His company – Chinese carmaker Zhejiang Geely Holding Group – bought Volvo for a song back in 2010.  The Swedish carmaker was purchased from Ford, which was in the throes of the Great Recession at the time – and desperate for cash.

Ford’s loss was Shufu’s gain: His company paid $1.8 billion for an asset the U.S. automaker spent $6.4 billion on more than a decade earlier.

How much money does he want?  It’s not immediately clear, although Palmetto State taxpayers have shelled out more than $1 billion in economic development incentives to aircraft manufacturer Boeing.

Anyway, based on the latest data Shufu’s net worth is equal to the median annual income of 74,723 South Carolina families.

Crazy, huh?  Of course every single one of those families – and tens of thousands of other families just like them – will be on the hook for South Carolina’s crony capitalist handout to Shufu.

And sure … Shufu’s plant may create 4,000 jobs (God only knows how many of which will have to be imported due to our dumb-as-dirt workforce).  And it may have an economic impact of eleventy kabillion dollars or whatever magical figure the crony capitalists pull out of their yin yangs.

South Carolina has been doing this for decades – yet all we have to show for it is one of the nation’s smallest, dumbest and poorest workforces.

Isn’t it time … past time, actually … to try something different?

Look: We have nothing against Shufu.  Or Volvo.  We want them to come to the Palmetto State and create lots of jobs.  Our beef?  When a guy with $3.3 billion asks tens of thousands of people who are struggling to get by to chip in with the cost of building his plant.

And when the politicians who trip over themselves to hand him the cash – your cash – take credit for “creating jobs.”

They did nothing, people.  Nothing but stroke a check to a billionaire … from your account.

Of course South Carolinians don’t get that because their legacy media outlets are in the tank for the recipients of the largesse.  Which means our fourth estate is every bit as complicit in the “dumbing down” of our citizens as the government-run schools they also shill for.

“…Meet Li Shufu. He’s a businessman from China with a net worth of $3.3 billion…”

China is not a Communist country any more. It is thinly veiled Oligarchy. Just like Russia, and like the US will soon become if we don’t do something about the rapidly expanding disparity between the Mega-wealthy and everyone else.

Ah so!!! Ancient Chinese secret – you build, we buy.

You work for me now, Cracker!

The last Communist died long ago–now they are something 10X worse–Totalitarian Capitalists.

Uh-huh. The last idiot certainly has not died.

“…They did nothing, people. Nothing but stroke a check to a billionaire … from your account…”

So let me get this straight, are we actually writing them a check or giving them tax credits?

In the words of the great Monty Python –

I like Chinese, I like Chinese
They only come up to your knees
Yet they’re always friendly, and they’re ready to please

I like Chinese, I like Chinese
There’s nine hundred million of them in the world today
You’d better learn to like them, that’s what I say

I like Chinese food, the waiters never are rude
Think of the many things they’ve done to impress
There’s Maoism, Taoism, I Ching, and chess

Its typical Folks hyperbole. Based on his Goebbels training, repeat a lie enough times and people will think it is truth.

It’ll probably be as hard to unwind the mix of tax credits and actual taxpayer money as it is/was for Boeing.

It’ll be a mix if it happens just so everyone’s confused and can’t argue anything specific…it’ll be in Shifty/army speak “Charlie Foxtrot” all the way with the vagueness providing cover for scurrying cockroaches.

I don’t know if FITS has a point or not. I’ve read enough of his tripe to know who, and what, he is….FITS’ loathing for South Carolina and our people is so evident…I don’t trust anything he posts…

I don’t care if FITS or anyone in the world has a point or not – there I fixed it for you.

The investment in BMW has paid off in the Upcountry…maybe Volvo could do the same in the Lowcountry? You have to pay to play in todays world, so either pay or get left out.

Out of curiosity, how has BMW paid off? Isn’t Spartanburg usually named among the most undesirable places to live in the nation? I believe the roads in that area are also among the worst in the state. I suppose the company did create jobs, but I’m not sure what else is going on in that area.

News flash for dumb face. BMW is in Spartanburg County not the city of Spartanburg. In fact it is technically in Greer which sits on the Greenville/Spartanburg county line. AFTER you get your facts straight, come back with hard facts on locale desirability.

Yes it is. Still waiting for your hard facts on your allegations but as usual all I hear are crickets.

BMW is not in Greer. It does have a Greer address, but it is not located within the municipal boundaries of the City of Greer. The boundaries of the city limits of Greer are either in Greenville County or in Spartanburg County, not on the county line (of either). The entire Upstate is proud (as should all of SC) to claim BMW, it is huge economic engine and well worth every single penny taxpayers put in to the deal to get them here.

BMW may not be in the Greer City limits, but it is surrounded by areas that are. Kind of like GSP airport. So most say BMW is in Greer, like the airport.
Yeah, the county line runs right through Greer…about 2 blocks from my house. The city limits are so convoluted that most people don’t even know which parts are/are not in the city “officially”.

Why the women of the Charleston Urban League wear leather skirts? So they smell like a BMW.

Just the sheer number of people they employ, feeder companies that have come to the area, the inland port, etc. They pay well and a lot of people in the area are thriving because of them. Without the influence of BMW in the area, I don’t think we would have as much growth or general updates that we have had. A $12Billion impact to the economy of SC isn’t bad either…
The roads ARE becoming an issue, since the DOT can’t seem to do anything up here…seems they are only interested in the Lowcountry. Doesn’t help the inland port that trucks can’t hardly drive on the roads…

Trust me, low country roads are pretty damned low on their list. Gotta be near Charlotte and Lexington County so little Haley doesn’t get a sore butt driving home.

Thanks for the response on that. It has always struck me as ironic to see a leading car manufacturer in an area with terrible roads.

Me play joke. Me put pee pee in your coke.

With the 1st being tomorrow, Folks is busy “developing” his next government-run schools rant so he can get a voucher scam check to apply against his house mortgage.

My guess is Folks rents.

We need to tap Li Shufu to make a bailout donation to SCSU, they can rename the school to SCSUSHUFU U

A lot of ignorant comments posted as well as the article. Not one member of the Volvo board of Directors or Executive team is Chinese or Asian.

Jesus may have found red and yellow and black and white to be precious but we only like the last one around here – the more non-white persons that Fits features in the photographs the more clicks he gets and the more yelps from the usual suspects . . .

South Carolina has been doing this for decades – yet all we have to show for it is one of the nation’s smallest, dumbest and poorest workforces.

Facts:
South Carolina has hardly had any declines in it’s Labor force and in the last year is in one of the steepest increases ever in it’s history of record keeping.
South Carolina has had 64 consecutive months of job growth.
See the top two charts at the link. Change the start year a click “GO” to see earlier years.
http://data.bls.gov/timeseries/LASST450000000000005?data_tool=XGtable

You have been repeatedly warned to stop injecting facts. It screws up Folks’ agenda.

There has been little personal income growth, but growth none the less. The new jobs have been evenly distributed among all categories except construction. When the unemployment declines there will be upward pressure on salaries.

Either Volvo puts the plant here with the incentives we normally give, or just let Volvo go over to Georgia like every body else. I’m sure Haley can use some more kickbacks from Savannah like she did before, for her future Senate Campaign against place holder: Tim Scott.

Todd is unconvinced that these incentive boondoggles are a bad thing. Boeing is the best thing to happen to North Charleston since reconstruction. BMW is probably responsible for the growth Greenville and Spartanburg have experienced for the last 2 decades. Huge manufacturing concerns bring hundreds of other businesses to town to service them.
Dont just decry these moves as “too expensive” if you are not prepared to present some numbers.

Perhaps you are more comfortable with full title: “The Todd”

SC may have Shufu for aquatic launch, but will be hungry, again, too soon.

“our dumb as dirt workforce”..lulz.

Says the guy who has never had a job that produces anything.

You no come back here anymore