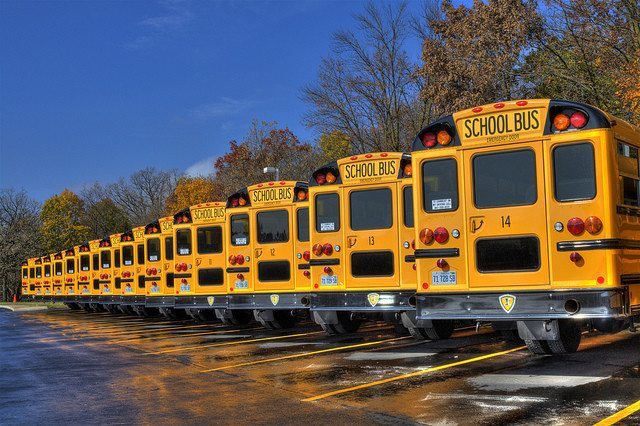 WHERE ARE THEY?  AND WHERE SHOULD THEY GO?

By FITSNEWS  ||  When gas prices are on the rise, South Carolina’s worst-in-the-nation government-run school system whines incessantly about the need for millions of dollars in new money to keep fueling its school bus fleet.   These shrill cries are mindlessly regurgitated by the Palmetto State’s liberal mainstream media, who lead us to believe that without immediate infusions of cash – the school bus fleet (and all government-owned vehicles) will grind to a halt.

Bear in mind South Carolina is the only state in America which owns and operates its own school bus fleet – a job it does every bit as ineffectively and inefficiently as the job it does “educating” our children.

Anyway, now that gas prices are in a free fall in South Carolina, we’re curious: Where are the mainstream media news reports about fuel cost savings?

And more to the point: Why isn’t that money going into a taxpayer rebate fund?

Oh … right.  Despite the best efforts of pro-free market lawmakers like S.C. Sen. Tom Davis, our state doesn’t have a taxpayer rebate fund.  It just takes the money that ought to be going back to you and spends it on crap like this.

They said it would only cover their “added costs” for six months.

In fact, the educrat establishment has consistently used the threat of rising fuel costs as a reason to opposing privatizing the state’s school bus fleet – propaganda swallowed hook, line and sinker by the state’s liberal legacy media.  More broadly, they’ve also used the “transportation” issue as a reason to oppose parental choice in South Carolina.

Well let’s look at their “transportation” for a moment, shall we?

A whopping 3,100 school buses in South Carolina (sixty percent of the fleet) are fifteen years or older.  More than 1,100 of those buses are more than twenty years old and roughly a hundred of them are more than 25 years old.  That means they are horribly inefficient from a fuel standpoint, environmentally unfriendly and tremendously costly to maintain – which is why the average maintenance cost on a South Carolina school bus is roughly $12,000, according to the S.C. Department of Education (SDE).

Not surprisingly old buses are less safe, too.  According to the S.C. Department of Public Safety (SCDPS), the number of collisions involving South Carolina school buses climbed from 292 three years ago to 402 last year.  Meanwhile the number of injuries associated with those collisions climbed from 144 to 322 over the same time period.

Those are huge increases, people.

Not surprisingly, the S.C. General Assembly’s solution to all of these problems has been to throw more money at the problem.  But it’s never enough.

“The Legislature is simply shirking its responsibility to maintain a bus fleet that is safe and efficient,” an editorial in The (Charleston, S.C.) Post and Courier recently noted.

The Post and Courier‘s solution?  Blow nearly $300 million on new buses or “find a fair way to privatize (the system).”

Here’s a better idea: Don’t stop at privatizing the buses.  Give each child a voucher for what the state spends on his or her education (transportation included) and watch as decades of failed central planning gives way to the kind of success and accountability that can only come from a free, competitive marketplace.

At the very least, South Carolina should use every penny of school bus fuel savings this budget year to expand the cap on its successful special needs choice program.