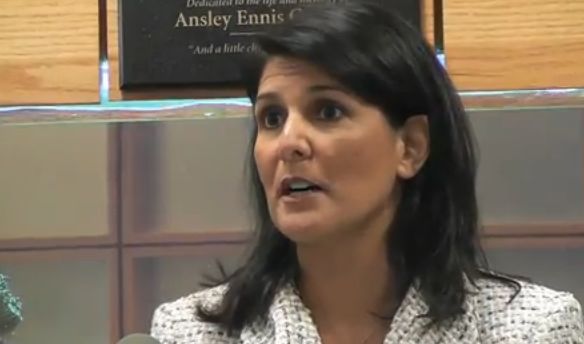 GOVERNOR: DEMOCRATIC NOMINEE’S LAUGHTER AFTER GAFFE WAS “KICK IN THE GUT”

By FITSNEWS || S.C. Gov. Nikki Haley issued her first public statements this week in response to her Democratic opponent (inadvertently?) calling her a “whore.”

Missed that?  FITS was the first South Carolina media outlet to report on the gaffe by S.C. Sen. Vincent Sheheen – which has since erupted into a major story (and a major problem for Sheheen’s already flagging candidacy).

“I haven’t spent a lot of time on this and you have not heard me talk about it and it’s because whether it was a gaffe or not, I really don’t care,” Haley said during a news conference this week. “I’m a tough girl, I can handle that. The laughing afterwards (though), was a kick in the gut. The comment that sometimes you’ve gotta tell the truth, that was tough. But, having said that, I’m not going to waste my time on that.”

Interesting … Haley focused on precisely the same two things we did related to this gaffe, which Sheheen has tried (unsuccessfully, we might add) to address.

“I thought that Ann Romney’s comments were appropriate,” Haley added, referring to statements made earlier this week by the wife of former GOP presidential nominee Mitt Romney.

“We’re going to win this race because we want it more,” Sheheen said at a Democratic rally last week. “We want it more and all we have to do is remind the people of South Carolina about the junk that has gone on the last four years. Remind them that we have a governor who has vetoed over $100 million in public education funding.  She vetoed our public school teacher’s pay raises the same year she gave her own staff 25 percent pay increases.”

Really?  Last time we checked Haley was every bit as enslaved to South Carolina’s failed government run education system as Sheheen.  Also, last year she vetoed less than one-tenth of one percent of the state budget.

“That is the worst kind of politics,” Sheheen continued. “And we are gonna escort whore out the door.”

Sheheen quickly caught his slip, and restated “escort her out the door.”

Of course both the candidate and his audience proceeded to laugh heartily over the comment for several moments after the fact … with one member of the crowd thanking Sheheen for telling the truth about Haley, who has been accused of having multiple affairs.

“You gotta tell the truth!” he responded.

“Sometimes when you’re speaking five to ten times a day, your words get a little bit garbled,” Sheheen told Charleston, S.C. radio host Bryan Crabtree earlier this week. “Uh. When they get garbled, and it does happen to me – I go back and say exactly what I meant, and you heard in that clip that I meant ‘her’ – h.e.r.”

“I can promise you I don’t use that word, the word that you people are claiming that I used,” Sheheen continued. “I don’t use it in private, I don’t use it in public — but if anybody heard wrong, and certainly my words were garbled, then you know I apologize. Because I don’t want to send that message to anybody.”