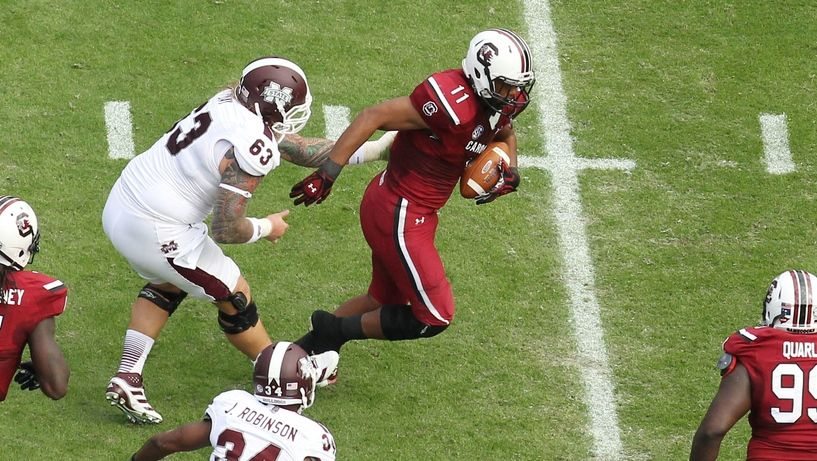 In the week leading up to the University of South Carolina football team’s season opening loss to then-No. 21 Texas A&M, Gamecock defensive coordinator Lorenzo Ward was featured prominently in the program’s news releases.

This week?  Ward is nowhere to be found.

Instead the Gamecock program is focusing on the players who suffered through the record-setting rout – in which the Aggies’ offense rang up 680 yards and 52 points.

Speaking on behalf of the defense this week?  Redshirt sophomore linebacker T.J. Holloman.

“We’ve just been trying to become better tacklers, fly around, have more fun,” Holloman said after Tuesday’s practice. “Last week we didn’t have much fun out there. We’re just trying to relax and fly around.”

Holloman acknowledged that East Carolina – the Gamecocks’ next opponent – runs a similar offense to the one that shredded South Carolina’s defense last Thursday.

“It’s very similar,” Holloman said.  “They do a lot of spread-out. They dink and dunk a lot. They try to get the ball in as many people’s hands as they can. They like to pass the ball. They’re more pass than run. When they run, it’s more like a zone scheme.”

So … how will the Gamecocks answer that attack in the wake of last week’s bloodletting?

“We’ve been running around in practice. All the drills have been fast,” said Holloman. “We’re out there competing and going as fast as we can to try to simulate the game.”

Holloman added that the Gamecocks have been working hard trying to find ways to generate a pass rush.  USC recorded just one sack and only three quarterback pressures against the Aggies – enabling first-time starter Kenny Hill to pick apart an inexperienced Gamecock secondary.

@fitsnews I sure hope so… Can't get much worse than last Thursday.