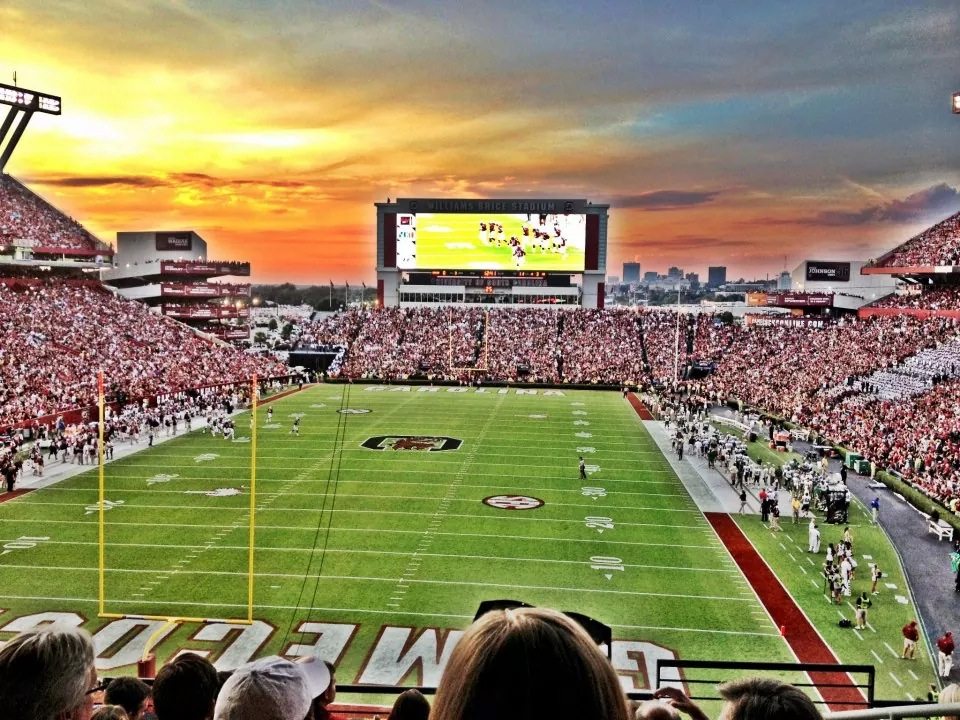 By Liz Gunn || I knew immediately upon taking on this “FITS thing” that I eventually wanted to write about college football.  I plan my life around seven, specific Saturdays every fall. Some might call it an obsession, but for me and millions of others across the country it’s simply a way of life.

And nowhere is that way of life more ingrained than at the University of South Carolina.

It’s not just about the game. It’s the complete experience. For me it’s “2001” and “Black Magic,” always taking me back to that first game I went to as a child. It’s 85,000 people yelling “GAME” and “COCKS” back and forth across the stadium in perfect succession. It’s boiled peanuts and the smell of burnt popcorn. It’s tailgating and fashionable ensembles that people outside the South consider too dressy for a ballgame.

These days it’s also bouncing to “Sandstorm” and head coach Steve Spurrier coming on the Jumbotron to tell us “It’s time for Carolina football!”

I could not be more ready for next week’s kickoff!

This year marks the seventh consecutive year that South Carolina will open on a Thursday night, meaning our game against Texas A&M will be one of the first college football games America gets to see. And while Thursday nights aren’t exactly convenient for people who work 9-5, you make football a priority – am I right?

The level of productivity in this city and other parts of the state will sink to an all-time low this time next week.  And unless your boss is a communist, he or she should be okay with that.

Opening day feels like Christmas to me. I can’t sleep the night before, thanks to a mixture of extreme excitement and extreme anxiety. When I do get to sleep, I dream about football – about losing, or one of our starters getting hurt. It’s a sickness, I tell ya!

I wake up at the crack of dawn, even for a night game, and I am all business until our car is in its tailgate spot.

Over the last thirty years, I have definitely seen firsthand the best of times and the worst of times for Gamecock football. In good times and bad, it never loses its appeal. I once wrote that the Gamecocks made me feel like a battered housewife. No matter how much they break my heart, I always come back for more.

I have learned over time to lower my expectations at the beginning of the season to limit disappointment. Has a more Gamecock-y statement ever been written? This year that is going to be really hard to do after having gotten some inside scoop on what to expect.

Our best receiver goes to the draft and NOW we have the best offense we’ve ever had?

This I’ve got to see!

I would be lying if I said I didn’t often envy teams with explosive offenses, while we are usually relegated to lie in wait with our stout defense, ready to shut them down. But you know what they say – offense sells tickets, defense wins games. A nice combination of the two would be welcomed this year.

If you’ve been a Gamecock fan long enough then you know we have traditionally struggled with our lines – both offensive and defensive. It’s not easy for skill players to make big plays when the line doesn’t give them that opportunity. Well not this year. My source says in addition to an outstanding offense, our O-line and D-line are solid.

Football games really are won or lost at the line of scrimmage – and it sounds like we are putting ourselves in position to win those key battles this year.

Let’s take a look at the schedule. I rarely make bold predictions about my own team, especially before we have even played a single down, but it looks like we have a realistic shot at being undefeated at the end of regular season play, which means we have a realistic shot at a conference title game as well as spot in the inaugural college football playoffs.  I’m not saying getting there will be easy, but it certainly can be done.

I think we’ll at least scrape by Georgia at home, although I would love nothing more than a brutal beat down after last year’s choke job in Athens.  Vandy and Auburn on the road stand out to me as games to be the most nervous about.  Unranked Florida is a big question mark, and unfortunately we do play them in “The Swamp” this year – and the last time we went into the Swamp with high hopes, it got out of hand quickly.

Of course playing Clemson in Death Valley is just the worst … not that it’s mattered in recent years.

It’s never a cake walk playing in the SEC, but our other conference games shouldn’t give us any trouble.  Of course this is Gamecock football, so we’ll all have to hold our breath as we wait and see.

One week from today our city comes to life!  Say what you will about Columbia, but come August 28th there is nowhere on earth I’d rather be than Williams-Brice Stadium.