University of South Carolina defensive end Jadeveon Clowney – who finished sixth in the 2012 Heisman Trophy voting – said he was going to start his 2013 campaign at this year’s Outback Bowl in Tampa, Florida.

For three-and-a-half quarters, Clowney’s campaign wasn’t looking so hot.  The 6-foot-6, 260-pound All American from Rock Hill, S.C. was pretty much held in check by All-Big 10 left tackle Taylor Lewan, a projected top five NFL draft pick.  Not only that he was flagged for a pair of offside penalties. 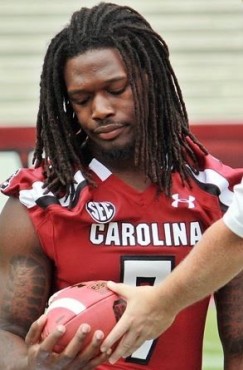 Midway through the fourth quarter, though, Clowney got angry – and with good reason.  On a fourth-and-four play from its own 37-yard line, Michigan gave the ball to safety Floyd Simmons’ on a fake punt.  USC’s defense clearly stopped Simmons behind the first down line, but the Wolverines received an exceedingly generous spot from the Big East officiating crew.  Even with this generous spot, though, the tip of the football came about an inch shy of the first down marker after the officials called for a measurement.

Astoundingly, a first down for Michigan was signaled regardless – sending USC head coach Steve Spurrier and the rest of the Gamecock sideline into a rage.

Spurrier challenged the spot of the ball, but the ruling on the field was “upheld” – which was even more bizarre considering the officials’ spot (a.k.a. the “ruling on the field”) appeared to indicate that Michigan had come an inch shy of converting its fake punt.  No explanation was provided by the officiating crew for this inconsistency either – they just gave Michigan the ball.

On the very next play from scrimmage Clowney emphatically reclaimed what had been unjustly taken from the Gamecocks – delivering what many are already referring to as the hit of the season on Michigan running back Vincent Smith.

Firing through the Wolverine offensive line, Clowney exploded into Smith a full six yards in the backfield – sending his helmet flying through the air and Smith’s body slamming into the turf at Raymond James Stadium.

And not only did Clowney level Smith, he had the presence of mind to make an equally impressive one-handed recovery of the fumble caused by his bone-rattling “de-cleater.”  In fact Clowney was struggling to his feet in an effort to return the fumble for a touchdown when he was run into by one of his own teammates.

“I was trying to score a touchdown,” he said after the game.

Here’s a closer frame-by-frame look at “The Hit …”

And here’s the full-speed video …

UPDATE: For those of you who love “X’s” and “O’s,” here’s neat description of “The Hit” from Sports Illustrated’s Andy Staples …