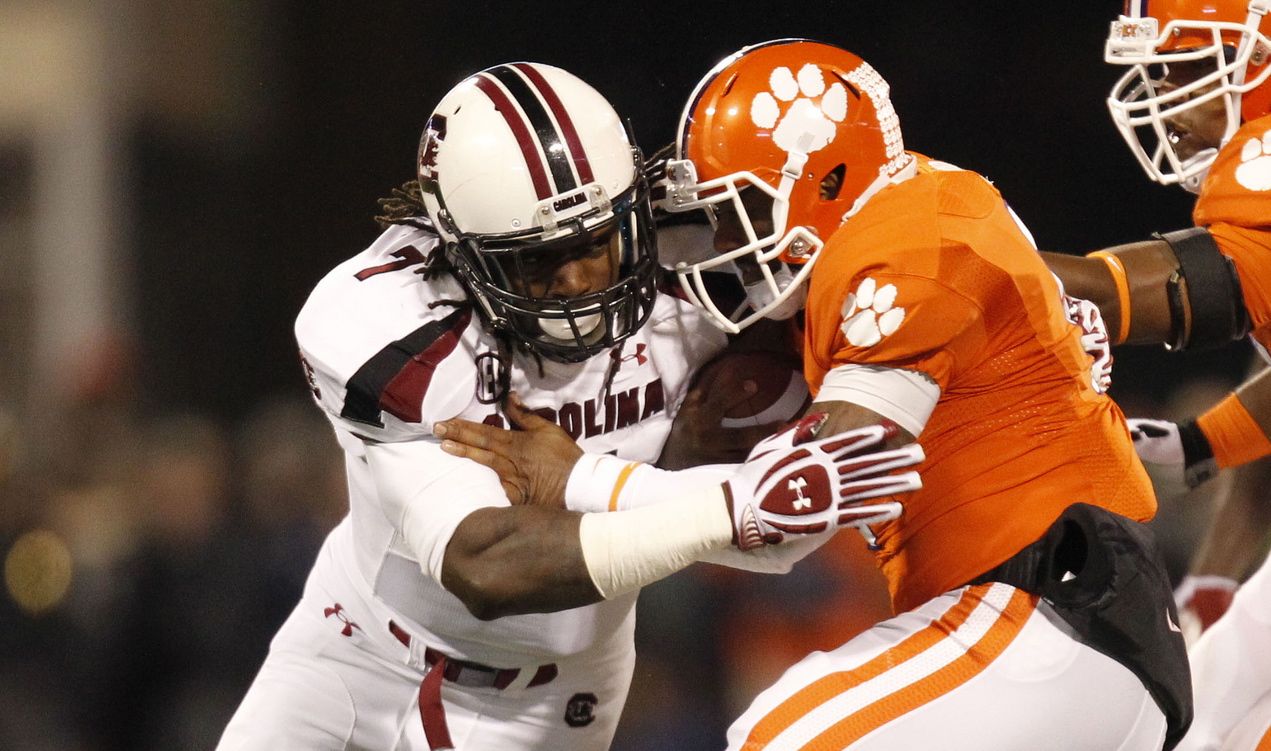 Thanks to a clutch performance from backup quarterback Dylan Thompson – and four-and-a-half sacks from standout defensive lineman Jadeveon Clowney – the University of South Carolina football team took its fourth game in a row over arch rival Clemson.  In the process the No. 12 Gamecocks made Steve Spurrier the winningest coach in school history – with 65 career victories over his eight years in Columbia, S.C. (including a remarkable 30 wins in his last three seasons).

“We were very fortunate … again,” Spurrier said after the game.  “Seems like when we play Clemson they don’t play very well, and we played well enough to make a few more plays than they did.”

South Carolina’s 27-17 win was part of a banner day for the powerful Southeastern Conference – which went 4-0 against the Atlantic Coast Conference on “Rivalry Saturday.”  In addition to the Gamecocks’ win, No. 4 Florida defeated No. 10 Florida State 37-26 while No. 3 Georgia demolished unranked Georgia Tech 42-10.  And in a battle of conference bottom feeders, Vanderbilt pummeled Wake Forest 55-21.

Can anybody say “Anybody Can Compete?”

USC’s win also gives them double-digit victories in back-to-back years for the first time ever – truly uncharted territory for a program that literally defined mediocrity up until about three seasons ago. 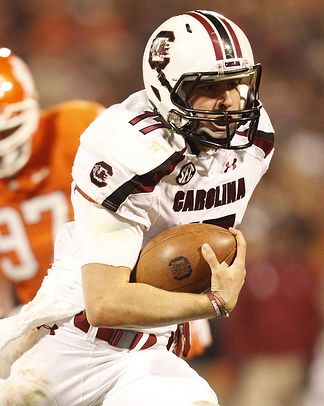 Dylan Thompson looks for room to run against Clemson.

South Carolina won for the third time in a row this year without star running back Marcus Lattimore – who is out until 2014 after suffering a serious knee injury against Tennessee last month.  The Gamecocks also won without the services of starting quarterback Connor Shaw, who re-injured his foot in last week’s win over Wofford.

How’d the Gamecocks manage that?  By shutting down a Tiger offense that had amassed an astounding 205 points and 2,442 yards in its last four games – an offense which came out of the gates looking like it was going to put up similar numbers against one of the top defensive units in the nation.

No. 11 Clemson racked up 163 yards and 14 points during the first quarter – and looked as though it was well on its way to sprinting past South Carolina.  But the Gamecock defense collectively stiffened, surrendering only 3 points and 185 yards during the game’s final three quarters.

In fact defensive coordinator Lorenzo Ward’s unit held Tiger quarterback Tajh Boyd under 200 yards passing for only the third time in his career – and limited superstar wide receiver Sammy Watkins to just four catches for 37 yards.  Boyd – whose Heisman Trophy stock was soaring after his 466-yard, 8-touchdown performance against N.C. State – was held to 183 yards passing with only one touchdown and two interceptions.

“I’m really, really proud of our defense,” Spurrier said.  “That’s one of the best offenses in the country and we held them down pretty well.”

Of course Boyd, Watkins and Co. were on the field for less than seven minutes in the second half – as the Gamecocks were able to consistently maintain possession of the football thanks to a workmanlike performance from Thompson and several clutch conversions on long third down plays.

The redshirt sophomore from Boiling Springs, S.C. completed 23 of 41 passes for 310 yards and three touchdowns in his second career start – looking much sharper than he did during his last extended action (in last month’s road loss to No. 4 Florida).  Thompson’s favorite target?  Sophomore Bruce Ellington, who caught seven passes for 72 yards and a pair of touchdowns.  Junior wideout Ace Sanders caught six passes for a career-high 119 yards and a touchdown. 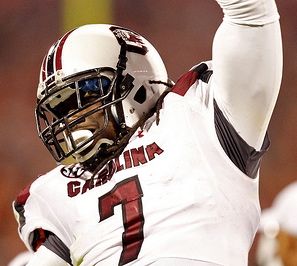 Thompson also showed surprising speed and mobility – including a 20-yard scamper on a third-and-nineteen play late in the fourth quarter that set up his game-clinching touchdown pass to Ellington.

“We couldn’t disrupt him,” Clemson head coach Dabo Swinney said of Thompson.  “He threw the ball incredibly well.  He was the difference in the game.”

South Carolina was able to maintain possession by converting on third down plays.  USC converted 11 of 21 third downs against the Tigers – better than 50 percent.  Entering the game, Clemson’s defense was limiting opponents to a 33 percent third-down conversion rate.

As a result, USC enjoyed a commanding 2-to-1 time of possession advantage in the game – although Spurrier’s squad did its best to keep the Tigers in the game by committing 11 penalties for a total of 110 yards.

“We made a lot of mistakes,” he said.

Fortunately a dominating performance by Clowney and the rest of the Gamecock defense bailed them out.  In addition to his 4.5 sacks (giving him a school record 13 on the year), Clowney also forced one of Boyd’s two interceptions with a monster pass rush right up the gut of the Clemson defense.

“We couldn’t get the ball in the third period,” said Swinney. “We just couldn’t stop them on third down. The third quarter was huge. We had too many penalties, too many turnovers and South Carolina did a great job of controlling the ball.”

After winning his first game against USC in 2008, Swinney has now lost four in a row.

“I just want to apologize to our fan base, to our seniors, to everyone,” he said.  “I really appreciate the environment that these fans have created these past few seasons. This loss really hurts.”