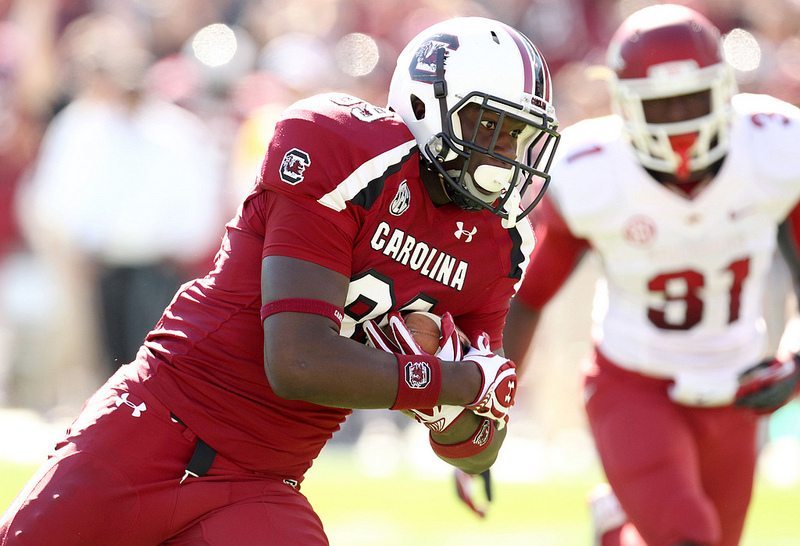 COLUMBIA, S.C. – The South Carolina Gamecocks and Texas A&M Aggies will open the 2014 season with a special Thursday night contest at Williams-Brice Stadium in Columbia, highlighting next year’s football schedule, it was announced today.

The Gamecocks and Aggies will meet on the gridiron for the first time ever on August 28, 2014. That Southeastern Conference battle will also be the debut game for the new SEC Network. The season-opening contest is also the first of a three-game homestand for the Gamecocks.

South Carolina and East Carolina will renew its rivalry on Saturday, September 6. South Carolina has won each of the last two games between the two schools, including a 48-10 win in Columbia last season, and holds a 12-5 lead in the all-time series.

An early SEC Eastern Division showdown is on tap in week three, as the Georgia Bulldogs will make their way to Columbia on September 13. Georgia leads the all-time series 48-17-2, but Carolina has won the last three meetings, its longest winning streak in the series that dates back to 1894.

The Gamecocks will go on the road for the first time on September 20 when they venture to Nashville for another SEC Eastern Division contest against Vanderbilt. South Carolina holds a commanding 18-4 lead in the all-time series, including four straight wins over the Commodores.

The Missouri Tigers will make their second trip to Columbia, S.C. when they visit Williams-Brice Stadium on Saturday, September 27. The Tigers won the first two games between the two squads, both in bowl games, before Carolina handed Mizzou a 31-10 drubbing last year in the Tigers’ first season as a member of the SEC.

The Gamecocks will play their fourth-straight game against an SEC Eastern Division rival the following week when they travel to Lexington to face the Kentucky Wildcats on October 4. South Carolina has won 12 of the last 13 meetings between the two squads to run out to a 16-7-1 advantage in the all-time series.

After enjoying the first of its two scheduled off weeks during the 2014 season, South Carolina returns to action on Saturday, October 18 when it hosts in-state FCS foe Furman. USC holds a 27-20-1 lead in the all-time series against the Paladins, one that dates back to 1892. South Carolina won the last meeting in 2010 and has won 12 of the last 13 times the teams have met on the gridiron.

The Gamecocks will play their one road tilt against an SEC Western Division opponent on October 25 when they travel to the Plains to take on the Auburn Tigers. South Carolina historically has struggled with Auburn, posting a 1-9-1 record in 11 contests. The Tigers have handed the Gamecocks three of their nine losses over the past three seasons.

The Gamecocks’ final SEC home game of the 2014 season will take place Saturday, November 1, when Carolina hosts Tennessee at Williams-Brice Stadium. The Gamecocks have won each of the last three meetings with the Volunteers, the longest winning streak in school history, but still trail the all-time count 22-7-2.

The Gamecocks will take the November 8 weekend off before wrapping up the SEC slate with a November 15 date in the Swamp against the Florida Gators. Carolina has won two of the last three meetings, but Florida holds a 24-6-3 all-time lead.

Carolina will wrap up its 2014 regular season slate with a pair of non-conference tilts. The Gamecocks will host South Alabama on November 22 in the final home game of the season. That Senior Day meeting will be the first ever between the two squads.

The 2014 regular season concludes on Saturday, November 29, when Carolina travels to Clemson for the annual Palmetto State showdown. The Gamecocks have won each of the last four meetings between the two squads.

The Florida game will be for the SEC East title.

How does the NCAA determine who opens the season? It appears that USC has had the first game of the season for the past several seasons and will next year… how does one school get the first game every year?

Not a dirt pecker, not a tater… just an FYI.

Thanks .There is gonna be a LOT of action ,this coming fall,although the Missouri game is gonna keep me real busy on the ‘traveler’s section’ of SD…

If you get bored with the wife,you’re welcome at one our hotel parties;before,during or after the games,but don’t go running your mouth about it,baby boy!