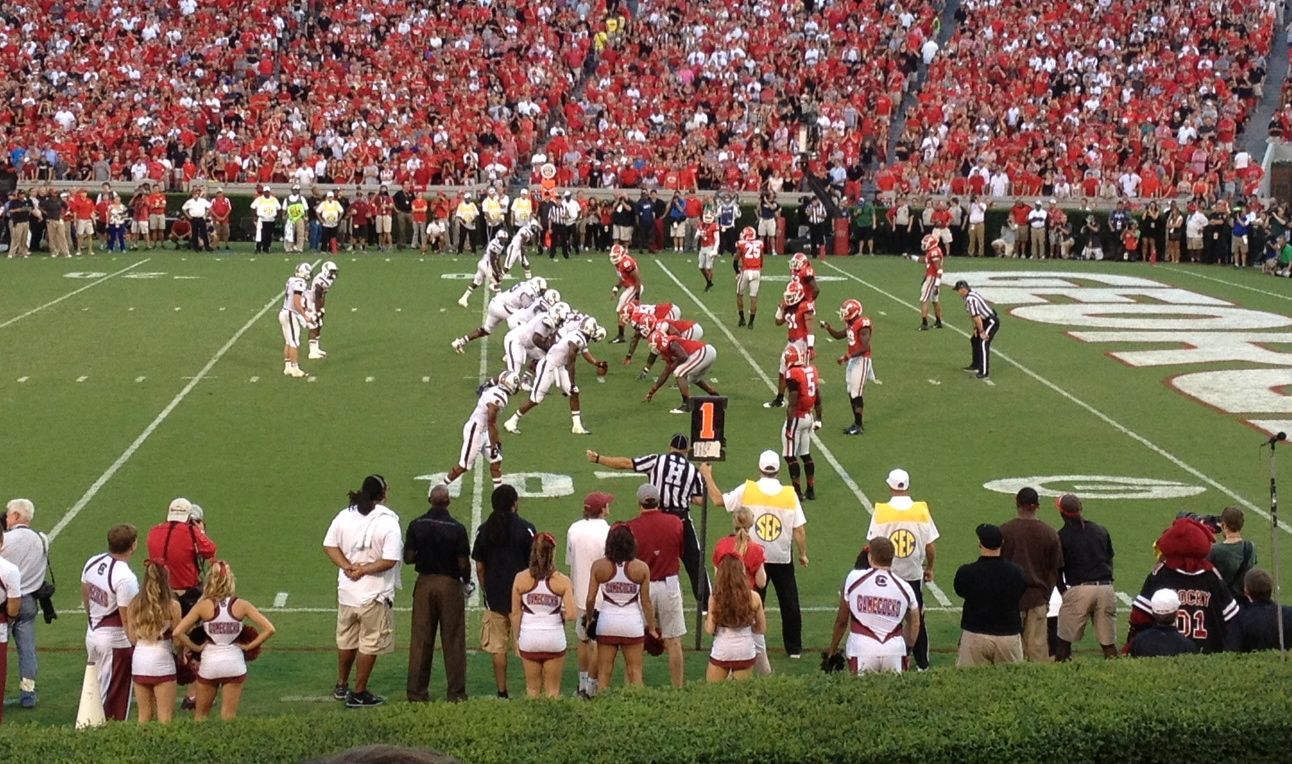 “Do you want to go on a ‘guys trip’ to the Georgia game on Saturday?” he asked me. “I’ve got everything covered.”

“Everything” was no joke either. Lined up were tickets, tailgating and transportation to and from the game on a private plane. Had I been a drinker, there were also plenty of “ko-beers” and “licka-dranks” available – on the plane, at the tailgate and in the stadium (they make these “shot” packets now – whiskey where ketchup used to go – who knew?).

Anyway, I asked my wife – the lovely Mrs. Sic Willie – if it was okay for me to go. Which was another way of saying “I know you’re six-and-a-half months pregnant, but … do you mind if I leave you alone with our three cracked out kids (including one exceedingly cracked out toddler) while I go watch a football game?”

After I assured her a professional pilot would be at the controls of the plane (and after she assured me that my testicles would remain in their undisclosed location in the Midlands region of the Palmetto State for the duration of the trip), a one-day hall pass was granted.

And so on a picture perfect September morning, I hopped on a plane of mostly strangers and headed west …

Visibility on the flight was perfect … we could see all sorts of landmarks below. In fact as we flew over the Savannah River a few jokes were made at S.C. Gov. Nikki Haley’s expense.

On the plane I befriended an older gentleman – an attorney from the Pee Dee region of the state. He was a bit surprised I didn’t drink alcohol, but after assuring him that I’d been a raging alcoholic for more years than I’d been sober – he decided I was okay.

And yes, on this trip I was “that FITS News guy” to most of the people I met – which I quickly discovered was either a very good or very bad thing.

On the plane, thankfully, it was all good … because getting tossed from that elevation would have hurt. A lot.

After arriving in Athens – as our traveling party made its way into town on an airport shuttle bus – my new Pee Dee friend offered me some unsolicited advice. It came shortly after we had traded cell phone pictures of our wives (PG, at this point) and our children.

His four kids – one of whom we would tailgate with moments later – were “all grown up.” His daughters? Smoking hot. He told me he hadn’t always been the best dad – mostly because he was a workaholic (something I struggle with myself). He also remarked that much of the time he spent with them had been rushed.

“Parents hurry their kids because they’re busy,” he told me. “They hurry them through dinner, hurry them to bed, hurry them when they wake up in the morning.”

He then told me he believed it was God’s will we wound up in the back seat of a shuttle bus at that very moment so he could impart to me the importance of not rushing your kids through life … of taking time with them.

You know, wisdom is a hard thing to come by in life, and when you hear it – well, it’s “wise” to pay it some mind.

When our crew stepped off of the bus at the University of Georgia’s famed arch, it was clear we were setting foot into what Maverick from Top Gun would have deemed a “target-rich environment.” Seriously, with the exception of The Grove at Ole Miss (and wherever Dianne Gallagher and her friends are tailgating in Knoxville), I’ve never seen such a high concentration of “visual relief.”

One thing I noticed: All the college girls are wearing boots now. Seriously … all of them. Most of them brown, leather boots with a one-to-two inch heel. The college girls look good in their boots, too. I wondered though, wouldn’t their feet get sweaty and stinky in those boots?

“Wouldn’t their feet get sweaty and stinky in those boots?” I asked one of my traveling companions.

“I don’t know but that’s the last place I’ll be going,” he said.

“Ha! Not a shrimper?” I asked him, at which point he gave me that puzzled sort of look people always give me whenever I invoke the lost art of shrimping.

The tailgate spread our guy put on was immaculate. There must have been more than 2,000 Chick-fil-A nuggets there … and I’m pretty sure every single one of them was gone in less than a half hour. I don’t remember exactly how many nuggets I put down, but it was probably more than enough to feel it at the gym this week. Having a good sturdy toothpick helped. Also, not knowing hardly anyone at the tailgate allowed me to spearfish for the plumpest, juiciest nuggets while everybody else conversed.

A loner nugget fiend, I was. At least for a time. Eventually some dude noticed my technique and separated himself from the herd.

“Where’d you get that toothpick?” he asked me.

“You have to eat one of those sandwiches over there there to get one,” I told him. “The toothpicks are in the sandwiches.”

He promptly ate one of those sandwiches.

By far and away the star of our tailgate party was “the girl in the purple” (above). No one knew who she was, although I’m sure my attorneys will inform me of her identity the moment her richer-than-God husband sues me for running these pictures.

Amid an indistinguishable sea of red and black (and garnet and black) hotties with their “G’s” and “C’s” painted on their faces, “the girl in the purple” truly stood out. In fact she’s the reason for this post.

“You have got to put THAT on your website,” one of my fellow tailgaters announced, pointing directly at the curvacious central region of her bodacious buxomness.

Several others announced that the “girl in the purple” would be receiving their votes in “the FITS poll.” Not sure what poll they were referring to, but …

Several times I was challenged to find something … anything wrong with “the girl in the purple’s” body. I couldn’t. And believe me, it wasn’t for lack of trying.

So vote for her … or something …

The walk into Sanford Stadium was shoulder-to-shoulder crowded – and oppressively hot. Which of course made me think of all those brown leather boots the girls were wearing again, and whether it was making their feet stink. And our path to the gate was (for obvious reasons) full of Georgia fans. And when these Georgia fans weren’t shooting me and my friends dirty looks for having the audacity to wearing South Carolina hats in their presence, they were remarking amongst themselves that the walk into the stadium seemed more crowded than usual.

We soon figured out why …

The poor girl scanning tickets at the gate couldn’t get her scanner to work. Seriously I’ve never felt so bad for anybody in my life as I did for that poor girl – thousands of drunks yelling at her to “hurry the f*ck up!” or “make the damn thing work dammit.”

Overwhelmed, she finally started telling people “just go, just go.” As I passed her I seriously thought she was going to cry.

I don’t think she heard me at all …

The walk to the stadium was memorable for me, though, because as I moved within the hot, huddled mass I got the inside scoop on the University of South Carolina’s boiled peanut conspiracy. It’s a good scoop, people. But that’s another story for another time …

The game? Yeah … the game. South Carolina lost it, in case you missed it … in ugly fashion.

Which reminds me … Georgia fans are assholes. There’s just no other way to put it. On the way out of the stands following the thrashing the Bulldog offense laid down, the verbal pelting was positively caustic.

Sheesh … whatever happened to just saying “good game?” Or nothing at all? My friends and I had been warned on our way into the stadium to walk out of town quietly and politely if our team wound up winning, but the trash talk that rained down on us following this ignominious defeat was a bit startling.

On the long walk up the hill from the stadium it only got worse. One guy practically jumped off of an embankment and landed on the sidewalk a few feet away from me and one of my friends to deliver his declaration.

We get it, Georgia. Your team won. It had been awhile, we know …

Eventually we got back to the airport, at which point we ran into University of South Carolina president Harris Pastides (that’s his tan mug in the bottom right corner of that picture).

Dude was wearing those frat-tastic khaki pants with the team logos stitched all over them. Total cheese. He also hopped into a much nicer plane than anybody else at the airport, which was surprising given the private sector firepower amassed on that tarmac. How much did taxpayers shell out for that ride? I didn’t ask …

On the twenty-six minute flight back home the fellas downed more ko-beers and licka-dranks, while a bag of pizza-flavored Combos quickly became coveted fare. Mmmmmm. Combos.

At this point the cell phone picture trading turned less than PG … with one of the passengers invoking St. Peter and reminding us we were all still several thousand feet in the sky.

God was exceedingly, exceedingly forgiving, though, and we landed safely … at which point the crew dispersed. My Pee Dee friend headed off to Florence. Another traveler headed off to Newberry, S.C. Those of us from Columbia remarked how awesome it was that we’d be able to catch the second half of the Notre Dame-Michigan game.

I summed the trip up thusly on social media …

A fun Saturday in Athens.

Gamecock Coaches: This Explains A Lot

Don’t Mess With The Lioness

Targets acquired! Makes one wonder: How does Mrs. Sic put up with you? She must be one heckuva lady!

Georgia fans are assholes, huh? So sorry that you got a little taste of what I have experienced leaving Williams Brice over the last thirty years, win or lose. Pot, meet Kettle.

I used to live near the UGA stadium. Jerks would block my driveway the whole weekend and cover the lawn with Dixie cups. It made me hate the Bulldogs even more.

Yep, my spam filter is working ’cause the photo “of her bodacious buxomness.” is missing………….
Your writing is terrific on this article — you should give us more like this.

So apparently your testicles were not jarred as tightly as Mrs. Sic would have hoped. I’m sure she would be mad as hell if those pics were to somehow get loose.

“They just pounded us up front. No excuses,” Clowney said after the game. “They just really beat us up front, hands down. I give them their props.”