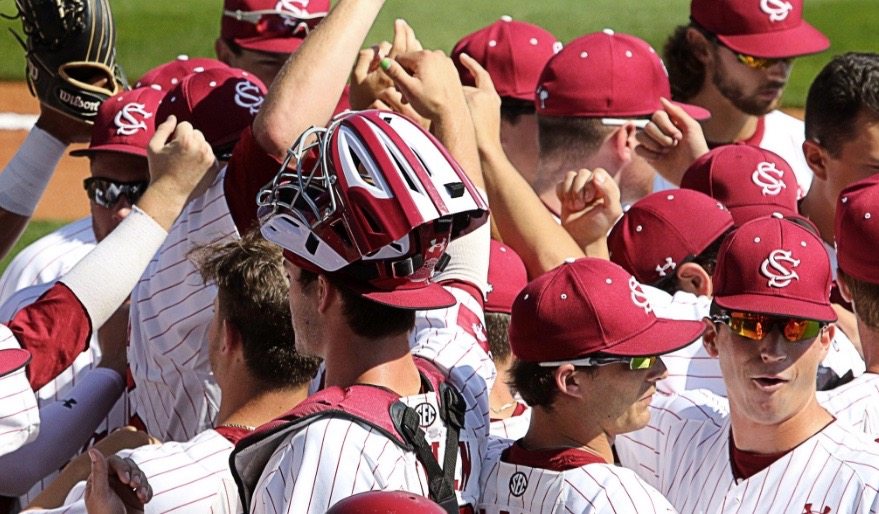 The University of South Carolina baseball team won four consecutive “do-or-die” elimination games to reach the NCAA Super Regional round for the first time since 2013.

It’s the twelfth time the program has advanced to the Super Regionals – but the first time it’s happened in such dramatic, come-from-behind fashion.  After getting bounced from the Southeastern Conference tournament and losing its opening game in the NCAA regional, the No. 14 Gamecocks were one loss away from their season being over.

In fact head coach Chad Holbrook‘s team – which seemed to have lost its confidence after a bounce-back regular season – needed to win four consecutive games in order to stay alive.

Guess what … they pulled it off.  In smashing form, too.

The Gamecocks (46-16) defeated the University of North Carolina Wilmington (UNCW) 10-5 in a weather-delayed tilt on Tuesday to complete the comeback – with sophomore first baseman Madison Stokes (bio) leading the charge offensively.  Stokes went 3-for-4 at the plate – scoring three runs and driving in three runs.

Senior DC Arendas (bio) contributed as well, blasting a home run and driving in a pair of runs.

Those runs were part of an offensive explosion that saw the Gamecocks plate 43 hitters over the final three games of their home regional.

South Carolina now hosts No. 24 Oklahoma State University (OSU) in a best-of-three series at Founders Park in Columbia, S.C.  The Cowboys defeated No. 9 Clemson in regional action last week, but were welcomed warmly by the Tigers in the aftermath of that tournament.

Clemson permitted OSU to use its weight room, batting cages and home field while it awaited the outcome of the Columbia regional – enabling the Cowboys to avoid losing practice time due to travel.

Our guess is Gamecock fans won’t be so pleased …

First pitch in the Oklahoma State-South Carolina series is scheduled for 2:00 p.m. EDT on Saturday.  The winner will advance to the College World Series in Omaha, Nebraska.

South Carolina hasn’t made it to the College World Series since 2012 – when it lost to Arizona in the final round.  In 2010 and 2011, the Gamecocks won national titles.