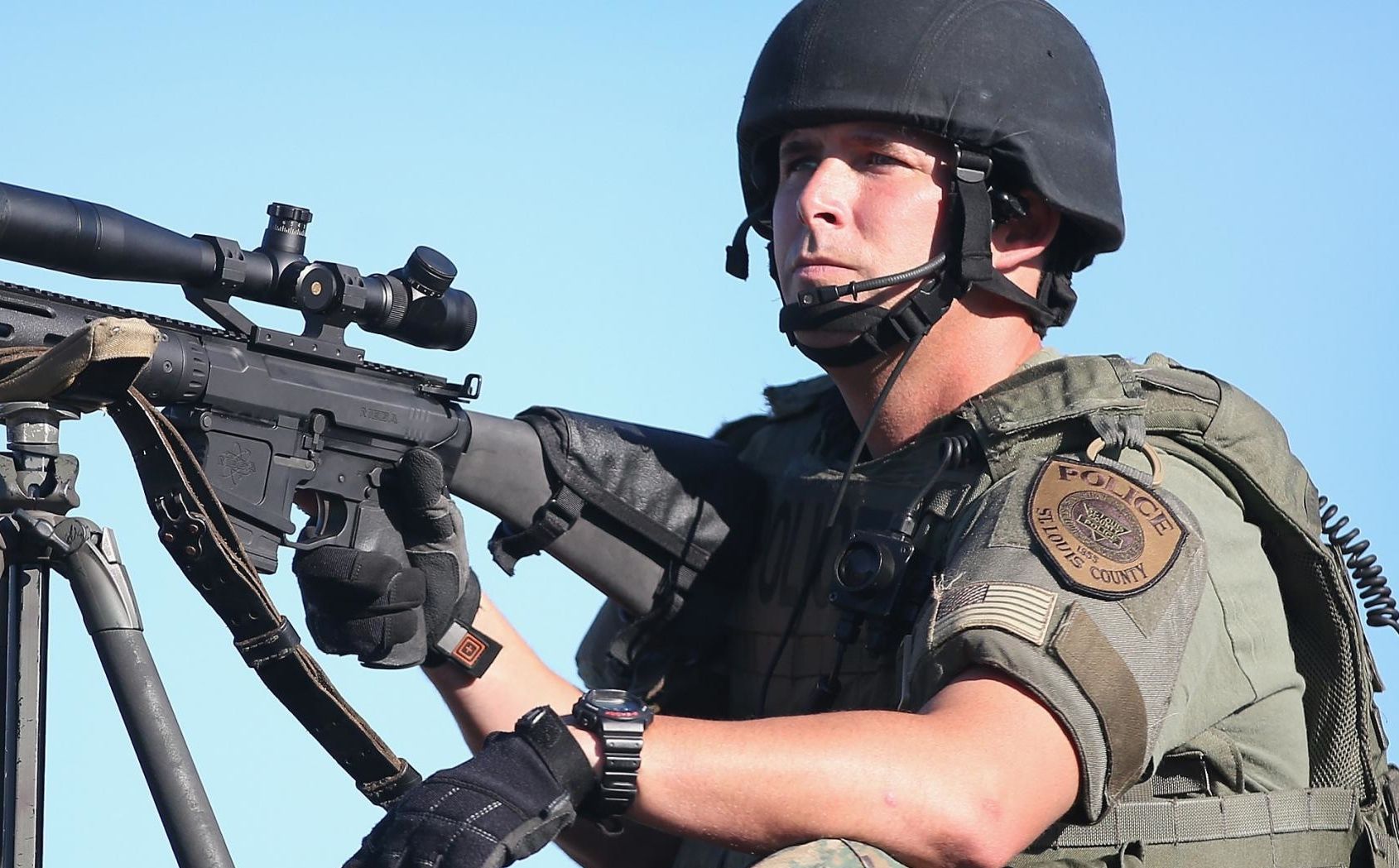 For a fifth straight night, the St. Louis suburb of Ferguson, Missouri resembled a third world country – with protesters clashing violently with militarized police units.  Molotov cocktails and other projectiles were lobbed at riot police, who have been accused of over-responding to the protests and violating the participants’ right to assemble.

That has, in turn, sparked a long-overdue debate over the excessive militarization of local law enforcement – which has been flooded with war equipment (432 mine-resistant armored vehicles, 435 armored trucks and cars, 533 aircraft, 45,000 night vision optical pieces, 94,000 machine guns, 180,000 magazines and an undisclosed number of drones).

The violence stems from the shooting of an unarmed 18-year-old black man – Michael Brown – by a local law enforcement officer.  Witnesses claim the shooting was unprovoked, while police say the officer involved was assaulted and sustained injuries during the attack.

Police have yet to release the name of the officer – or elaborate on their version of events.  An investigation overseen by the U.S. Department of Justice (USDOJ) is underway – although the story has morphed from the aftermath of the disputed incident to the police response.

According to libertarian-leaning author Michael Snyder, what’s happening in Ferguson is a sad preview of what’s to come in the rest of the country.

“Ferguson, Missouri is under military occupation right now,” Snyder wrote. “And the entire world is watching in horror as militarized police fire tear gas and rubber bullets at unarmed protesters.  Yes, the rioting and looting in Ferguson needed to be stopped. If order had not been restored, more stores and businesses would have been destroyed. However, there is no excuse for the brutal tactics now being employed.  At one point, police snipers were even using laser scopes to target protesters that were obviously unarmed.  Sadly, this is just a preview of what is coming to America in the years ahead.”

Snyder added that “as the economy falls apart and people become even more angry and even more frustrated, there will be a lot more incidents of civil unrest like we have just witnessed in Ferguson.  And in response, the federal government and our overly militarized police will seek to crush those uprisings with overwhelming force.”

And you wonder why governments everywhere are trying to take our guns?  And limit our ability to defend ourselves?

Additionally two reporters – Wesley Lowery of The Washington Post  and Ryan Reilly of The Huffington Post – were detained during their coverage of the riots.

“The worsening situation in Ferguson is deeply troubling, and does not represent who we are as Missourians or as Americans,” Missouri Gov. Jay Nixon said in a statement. “While we all respect the solemn responsibility of our law enforcement officers to protect the public, we must also safeguard the rights of Missourians to peaceably assemble and the rights of the press to report on matters of public concern.”

@fitsnews FINALLY. A conservative warning about our police state aborning. >:(

Related Topics:FergusonFerguson Riots
Up Next