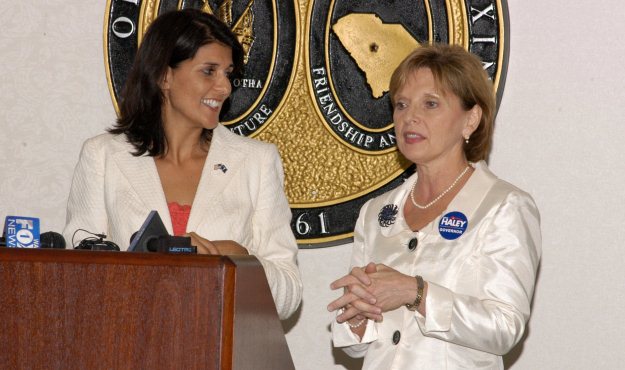 GOVERNOR LASHES OUT AT STATE SENATOR OVER EMBATTLED WELFARE CZARINA

A frustrated S.C. Gov. Nikki Haley launched a social media broadside against one of her longtime political allies this week – angry that the lawmaker in question joined other state Senators in challenging her embattled welfare director.

Haley blasted S.C. Sen. Katrina Shealy (R-Lexington) – accusing her of spreading rumors about S.C. Department of Social Services (SCDSS) director Lillian Koller, whose rank incompetence is about to be the focus of a national ABC News report.

Specifically, Haley accused Shealy and another woman of spreading a rumor that Koller is an atheist (which last time we checked was true).

“(Diretor) Koller is not an Atheist,” Haley wrote to a woman on her Facebook page. “I wish you and Sen. Shealy would quit spreading that lie. She is Jewish and the daughter of Holocaust survivors.”

Shealy was livid at Haley’s accusation – and immediately rebuked it.

“I am very disappointed to read that the Governor would say that I am spreading rumors that Director Koller is an atheist,” she wrote in response to Haley’s comment. “The fact is I told her staff about a rumor I heard in confidence and they clarified to me that she was Jewish.”

“It is a shame that words spoken in confidence with your staff are repeated on your Facebook Page,” Shealy continued, addressing Haley.

On her own Facebook page, Shealy elaborated about her encounter with Haley’s staff.

“I asked the Governor’s staff about a rumor that was going around back months ago in confidence and they told me in a private meeting that director Koller was Jewish – I accepted that answer and that was the end of that conversation and that was the last time I talked about it other than when someone else ask me the question and I told them she was Jewish!” Shealy wrote. “Now I am being reprimanded on the Governor’s Facebook Page saying I am spreading rumors… Someone owes me an apology!!!”

Shealy is a staunch ally of Haley’s. In fact she has gone out of her way during the ongoing investigation of Koller to prevent the proceedings from turning into a political attack on the governor’s office.

FITS has been on top of the scandals at SCDSS from day one … doing the work the state’s mainstream media either could not or would not do.

Earlier this year, though, one local television station finally got around to confirming a shocking story that was published by this website last summer. We’re referring to the tragic tale of Robert Guilyard Jr., a four-year-old boy who was placed into an abusive home by  Koller’s agency despite repeated warnings about his safety.

There’s the ongoing failure of this agency’s child support enforcement database – or the total lack of follow-through Koller’s agency has shown with regard to a food stamp waiver touted by Haley in her so-called “war on fat.” There are also questionable consultant payments and allegations of cooked books at its “welfare to work” program (as well as its food stamp system).

Despite this abysmal record, Haley has refused to fire Koller.

Lawmakers familiar with the disaster at SCDSS are becoming increasingly frustrated with the governor over the issue, though. In fact we’re told S.C. Senate President John Courson has privately told his colleagues he believes Koller should be fired.