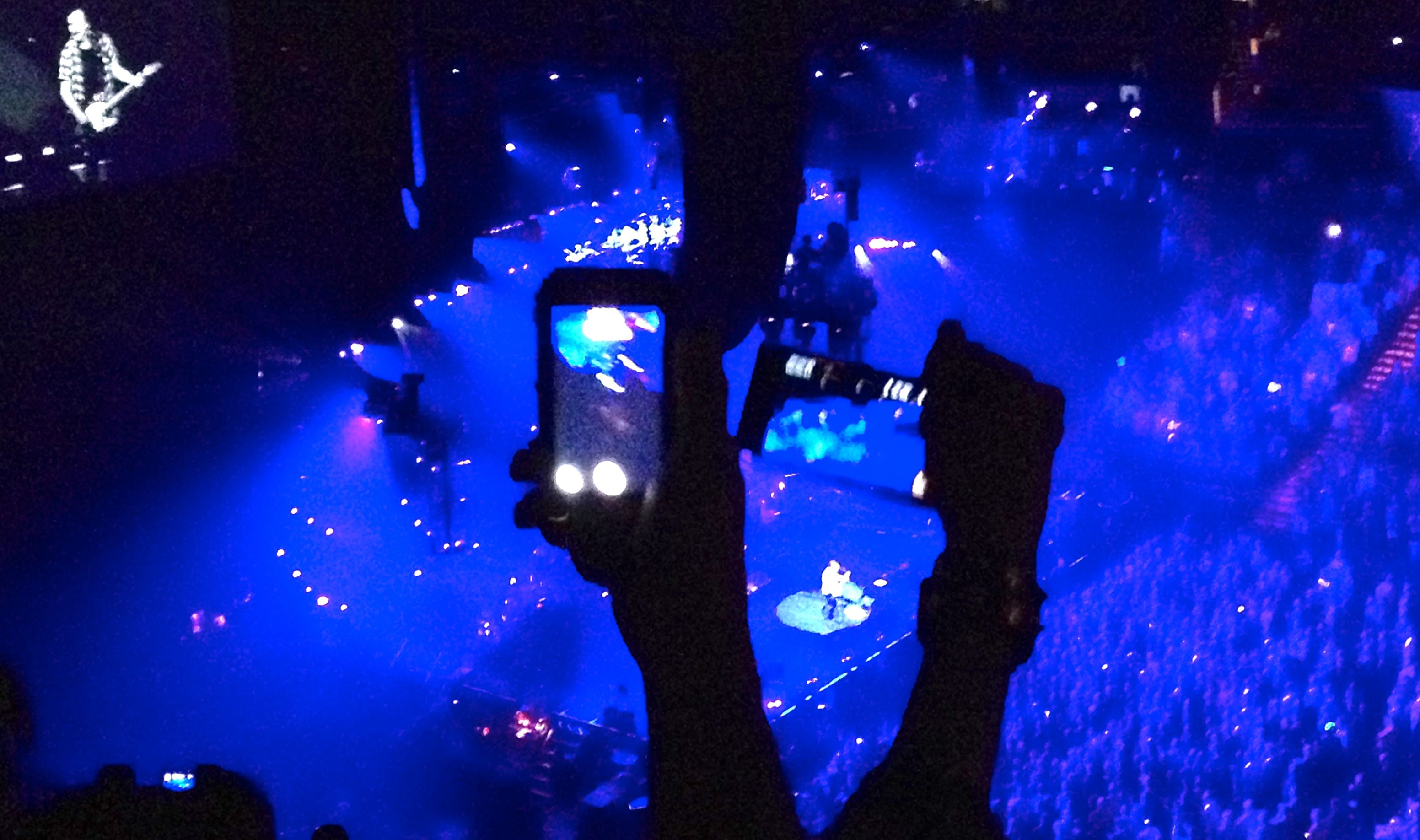 If you’re into the who, what, when, where sort of thing … here’s a pretty typical newspaper review of Pearl Jam’s October 30, 2013 performance in Charlotte, N.C.

This isn’t anything like that … in fact it isn’t even really a concert review (at least not in the way I’ve written them in the past).

This was a journey, one that began for me three months ago when my friend James told me he’d scored a pair of tickets to see Pearl Jam.

I was stoked (who wouldn’t be?) … but I’d be lying if I said the last few years hadn’t seen me lose track of this band, which transcended the grunge fad of the early 1990s to become one of the most creative, prolific, influential, critically acclaimed, commercially successful music acts of all-time.

The Beatles. The Rolling Stones. Led Zeppelin. U2. These were all bands I grew up on … but Pearl Jam was different. No one led me to this band … there was no “cool uncle” or older kid at church camp handing me an LP or cassette.

“You should listen to this,” was never something I heard as it related to the music of Eddie Vedder, Stone Gossard, Mike McCready, Jeff Ament and Matt Cameron.

I found Pearl Jam on my own … and it happened at a time when the world was unfolding in ways only seventeen-year-old boys just learning to play the guitar can understand. Everything wide open. Nothing unattainable.

Unlike a lot of people, though, Pearl Jam wasn’t just something I listened to passively … I learned to play most of the guitar parts for the band’s 1991 debut album Ten while attending The Hill School in Pottstown, Pennsylvania in 1991-92. There – after a few misfires with less talented musicians – I got hooked up with a guy named Dan Millstein, a DJ from Atlantic City who remains the most gifted vocalist I’ve ever played with.

Dan and I were so into Pearl Jam we started calling ourselves as “Eddie and Stone,” referring to the band’s lead singer and rhythm guitarist. We played countless sets over the course of that school year – with and without a full band behind us. All of these sets contained multiple Pearl Jam songs – as well as songs from Mother Love Bone, the Seattle band that spawned Pearl Jam.

One night we played under the stars at The Hill, another weekend when it turned summer we made our way up and down the public beach accesses in Myrtle Beach, S.C.

“Guess who I’m going to see tonite?” I texted Dan on the ride up to Charlotte.

“Don’t forget to put your lighter up during ‘Black,'” he wrote me back, referring to one of the Pearl Jam songs we covered countless times.

There was a kinship there … not just with another human being, but with the songs being lifted up to those heavens.

Whatever deep connection I thought I had with this band and its music quickly evaporated, though, when I saw the impact Pearl Jam has had on the life of my friend. Unlike me, James never lost touch with Eddie Vedder and Co. They’ve been his favorite band for nearly two decades – more than two-thirds of his life.

To say James is a Pearl Jam freak is understating things. He’s obsessed. And not in the “restraining orders are another way of saying I love you” kind of way … it’s more of a “let me absorb every possible measure of meaning and inspiration from this music” kind of way.

James knowledge of the band was disarming. In fact he could probably quit his day job and run a Pearl Jam fan site – and make a living off of it.

“I am the Pearl Jam YouTube king,” he proclaimed proudly.

It was scary. Eidetic.

“No,” he corrected me during an errant search for a particular Pearl Jam cover.”You have to type 2003 after the name of the song to find it.”

James went to see Pearl Jam for the first time on September 4, 1998 when he was fifteen years old. His dad had just died. Tickets were $30 apiece and somehow – he’s still not exactly sure – he convinced his mother to let him put three of them on her credit card several months before the band’s scheduled appearance at the Bi-Lo Center in Greenville, S.C.

“I remember being so excited when the tickets came in the mail,” he recalls. “But then I remember still being so frustrated because the concert was weeks away.”

When James and his buddies arrived at the arena on the night of the concert they quickly discovered their $30 general admission floor tickets were fetching much more than $30. So his friends decided to sell their tickets – leaving James without a ride home.

He didn’t care … what he took away from that night was priceless.

“I wound up on the second row,” he recalls. “My favorite memory from that experience was seeing them play ‘Wishlist.’ At the concert, what they did at the time was start playing that song and then when the first chorus came around, a disco ball dropped down over the stage that lit the room. It was awesome and was just perfection.”

It was also a jarring reminder of something he still wished was a part of his life.

“I remember when Yield came out – two days after my 15th birthday (February 3) – I listened to that song repeatedly and used to think about my dad and add him to my Wishlist of things I wanted,” he says. “That sounds kind of weird but that song really meant a lot to me then.”

Pearl Jam itself is now 23 years old. Vedder is pushing fifty. But the band’s new album, Lightning Bolt, serves ample notice that this is one of the greatest rock bands of all-time.

Sports fans (of which Pearl Jam would count themselves foremost) were reminded of this recently via ESPN’s inspirational story of former New Orleans Saints’ special teams star Steve Gleason. Diagnosed with Lou Gehrig’s disease, Gleason has been using Pearl Jam’s music as he seeks to create a digital library of memories for his son, Rivers.

If you haven’t seen this story, it’s a must …

Pearl Jam took the stage shortly after 8:00 p.m. There was no opening act. For three hours, the band plowed through thirty songs spanning its nearly quarter century of music. Vedder and lead guitarist Mike McCready in particular were at the top of their game.

A new song – “Getaway” – was played live for the first time ever.

Each of the first two sets were punctuated with extended jams – “Rearviewmirror” off of the band’s 1993 Vs. album and then “Porch” off of Ten. “Daughter” – the hit single off of Vs. – was especially tight, with Vedder briefly channeling Snoop Dogg’s “What’s My Name” during its jangling coda.

They were on. Even if the energy of the crowd was a little disappointing. Of course given the contact high I was getting from all the pot smoke in the arena, that’s not surprising.

Still, McCready didn’t want to stop playing. In fact long after the stage lights had been shut off and the house lighting turned on (the band covered Bob Dylan’s “All Along The Watchtower” bathed entirely a harsh yellow “it’s time for all of you to go home” glare) he was still trying to coax his bandmates into another cover (Lynyrd Skynyrd’s “Simple Man”).

That guy would have played all night …

What an amazing song …

Anyway, here are a few pics I snapped from the show. Enjoy!

Was Jesus A Socialist?