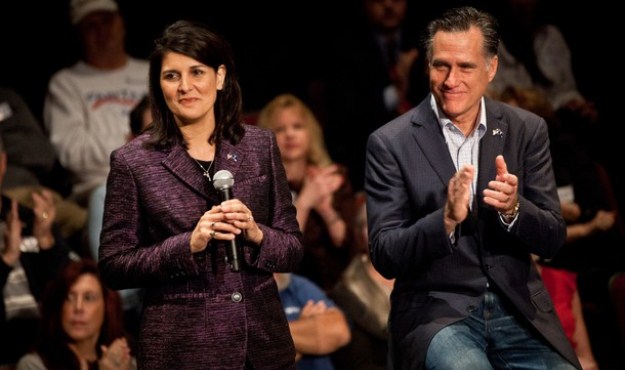 Talk about an “axis” of special interest evil, people … as those three firms basically control the flow of legislation at S.C. State House.

On the partisan front, Haley has the backing of former SCGOP chairman Katon Dawson and his successor Karen Floyd – in addition to the support of current SCGOP chairman Chad Connelly (who recently gave Haley’s reelection bid a $50,000 check from the party).

Add it all up and that’s some serious insider firepower people … not to mention the latest evidence of the extent to which Haley has sold out her limited government roots in exchange for the backing of the “powers that be” in South Carolina.

Seriously, whatever happened to Haley’s “movement” to “take government back?” Or her promise “not to stop fighting” until she had secured a “conservative House” and a “conservative Senate?”

Yeah … apparently that was all talk, people.

Anyway … the real coup of Haley’s big campaign finance rollout wasn’t the laundry list of South Carolina special interest luminaries she rolled out, though. It was the name of a non-South Carolinian – former Mitt Romney adviser Beth Myers.

Tangentially Myers is connected to South Carolina via her parents (who reside in Greenville, S.C.’s exclusive Cliffs at Glassy development) but it is her connection to the former GOP nominee which matters to Haley.

“This is basically Romney giving Nikki his rolodex and his blessing in the donor world as Nikki’s payback for her endorsement,” one GOP operative told FITS. “I wouldn’t be shocked if Mitt Romney even attended a fundraiser or two for her personally. I wonder if her out of state dollar amount will rival her in state dollar amount?”

Haley endorsed Romney in advance of the 2012 “First in the South” presidential primary … a decision ended poorly for both of them (at least in the short term).

Looks like Haley is now laughing all the way to the bank, though.