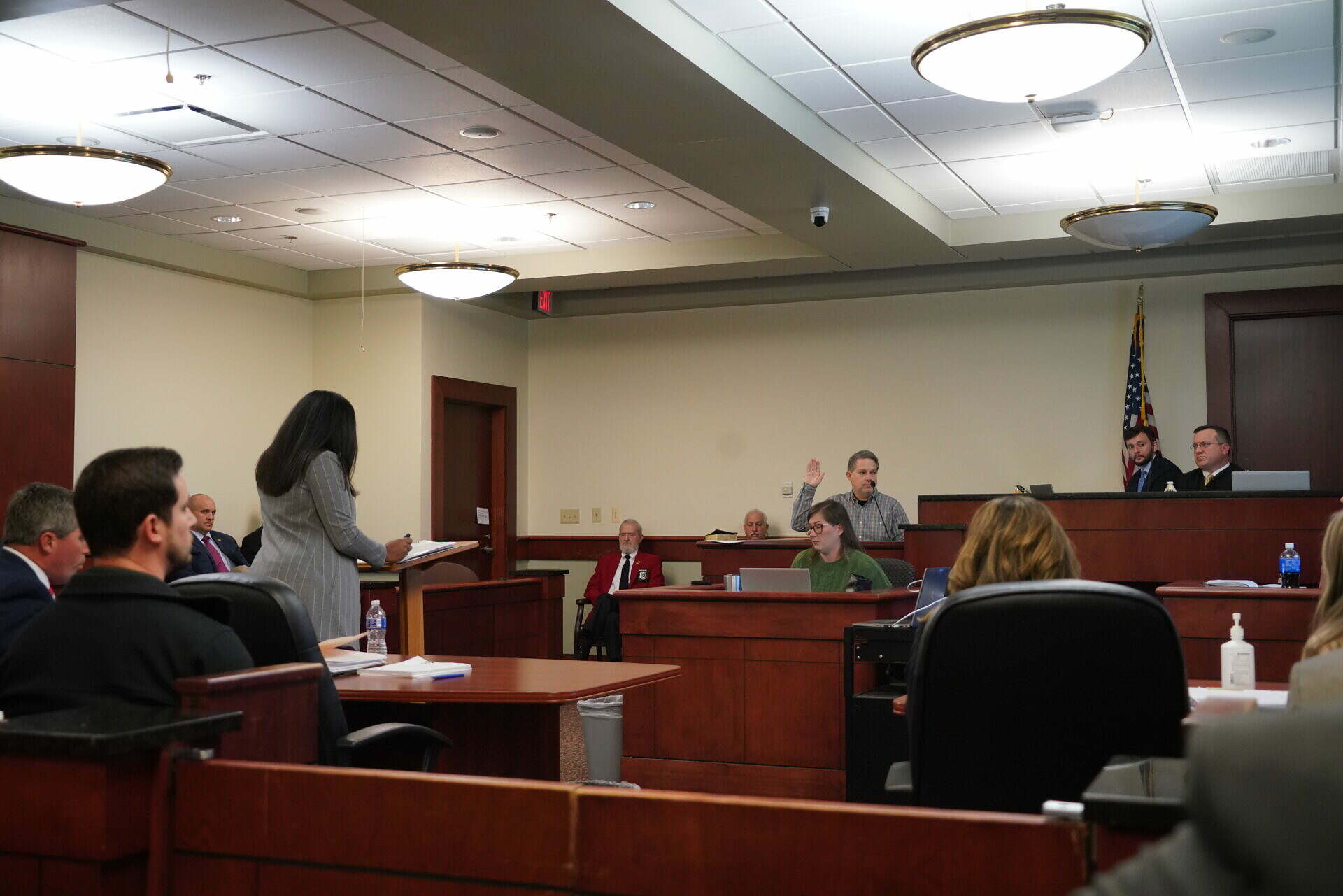 A month ago, this news outlet published a report detailing allegations of child sexual assault tied to the star witness in a murder trial scheduled to begin today (January 9, 2023) in Lexington County, South Carolina.

Are the allegations credible? And will they impact the state’s case against accused killer Bradley Walker?

To recap: Walker stands accused of murdering 38-year-old Aaron Peterson on July 23, 2018 at a mobile home in Pelion, S.C. Three other people – including a small child – were wounded in the attack. Walker is facing one count of murder, three counts of attempted murder and one count of using a weapon during the commission of a violent crime. He has been incarcerated for more than four years at the Lexington County detention center as he awaits trial.

Sources familiar with this case claim the genesis of the shooting was an alleged attempt by Peterson’s wife – Elizabeth “Lyz” Peterson – to engage the couple in the practice of polyamory, a.k.a. when two people in a purportedly monogamous relationship decide to pursue consensual romantic and/ or sexual liaisons with additional partners (together or separately).

Walker was one of the couple’s polyamorous prospects, source familiar with the case told me.

When things didn’t work out with the Petersons, a scorned Walker became enraged and shot up their mobile home … or so the prosecution’s theory goes.

Lyz Peterson was one of the individuals wounded in the shooting. So was the star witness for the prosecution – 28-year-old David P. “Bear” Hawkins III. Like Walker, Hawkins was among the polyamorous prospects of Lyz Peterson, according to sources familiar with the case.

In fact, Hawkins and Lyz Peterson have been living happily ever after in the aftermath of her husband’s death …

As prosecutors prepare to move forward with this week’s trial, there is a potentially serious problem with their case against Walker. As I noted in my original report, Hawkins had images depicting the sexual assault of a child on his mobile phone – one of several devices collected from the scene of the crime four-and-a-half years ago.

According to an investigative report prepared in connection with this case, a court-ordered forensic analysis of Hawkins’ phone conducted on December 9, 2022 revealed “explicit child pornography pictures located on the device.”

These pictures were “stored on an SD card located inside the device,” the report found.

Investigators and prosecutors refuted that contention in court last week, saying the images were not on an SD card but rather “simply there in the background.”

How did they get there? So far, no one seems to have an answer to that question …

The presence of these images on Hawkins’ phone was first reported to authorities in November 2021 by former Lexington County Sheriff’s Department (LCSD) deputy Brian Setree, who was assigned by the court to investigate the murder.

“I believe it is in the best interest of the public to report this information,” Setree wrote in a November 8, 2021 email to his former employer.

Walker’s lawyer – Lexington, S.C. attorney Debra Moore – has also been pushing prosecutors and investigators to get to the bottom of these explicit images.

“Somebody needs to investigate this,” Moore said during last month’s hearing. “This is a child being sexually assaulted.”

Prosecutors in the office of S.C. eleventh circuit solicitor Rick Hubbard have repeatedly assured circuit court judge Walton J. McLeod IV – who is presiding over the case – that this is exactly what happened.

During an August 22, 2022 court hearing, lead prosecutor Sutania Fuller claimed the matter had been referred to the office of attorney general Alan Wilson. Fuller’s assertion was reiterated months later by one of her colleagues.

“It’s been reported, it’s been investigated,” assistant eleventh circuit solicitor Robby McNair said during a court hearing last month. “It was referred to the (attorney general) for investigation. No charges are being brought because they cannot date the images (and) they can’t say whether he downloaded them.”

The problem? Those statements are not accurate.

No referral related to these images was ever made to the attorney general’s office. Instead, a Lexington County investigator reached out to a top prosecutor with the Internet Crimes Against Children (ICAC) task force and presented this attorney with a “hypothetical.” Upon hearing this “hypothetical” – which bore undetermined congruence with the case at hand – the attorney advised the investigator it was unlikely charges would be brought.

As I noted last month, that is a “far cry from a formal referral for prosecution.”

During a lengthy hearing on Friday before judge McLeod, an indignant Fuller offered an extensive and exhaustive defense of her office’s handling of the case – slamming both defense attorneys and this news outlet for allegedly providing false information to the public.

“They are trying to backdoor this information into my trial,” Fuller said.

Wait … her trial? I was under the impression it was the state’s trial.

“What has been presented to this court is disingenuous,” Fuller continued. “I did nothing wrong. My office did nothing wrong. I did not turn a blind eye to the sexual abuse of a minor. The suggestion I would ignore child pornography for the sake of this case is wrong.”

Fuller implored judge McLeod to issue a written order affirming “that (the court) has not been misled” and that any allegation she or her fellow prosecutors misled the court is “wrong.”

To prove her points, Fuller called multiple witnesses to the stand during last week’s hearing. Her first witness – sergeant Adam Creech of the Lexington sheriff’s department – testified the images found on Hawkins’ phone were “cached thumbnails … artifacts, remnants” which could not be adequately sourced so as to determine their origin.

“Based on the thumbnails you cannot source (the images),” Creech testified, claiming the images only had a “modified date” as opposed to more detailed metadata.

What did the images portray? (Warning, graphic content). According to Creech, the images in question depicted a bound female between the age of 7-10 with her genitals exposed and the genitals of an adult male present in the foreground.

“There was no investigative merit to proceed,” Creech testified. “No probable cause.”

Despite being unable to determine the origin of the images, Creech testified that they definitively ruled out Bear Hawkins as a suspect in the sexual assault.

“That is not the same adult male,” he said, citing his years of experience in similar cases.

Creech did not elaborate as to any of the methods employed (or not employed) to rule Hawkins out as a suspect.

In her response to Fuller’s presentation, Moore claimed the prosecution was relying on Hawkins because they had “no evidence placing (Walker) at the crime scene.” And while she did not say whether she planned to try and introduce the discovery of the images during Walker’s murder trial, she hinted that it was relevant to his defense.

“(Hawkins)’ character is so important,” Moore said. “And he’s got the most reprehensible material on his phone.”

“I’ve never said they weren’t what they were,” Fuller fired back. “They are what they are.”

As I have consistently noted, I have no idea whether Walker is innocent or guilty of the crimes of which he has been accused. A jury of his peers will ultimately decide that (hopefully based on more than just the word of “Bear” Hawkins). From the beginning, my goal in covering this story has simply been to “ensure that credible allegations of child sexual assault (were) properly investigated and referred to the appropriate office for prosecution.”

Based on everything I have seen, that did not happen in this case. And I believe it is abundantly clear from court transcripts that prosecutors in Hubbard’s office – at a minimum – provided the court with inaccurate information regarding the status of the investigation into these images.

Will that come back to bite them?

According to my sources, Walker’s defense team believes it has identified the underage victim depicted in the images found on Hawkins’ phone.

Perhaps this will prompt investigators to initiate a proper inquiry into this matter? And compel Hubbard’s prosecutors to make an actual referral to the attorney general?

Thanks for covering this! I’m pretty sure I know how it went down & hope justice is served. Aaron was part of my family. I’d hate to see an innocent man in prison for life, but due to the lack of proper forensics at the crime scene and the biased judge/prosecution, I’m thinking it will happen unless the jury picks up some of the more subtle clues that something is fishy.

I second that.I attended the trial and it was a disgrace to our judicial system on the part of prosecution and the j….

They Do Not have the weapon they claimed belongs to Bradley Walker.