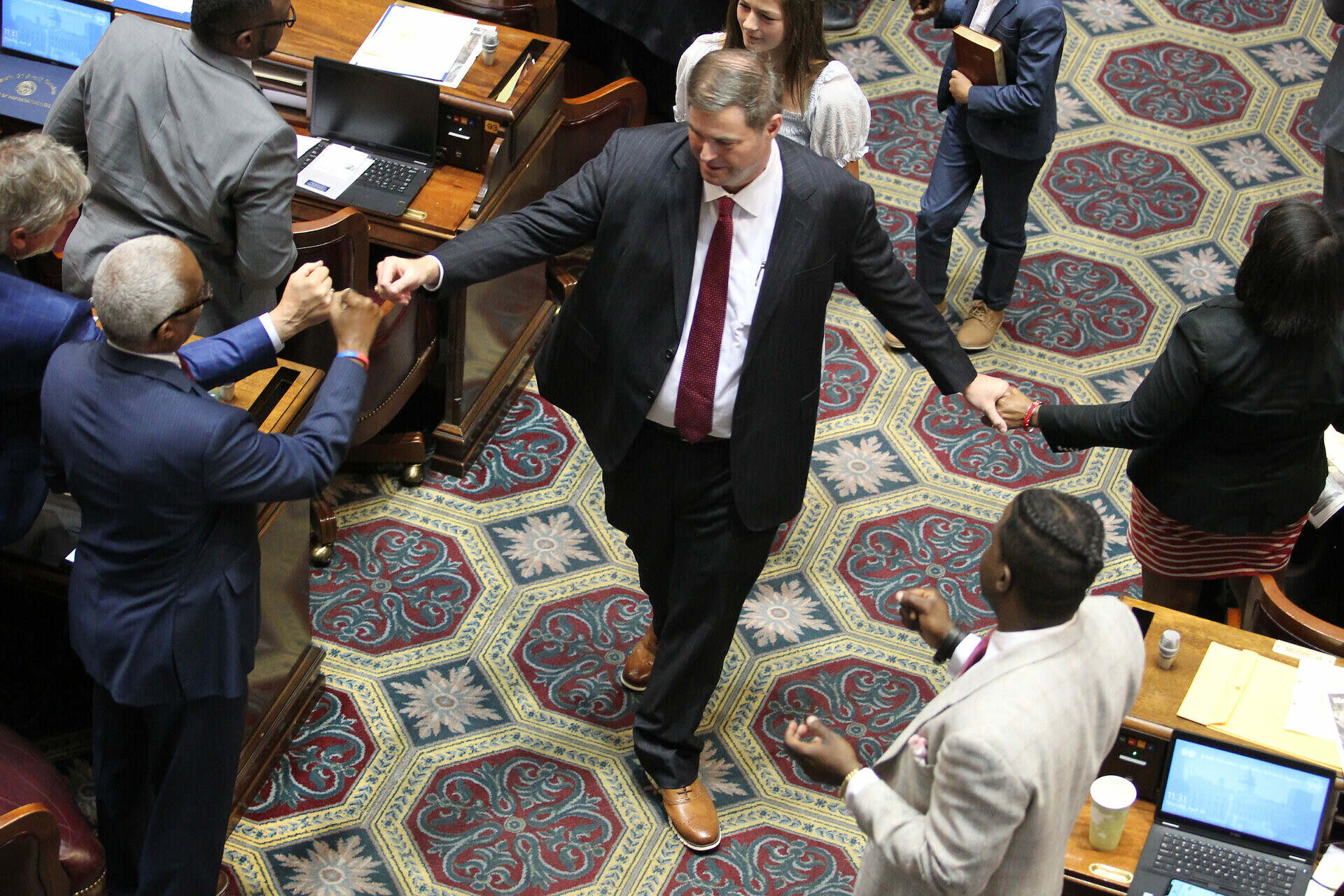 Nearly twenty members of the South Carolina House of Representatives’ “Republican” caucus may not be part of that organization for much longer … assuming a group of establishment GOP lawmakers get their way, that is.

This news outlet previously reported (here and here) on some drama that went down during the House’s organizational session last month regarding a so-called “loyalty oath.” This oath – which is being pushed by new “Republican” majority leader Davey Hiott of Pickens County and S.C. speaker pro tempore Tommy Pope – would prohibit members from endorsing or campaigning on behalf of anyone challenging a GOP incumbent in next spring’s primary elections.

It would also prohibit lawmakers from posting images of the House’s electronic voting board on their social media pages – and from discussing the “internal processes” behind House votes during public appearances.

Basically it’s an incumbent protection ultimatum – accompanied by a muzzle.

I made my thoughts on this oath perfectly clear during a recent episode of our popular ‘Week in Review‘ program, referring to the lawmakers who signed its as “cowards” and accusing them of “surrendering their ability to represent (constituents) effectively by basically saying that they are going to march in lockstep with the GOP leadership.”

“That is not the kind of leader you want representing you in Columbia,” I noted.

According to my sources, eighteen (18) members of the House “Republican” caucus refused to sign the oath given the draconian restrictions it would have placed on their right to share information with their constituents.

And good for them …

Here’s hoping they retain the courage of those convictions when House members gather this Tuesday afternoon at the state capital for the convening of the 125th regular session of the S.C. General Assembly.

As I noted previously, a so-called “extreme moderate” coalition of between 25-30 ostensibly “centrist” GOP lawmakers are pushing to have the eighteen conservatives who failed to sign the oath kicked out of the caucus. This group is reportedly being led by Hiott, Pope, Jay West of Belton and Micah Caskey of West Columbia.

Meanwhile, a similarly sized group of lawmakers led by newly elected speaker Murrell Smith – the highest-ranking member of the chamber – favors finding a resolution with the “rogue” conservatives.

Smith’s group has reportedly lost that battle, though, which has weakened the chamber’s new leader before the House even gavels to order for the coming.

All of these atrocious outcomes have been “achieved” despite gargantuan new taxpayer investments in government … expenditures which have fueled the perpetuation of an antiquated, corrupt and duplicative bureaucracy which does all sorts of things government has no business doing (like running power companies, ports and hospitals, etc.).

Not surprisingly, the SCGOP-controlled General Assembly has ranked as the most liberal “Republican-controlled” state legislature in America three years running.

Make no mistake: This “loyalty oath” is about nothing more than silencing those members of the legislature who want things to change.

House “Republicans” are scheduled to meet tomorrow (Tuesday, January 10, 2023) immediately upon the adjournment of the S.C. House – which gavels to order at 12:00 p.m. EST. Count on this news outlet to provide our readers with an update on what transpires at that gathering.

Hopefully all eighteen lawmakers hold firm in their commitment to their constituents, not the party bosses who have presided over decades of failed, fiscally liberal “Republican” rule.

The Speaker needs to clean out the RINOs that are making him look silly. RINOs like Mica Caskey beat his GOP primary opponent by an only handful of votes. He won’t survive the next election, so the Speaker needs to jettison him now before he takes more republicans down with him.

I cant believe so many Republicans in the statehouse just gave away their voice. They are cowards.

Which ones support the oath?

Senator Leningrad Lindsey (T-SC) said it best in a YouTube video that the Republican Party was “bat-shit crazy”. That still continues. Sanity has not returned to the Republican Party. I used to be an independent voter. Now, for the time being, I am a straight party voter.

Will, with seven kids, I can see where you would be a school choice advocate. But robbing public schools of funding to go to parents or private schools would be bad . My wife and I don’t have any kids, but if school choice comes to fruition, then I would demand a rebate on my percentage of taxes that goes to parents and private schools. I am not from Allendale County, but there are no private schools in that county. What are parents in that county going to do?
School choice needs to have a means test to it to weed out parents that can afford a private education for there kids versus those parents for whom it would be a struggle.

So, who are the 18 good lawmakers who refused to sign this crap? That would be good info to include in your article, assuming it isn’t buried somewhere that I missed.