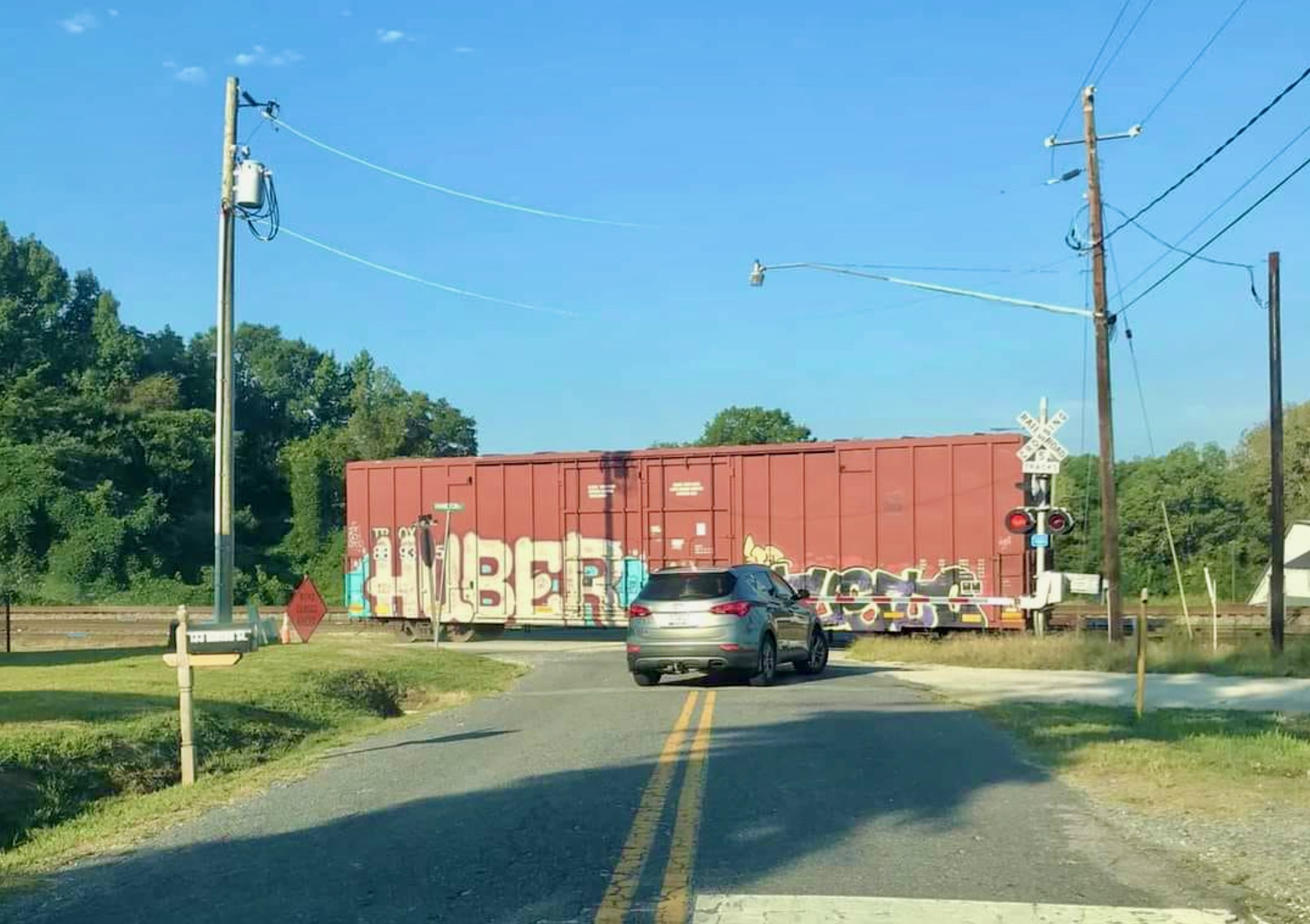 The town of Chester, South Carolina is up in arms – accusing multiple railroad lines of blocking vehicular crossings as a retaliatory strike in their ongoing “war” against its citizens. Why would these railroads retaliate against the good people of Chester? Or be at war with them in the first place? Because citizens have been complaining for months about trains blocking road crossings at peak drive times.

“Citizens have complained about (the railroads) blocking the track crossings,” one Chester resident told me earlier this week. “Citizens have cited laws governing how long they’re allowed to block the track. So the railroad engineers have tried to trump them by saying they can block the track as long as necessary on an active train – and have even started dropping individual cars to block roads!”

Pictures and videos provided to this news outlet from a Facebook group entitled “Chester SC Train Reporting” certainly appear to validate this allegation – including images and clips depicting single freight cars blocking intersections or train locomotives which appear to have pulled just far enough into a crossing to keep cars from being able to pass through.

Inconvenienced citizens aren’t the only ones sounding the alarm, either. One local law enforcement leader recently attempted to raise awareness about the problem – citing a growing public safety threat.

“We have situations where deputies from my office are responding to calls, emergency calls, and they can’t get through these intersections and they’re having to go sometimes five or seven miles out of the way to get to these calls,” Chester County sheriff Max Dorsey told reporter Indira Eskieva of WCNC TV (NBC – Charlotte, N.C.).

According to the sheriff, his agency isn’t the only core government service provider encountering difficulties due to these blocked crossings.

An emergency medical services (EMS) worker who posted in the train reporting group concurred with the sheriff’s assessment – saying her team was recently forced to bypass one of the blocked crossings while en route to an “urgent call.”

Jennifer Brecheisen – a candidate for S.C. State House – is one of the moderators of the train reporting group. According to Brecheisen, South Carolina needs to update its laws governing “trains blocking two-lane roads.”

South Carolina’s current railroad crossing law dates back to 1902. According to this statute, railroad system operators face fines of anywhere between $5.00 and $20.00 if they fail to move their trains through a crossing within five minutes of receiving a verbal warning from law enforcement.

Obviously, that isn’t much in the way of a disincentive …

“Chester Officials, EMS responders and residents need to come together with the train companies to resolve this issue,” Brecheisen said. “Our town gets locked up, and many who are in wheelchairs or walking cannot take the bypass around town. We recognize the need for trains, but we do not like that we cannot navigate our town while a train is blocking three roads for ten hours.”

(Via: Jennifer Brecheisen for S.C. House)

According to Brecheisen (above), “even if they were able to give us a schedule of when they will be blocking, that would be somewhat satisfactory – so we can all make our arrangements.”

“We have no public transportation system and we are a very low income area with many who do not have cars,” Brecheisen added.

While the plight of Chester citizens has been picking up media attention in recent weeks, it has yet to translate into unblocked crossings.

“The blockings have picked up big time,” one resident told me.

Chester is a town of approximately 5,269 people located approximately 45 miles south-southwest of downtown Charlotte, North Carolina. It has seen its population shrink by more than 28 percent from its peak of more than 7,300 people in the early 1990s.


This news outlet reached out to the railroad lines accused of blocking the crossings. Only one – Norfolk Southern – responded to our inquiries.

“Trains have to stop for many reasons – maintenance issues, crew hour limits (similar to airline pilots, this is regulated by the federal government), or congestion ahead, among others,” Norfolk Southern spokesman Connor Spielmaker said in a written statement provided to this news outlet. “Trains are also long, and sometimes have to stop in spots where the front of the train is just over a crossing to ensure the back of it is clear, giving the appearance that they stopped there deliberately to close the crossing. That is never the case.”

According to Spielmaker, “Norfolk Southern’s goal is to keep trains moving, and we never want to inconvenience any member of a community with a stopped one.”

“We work hard to keep them moving and to minimize these impacts whenever they happen,” he added. “Relationships with local communities and the officials representing them are important to us, and we look forward to continuing to build the ones we have in Chester.”