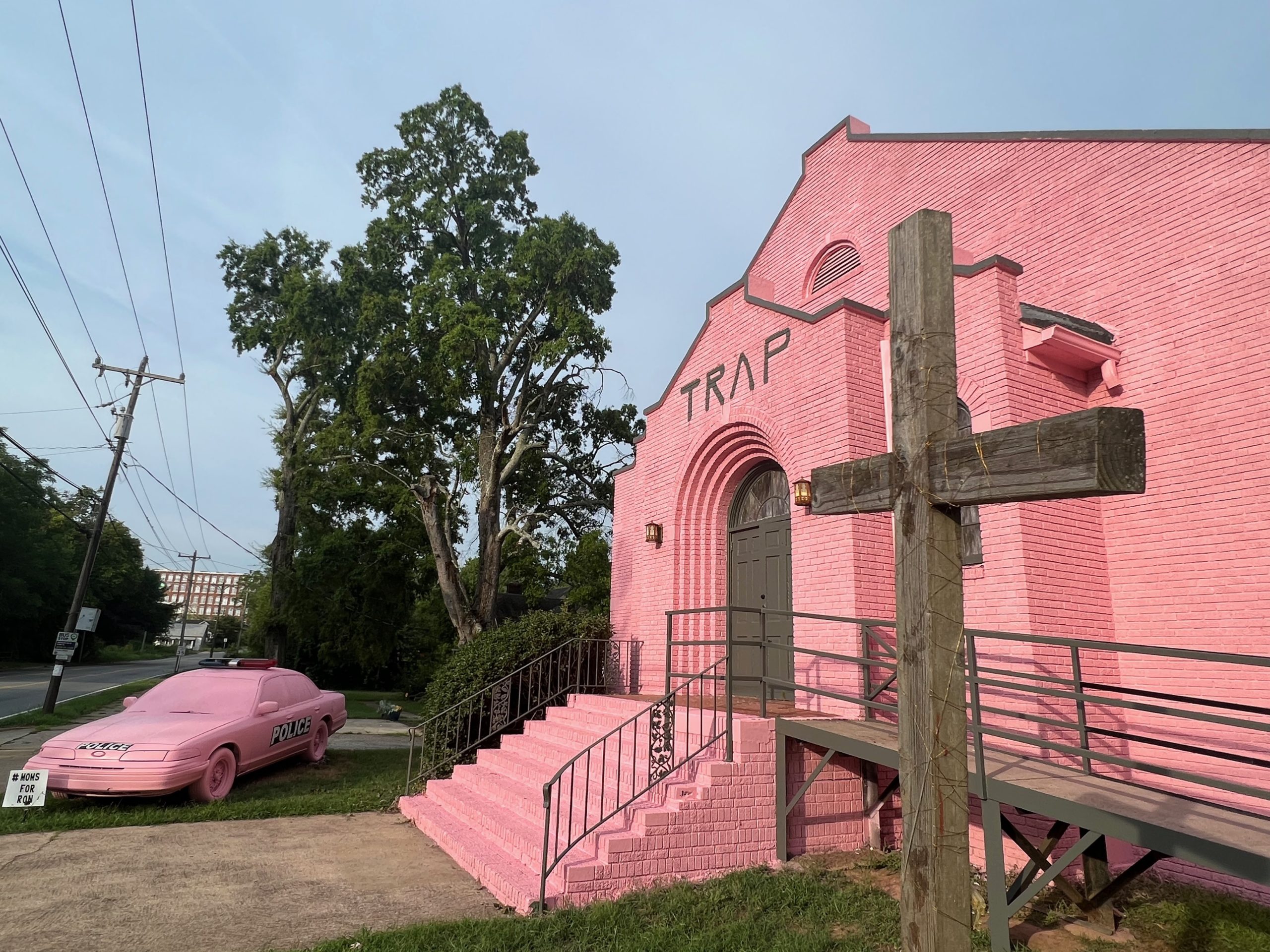 The man who is driving the media coverage of the William Timmons’ congressional sex scandal turned heads in downtown Greenville, South Carolina on Friday when he painted a former Baptist church hot pink.

Along with a city of Greenville police car … and a busted oven.

The brightly hued performance art of real estate developer Ron Rallis was on full display at 825 Woodside Avenue – the former home of Bibleway Full Gospel Missionary Baptist Church. According to Rallis, his company purchased the property from the church several months ago for $425,000 – but he let parishioners continue to use it until they were ready to move out.

When FITSNews’ director of special projects Dylan Nolan and I arrived at the church shortly before 8:00 a.m. EDT on Friday morning, the exterior of the facility had been given a fresh coat of pink paint – with the word ’TRAP’ painted in dark letters above the front entrance.

That’s a reference to the Trap Music Museum in Atlanta, Georgia – which features a similar hot pink color scheme.

Passersby slowed and stopped to gawk and snap pictures of the church, which quickly drew a patrol car from the Greenville sheriff’s office as well as the WYFF news crew.

As the drama swirled outside, Dylan and I were setting up our cameras inside …

At 10:00 a.m. on the dot, the former sanctuary of this mid-20th century structure played host to my extensive interview with Rallis – who has turned the Palmetto political world on its ear over the last few months with his social media pronouncements targeting Timmons and his alleged lover, Paula Dhier.

To recap: Timmons – a second-term congressman and fifth-generation scion of one of the Palmetto Upstate’s most prominent families – issued an unsolicited 18-word statement to this news outlet on June 26, 2022 in response to initial inquiries about his alleged affair with Dhier, a businesswoman/ socialite.

Since then, Rallis has been driving the media coverage of this saga – accusing Timmons of abusing his power by having him arrested a year ago on a trumped-up charge involving his estranged wife.

As I noted in the lead-in to my interview with Rallis, it was Timmons who made this affair a news item … but Rallis who has turned it into a story.

So … where is the story headed?

Stay tuned for an excerpt from my extended conversation with Rallis tomorrow afternoon in our newest ’Week in Review’ segment. And look for the full interview to drop early next week …