‘I didn’t know what it is … do you know what a writ of habeas corpus is?’ 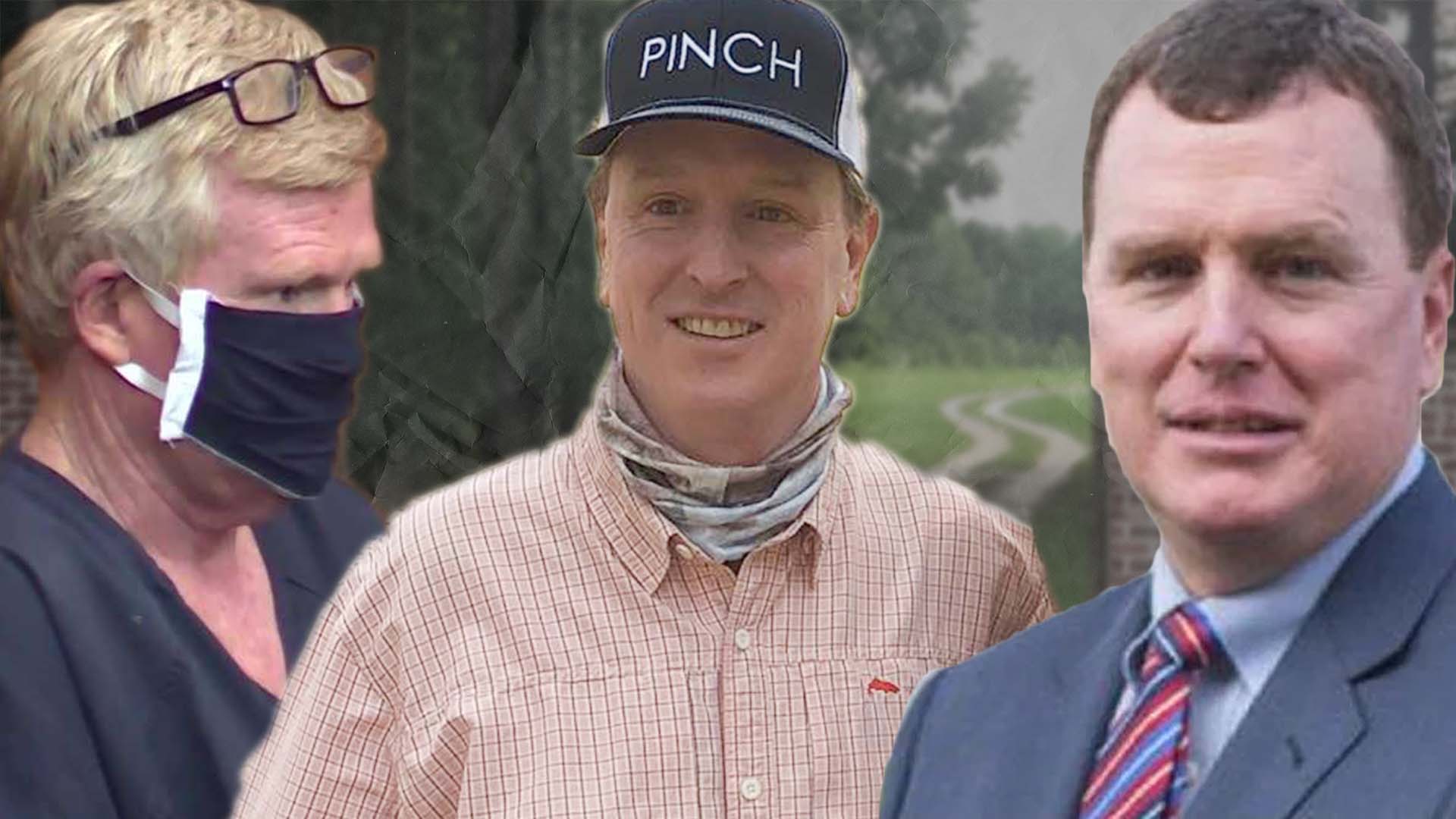 by  MANDY MATNEY and LIZ FARRELL ||

Since Alex Murdaugh was first arrested in September, his siblings have not publicly supported the disgraced former lawyer who is at the center of a snowballing true crime saga.

However, it appears that Alex Murdaugh has maintained communication with all three of his siblings while he has been in jail at the Alvin S. Glenn Detention Center in Columbia, South Carolina.

Through a Freedom of Information Act request, FITSNews obtained recordings from 11 phone conversations that Alex Murdaugh made while he was in jail.


In a two-month period, Alex made almost 100 phone calls — most of them to his son Buster, his brothers Randy and John Marvin, his sister Lynn and his sister-in-law Liz.

Though none of his family members were seen at his October bond hearing, Alex Murdaugh appears to still have their support behind the scenes.

Since the murders of Maggie and Paul Murdaugh this past summer, John Marvin and Randy Murdaugh have sat down for one media interview with ABC, which was filmed in June and aired on 20/20 in January. In that interview, they defended Alex, who is the only named “person of interest” in Maggie’s and Paul’s deaths.

The calls from jail have given FITSNews readers exclusive insight into the Murdaugh family’s dynamics and Alex’s manipulation tactics.

Here is what we learned from the phone calls between Alex and and his siblings.

John Marvin admitted that PMPED renamed itself because of “negative publicity”

On December 31, FITSNews was first to report that Peters Murdaugh Parker Eltzroth and Detrick had dissolved and that the firm’s partners had each created their own legal entities. All of them are practicing under the umbrella of Parker Law Group, named after John E. Parker, one of the most prominent attorneys in the Lowcountry and a named partner at PMPED.

In a statement to the media, PMPED attempted to ignore the Murdaugh Mess, and claimed that it had decided to change its name because they wanted to honor Johnny Parker for his 50 years of “outstanding service.”

However, when John Marvin broke the news of the dissolution to Alex during a January 4 phone call, he had a different story.

“The law firm has dissolved and they’re under a new name,” John Marvin told Alex.

“I didn’t know nothing about that. What is that?” Alex replied.


“Yes, because of all of the negative publicity and all of the stuff they’re going through,” John Marvin said.

“What is the new name?” Alex asked.

“I think each one of them opened up an LLC partnership or LLP in each parnter’s name and operates under Parker Law Group,” John Marvin Murdaugh explained.

“Is there anything I can help with?” Alex asked.

Alex appeared surprised when John Marvin told him Cory Fleming was fired from his law firm.

It seems Alex went several months after Fleming’s name was removed from his former law firm before finding out his friend — and alleged co-conspirator — had been terminated.

“I mean obviously Cory (Fleming) has been fired, you knew about that didn’t you?” John Marvin asked his brother.

“Legitimately for real?” Alex asked, apparently assuming that it could have been just for show due to media pressure.

John Marvin said that he understood that Cory was permanently fired from his law firm Moss and Kuhn (which was previously Moss, Kuhn and Fleming).

John Marvin asked Alex to make a statement to help his alleged co-conspirators.

John Marvin told Alex that he believed he should “talk about certain things” that could “make a difference.”

“You know, if you get charged with something that you did, acknowledging it and accepting it and making it clear who didn’t do anything,” John Marvin Murdaugh told Alex. “Everybody’s implicated.”

Alex was attempting to figure out something financially with his attorneys.

“I’ve got to get this finance stuff straight with Jim and I put some thought into it,” he told John Marvin on December 1.

“What are they working hard on … have all the charges been brought up?” John Marvin asked.

“See, I don’t know,” Alex said. “I suspect if they do it like they’ve done everything else, they’ll sit and wait until something else comes up and then do some more charges.”

John Marvin asked Alex to speak with his attorneys about making a statement to absolve his alleged co-conspirators.

“It’s worth talking to Dick and Jim about,” John Marvin said. “They don’t have the same issues that everybody in the firm and everybody else has.”

“Who isn’t having the same issues? Alex asked.

“Dick and Jim,” John Marvin said. “They’re looking at it from a whole different perspective.

Alex Murdaugh appears to be chummy with Randy Murdaugh

In October, Randy Murdaugh filed a lawsuit against his brother Alex for $90,000 of unpaid debt. The lawsuit was seen by many as a scheme to keep assets away from the victims.

However, during two calls on December 1, Randy and Alex Murdaugh didn’t talk like two brothers fighting over unpaid debt in a lawsuit.

They were very chummy as they chatted about sports scores and Alex boasted about his new workout routine.

“I haven’t exercised in 25 years,” Alex tells his brother.

LISTEN TO ALEX AND RANDY’S DISCUSSION BELOW

Alex and Randy Murdaugh appeared to be unfamiliar with basic legal terms.

On the same phone call with Randy Murdaugh, who is an attorney at Parker Law Group/ PMPED, Alex discusses a strategy his lawyers are using to help get him out of jail.

“Dick (Harpootlian) came to see me yesterday and told me that they filed a … you know I’ve heard of this too but I didn’t know what it is … do you know what a writ of habeas corpus is?” Alex Murdaugh asked Randy.

“I know it’s something directly to the Supreme Court, but other than that, no idea man,” Randy said.

“Apparently, there’s nobody with this kind of stuff that has never gotten bond,” Alex tried to explain. “It might be, you know, a huge bond, but they get a bond and you’re constitutionally entitled to a bond for a non-capital offense is what they tell me. And because it’s a constitutional violation, you can file a writ of habeas corpus, same thing with a mandamus for civil charge. Habeas corpus is for a criminal charge. I think they’re the same thing, just one is criminal and one is civil.”

In early November, Alex’s attorneys filed a writ of habeas corpus appeal with the S.C. Supreme Court in an attempt to get the disgraced attorney out of jail.

“You wouldn’t think a judge would say more than what the Attorney General asked for,” Randy Murdaugh said in a December 1 phone call with Alex.

During multiple phone calls, he told his siblings that he figures the time he is serving now will ultimately reduce his sentence later.

Randy apparently had knowledge of witnesses being called to the state grand jury.

During the December 1 phone call between Alex and Randy Murdaugh, Randy mentioned the state grand jury while they were talking about the possibility of Alex getting out of jail.

“I mean, the fact is, every time there’s a new case that comes up, a new revelation of you know, something you took, Bo, those same people people are very, very quickly are being subpoenaed to the state grand jury,” Randy Murdaugh said. “The quicker all of that can come to a head, the better obviously.”

Alex was very determined to get money put on another inmate’s account.

In three separate phone calls, Alex Murdaugh mentioned his immediate need to put money on an inmate named Josten Lucas’ account. Lucas is a 31-year-old inmate at Richland County who is being held in lieu of $7,000 bond for a single assault and battery charge and a shoplifting charge.

Since March 2013, Jostin has been arrested more than 40 times in Columbia and charged with 60 crimes, most of them petty, like trespassing, public drunkenness, walking in the roadway, public disorderly conduct and something called “aggressive begging.”

On January 4, Alex told both Buster and John Marvin that Liz Murdaugh, who is John Marvin’s wife, needed to put money on Lucas’ canteen account. This is a violation of the detention center rules.

Six days after these phone calls, Alex appeared to be banged up in his January 10 bond hearing. It is not yet known if the incidents are related.

Alex also bragged about winning jail bets on NFL games, which is another violation of the jail’s rules.