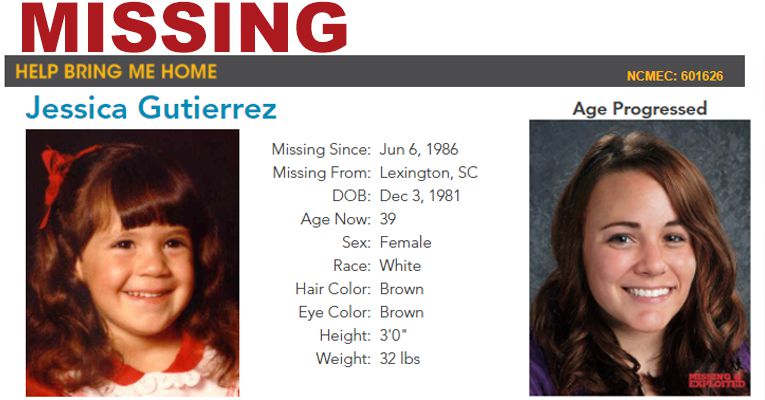 Lexington County Sheriff’s Department investigators and the family of 4-year-old Jessica Gutierrez finally have answers about who took the little girl from her home in the middle of the night nearly 35 years ago.

On Thursday morning, the Sheriff’s Department announced that a 61-year-old North Carolina man has been arrested and charged with murder, kidnapping and first-degree burglary in the June 6, 1986, disappearance of Jessica.

The arrest of Thomas Eric McDowell by the Wake Forest Police Department comes just three months after investigators announced they were taking a renewed approach to the case.


All told, more than 125 people were interviewed in the search for a suspect and more than 3,500 case file pages were reviewed.

In June 2021, the Sheriff’s Department published a video seeking more information about the cold case.

“Because of the work we did, coming together as a team, we were able to sort and connect more pieces of the puzzle about what happened to Jessica all those years ago,” Koon said.

McDowell will be prosecuted by the state AG’s office, which has had the case since February 2015.

“I want to commend the dedicated and experienced members of law enforcement as well as prosecutors in the Attorney General’s Office for their tireless efforts,” S.C. Attorney General Alan Wilson said in the release. “Without this newly discovered information, our office would not be able to prosecute the case.”

Jessica and her sisters were asleep in a bedroom of their family’s mobile home when an unknown intruder in a “magic hat” took the 4-year-old sometime between 11:30 p.m. and 9 a.m., according to Jessica’s page on The Charley Project, a website dedicated to generating leads on missing person cases in the United States and beyond.

Jessica’s sister, who was 6 at the time, remembered seeing a man in a hat take her little sister from her bed but was too frightened to tell anyone until the next morning.

The girls’ mother, Debra, believed a 27-year-old family friend with a history of sexual assault had kidnapped her daughter, according to the website.

Two years later, the man allegedly told a cellmate that he had “kidnapped a girl in Lexington County and buried her in a landfill there.” He also told the cellmate that he was wearing a “tall cowboy hat” at the time of kidnapping. When investigators questioned the man about this, he allegedly told them that he would confess to the abduction if they offered him immunity from prosecution, the site said.

Lexington County investigators have not said whether this man was McDowell. According to the website, the person of interest was never publicly identified.

In September 2021, deputies, FBI agents and SLED agents worked together to reinterview witnesses and review the case file from the beginning.

“The community has been very supportive of our efforts this past week,” Sheriff Koon told WISTV in a report that aired on Sept. 19, 2021. “They’ve spoken with investigators and welcomed them into their homes. We’re fortunate to have so many people on our side as we strive to get justice for Jessie’s family.”

On Thursday, Koon stressed that all defendants are presumed innocent but expressed hope for the Gutierrez family.

“We look forward to working with all the agencies involved to get justice for Jessica’s family and, hopefully, bring her home. They’ve been waiting a long time and we’re glad to be a part of another step in the process,” Koon said. “And the community support to the family and to those who’ve worked on this case has been invaluable. We know they’ll remember Jessica and stand with her family in the coming days.”