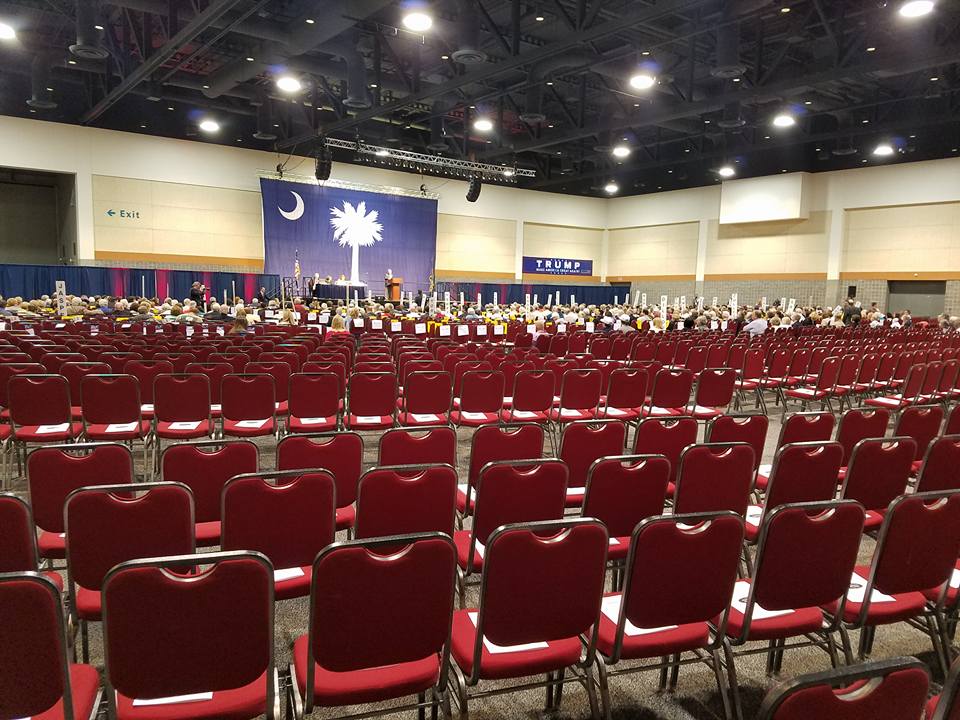 According to the lawsuit (.pdf) – which was submitted by attorney Lauren Martel of Bluffton, S.C. on behalf of activists Pressley Stutts, Walter Horin and Cole Kazmarski – the party’s decision to hold a hybrid convention on May 15, 2021 violates its own rules, state law and the state constitution.

Sound familiar? It should … the SCGOP violates its rules all the time. With impunity … and often with unintended consequences.

Will the courts hold the party accountable this time?

Late last month, party leaders voted not to hold a statewide in-person convention – ostensibly due to lingering concerns about the coronavirus pandemic. Rather than gathering together in one location (as party rules dictate), county parties will instead host in-person “caucuses” at local level. At these caucuses, delegates will cast their votes for party chairman (and three supporting statewide party offices) via paper ballot.


These paper ballots will then be reported to the SCGOP “credentials committee” in Columbia, S.C. – which will tabulate and release the final results of the elections.

Sound fair? Yes … but given the high stakes of this race, ballot integrity is of the utmost importance.

That’s right. This year’s race for SCGOP chairman has drawn statewide and national attention due to the candidacy of famed First Amendment lawyer Lin Wood – who moved from Georgia to South Carolina earlier this year to challenge McKissick. To say Wood’s candidacy has stirred things up is an understatement … as every day has generated some new dramatic headline (as well as fresh evidence of his surprising viability).

More importantly, Wood’s insurgency represents a new flank in the ongoing GOP civil war – which my news outlet has been following closely. As such, it could have potentially seismic repercussions on next year’s partisan primary races in the Palmetto State – as well as the 2024 “First in the South” presidential primary (assuming the SCGOP agrees to follow its rules and hold such an election this go-round).

Wood’s candidacy has been fueled by the unmitigated failure of the SCGOP’s new “super-majority” in the S.C. General Assembly – as well as McKissick’s previous meddling on behalf of fiscally liberal candidates in GOP primary elections. Of course it has been held back by some of his … how do I put it … “unorthodox” views.

All of the activists supporting the legal challenge are Wood supporters – but to me, that does not add to or detract from the merits of their legal argument. According to their suit, state law – as well as the due process clause of the South Carolina constitution – compel political parties to “follow their own rules before depriving members of the right to vote in a primary election.”

“A major South Carolina political party cannot simply choose not to convene an in-person convention at a single location,” the lawsuit stated. “Rather than complying with clear state law … the Defendants and other elected leaders of the South Carolina Republican party have announced a procedure whereby there will not be a single convention, but separate conventions throughout the state connected ‘virtually.'”

According to the lawsuit, the three plaintiffs “have been effectively disenfranchised by their own political party and have no other remedy than this action to protect their right to participate in a state-wide party convention.”


The lawsuit asks the court to declare that the SCGOP and its codefendants are in violation of party rules, state law and the state constitution. Additionally, it asks the court to block the SCGOP from engaging in “further violations of the law” – and seeks an order requiring the party to hold its convention “in-person … at a single location.”

Incidentally, hosting an in-person convention (and using paper ballots) is exactly what I recently recommend the party do …

During his campaign for party chairman, Wood has repeatedly accused McKissick and his supporters of attempting to rig the upcoming chairman’s vote. Meanwhile, McKissick backers maintain Wood has no “path to victory” and that his vote-rigging claims are unfounded.

Again, there is an easy way to settle this: Get all of the 870 SCGOP delegates in a room together and have them vote using paper ballots.

In an affidavit (.pdf) accompanying what has become known as the “MAGA lawsuit,” Kazmarski – a recently elected Laurens county executive committee member – warned that the SCGOP’s proposed hybrid model could create “a situation that is ripe for fraud.”

“I made promises to the people who elected me at our recent Laurens county convention to represent them at the state party meeting, and if we cannot get the SCGOP to play by its own rules there is no way I can fulfill those promises,” Kazmarski (above) wrote. “As a result, my voice, and the voices of those who elected me to present them on votes for party leaders and positions, will go unheard, and all of us will be disenfranchised.”

That is a fair point …

Do I believe Wood is within striking distance of McKissick in this race? No … I do not. I think the race is probably closer than the pundits and party establishment are expecting it to be, but I believe McKissick has a legitimate lead.

Do I believe McKissick backers are engaged in some sort of nefarious plot to rig the upcoming election? Again, no … I do not.

But irrespective of the competitiveness of this election (or lack thereof), there is absolutely no reason not to hold an in-person convention and put all of these delegate votes on the record … especially seeing as the SCGOP and GCGOP are currently praising “Republican” governor Henry McMaster for “fully reopening South Carolina” in light of collapsing Covid-19 cases.

Optics and legality aside – the SCGOP’s failure to hold an in-person convention will guarantee the delegitimization of this election (even if the vote winds up being conducted legitimately). And such delegitimization could widen what are already huge fault lines within the party.