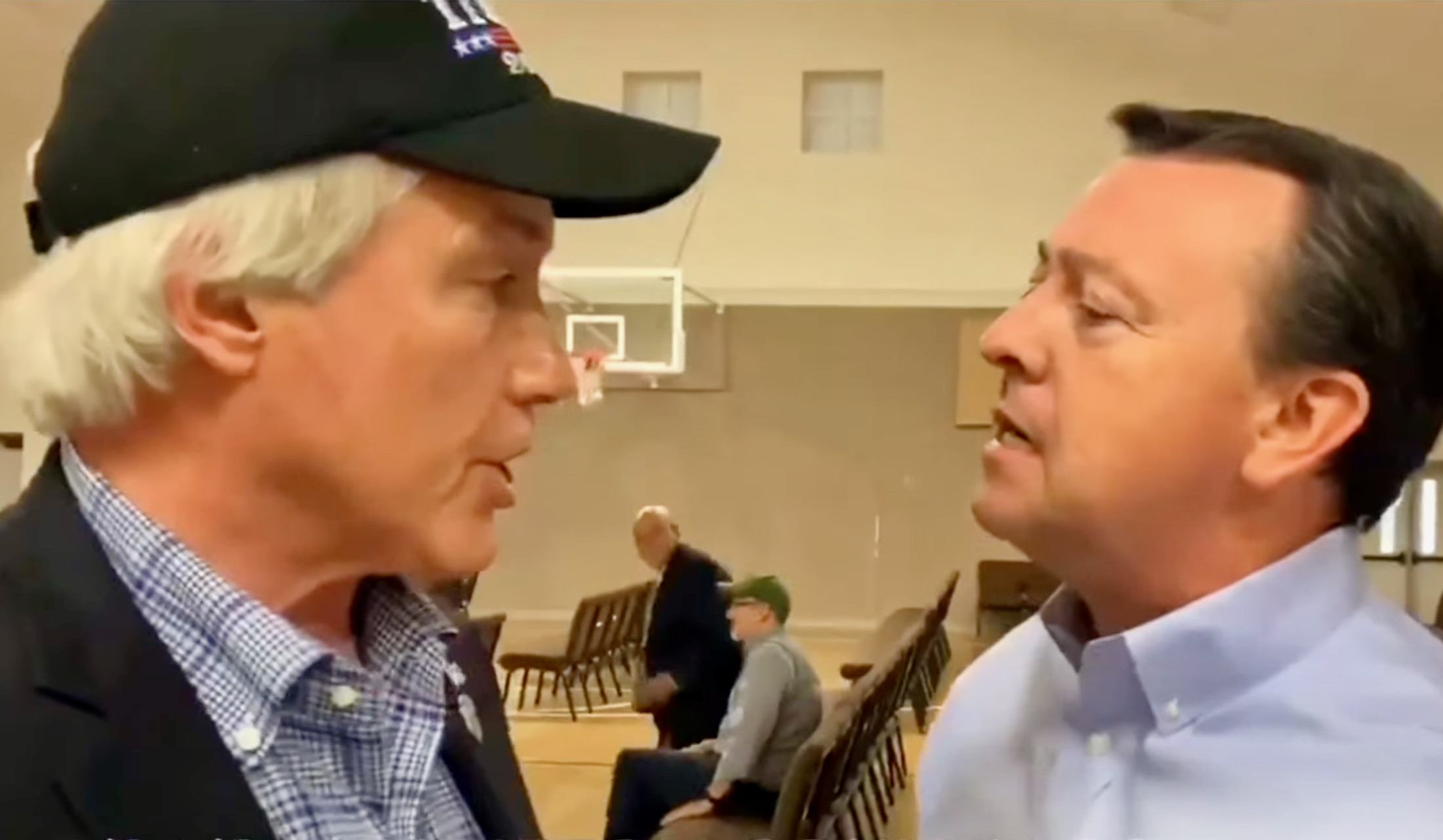 The two men vying for chairman of the South Carolina Republican party (SCGOP) had a bizarre confrontation on Monday evening following a party convention held in rural Hampton county. The terse exchange highlighted the growing acrimony between the two candidates – as well as the escalating bitterness among warring factions of the badly splintered party they hope to lead.

For those of you just catching up on this drama, incumbent SCGOP chairman Drew McKissick is seeking a third, two-year term at the helm of the party. During his first two terms, McKissick has been a glorified errand boy for former U.S. president Donald Trump – including playing a starring role in the extralegal cancelation of the 2020 “First in the South” Republican presidential primary.

Trump has rewarded McKissick by endorsing him in his reelection bid (twice) – even though the 52-year-old political operative is being challenged by one of Trump’s former election lawyers, Lin Wood.

Wood moved to South Carolina earlier this year to challenge McKissick, and his candidacy (circus?) has quickly become an existential threat to the established “Republican” order. Even if McKissick wins reelection next month – an outcome his supporters insist is inevitable – the party could find itself permanently fractured heading into the 2022 election cycle.

Certainly, Monday evening’s exchange between the two candidates offered a glimpse into the expanding chasm …

The drama began when Wood – who allegedly heckled McKissick during his address to the county delegates – confronted the party chairman as he was leaving convention hall. During the ensuing exchange, Wood leveled a vague insinuation about McKissick and U.S. senator Lindsey Graham.

“I know about you and Lindsey,” Wood told McKissick. “You need to get out of the race now. Nothing can stop what’s going to come.”

An edited version of the exchange was posted to YouTube by the Republican Liberty Caucus of Greenville.

(Via: Republican Liberty Caucus of Greenville)

During the exchange, McKissick rebuked Wood for his oft-repeated claim that McKissick is a peddler of “Chinese pornography.” That’s a reference to Rampart PAC, a political action committee McKissick financially supported during a previous election cycle. The PAC apparently allowed its domain name to expire – which resulted in explicit content being posted to its former uniform resource locator (URL).

Wood referenced Rampart PAC during a conversation with me earlier this month – implying McKissick was linked to “Chinese pornography.”

McKissick clearly did not take kindly to the allegation …

“Just get your stuff off the internet, buddy,” McKissick told Wood.

Toward the end of their exchange, though, McKissick changed his tack – encouraging Wood to make his allegations public.

“Bring it on, Lin – I’m trying to tell you,” McKissick fired back.

Wood backers have yet to specify what they “know” about McKissick and Graham (whose personal life has been the source of perpetual speculation since he was first elected to the U.S. Senate nineteen years ago).


Despite espousing what I would charitably describe as some highly unorthodox views, Wood has nonetheless benefitted from a groundswell of grassroots support – enabling him to emerge as a surprisingly viable challenger to McKissick. The 68-year-old attorney – who gained fame in the 1990s representing exonerated Centennial Olympic Park bombing suspect Richard Jewell and the parents of JonBenét Ramsey – has the backing of MySCGOP.com – a group advocating a “purge” of what it refers to as the “RINO establishment elite” in the Palmetto State. According to its website, MySCGOP.com is comprised of “like-minded patriotic and conservative groups (from) across South Carolina who want to drain the swamp in Columbia.”

This group has made quite an impact at county conventions across the state – including a delegate coup in Greenville county earlier this month which helped provide critical early momentum for Wood’s candidacy.

As noted in a previous post, I am covering this race closely because of its potential impact on the 2022 GOP primary elections in the Palmetto State as well as the 2024 “First in the South” Republican presidential primary.

Beyond that, though, the race is emblematic of the broader battle taking place across the country for what is left of the Republican party.