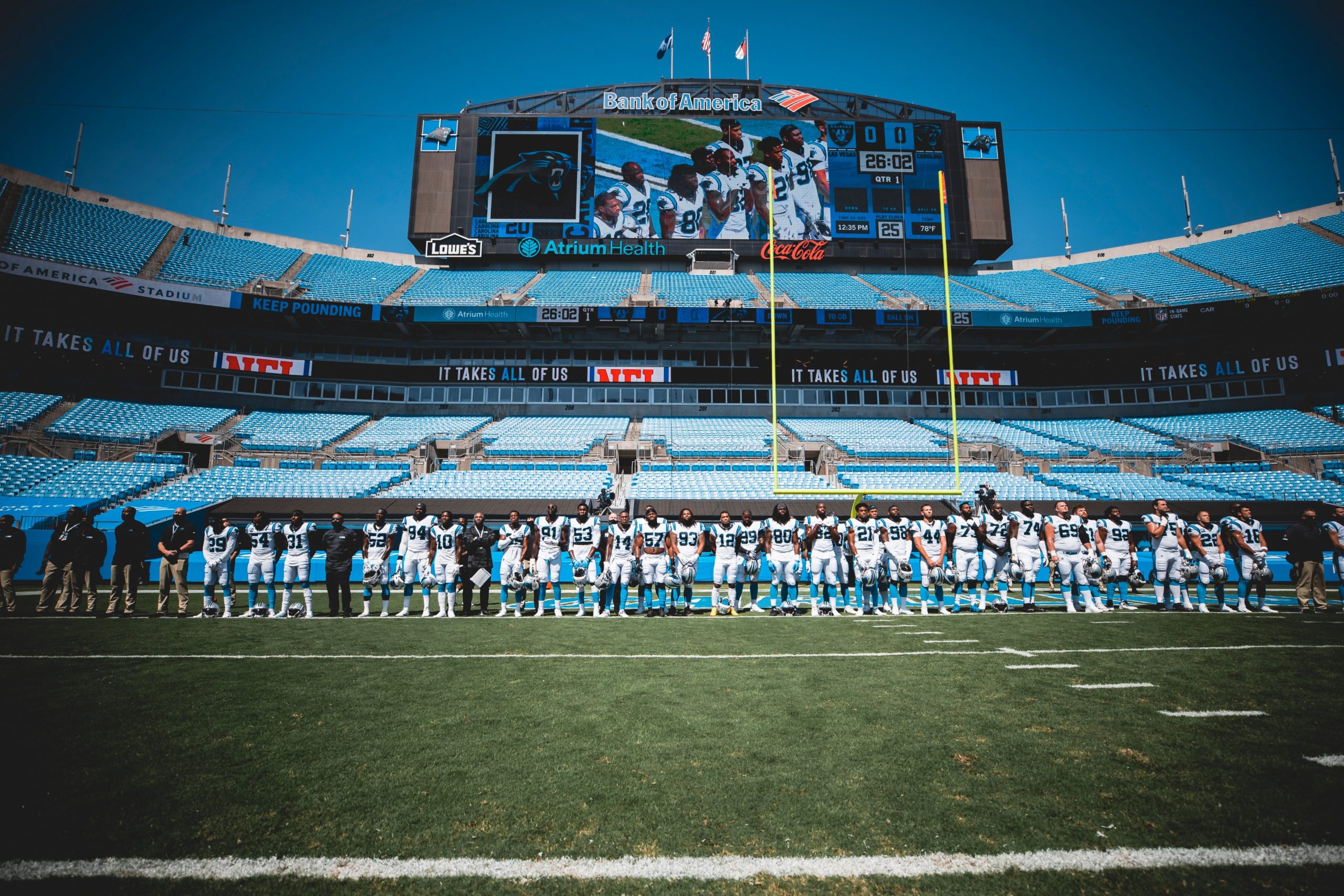 First-year head coach Matt Rhule and the new-look Carolina Panthers are set to take the field against the Las Vegas Raiders on Sunday, September 13 at Bank of America stadium in Charlotte, North Carolina.

The Panthers and Raiders kick off at 1:00 p.m. EDT, with the game slated to be televised nationally by CBS.

Despite its listed capacity of 75,523 fans, the Panthers’ home stands will sit empty for the season opener thanks to the ongoing impact of the coronavirus pandemic – a decision the franchise made in accordance with guidance from the N.C Department of Health and Human Services. (NCDHHS).

Carolina hasn’t tasted victory since the ninth week of the National Football League (NFL)’s 2019 season – when they defeated the Tennessee Titans 30-20 at home. Riding an eight-game losing streak into the offseason, the Panthers floundered to the finish line – finishing 5-11 (the program’s worst mark since 2010).

The last time the Panthers made the playoffs was in 2017, a postseason trip that came to an abrupt finish – with Carolina falling to division rival New Orleans 31-26 in a first-round wild card matchup.

It was only four years ago when the Panthers were set to take the field in Super Bowl 50 with a chance to win the franchise’s first championship at Levi’s Stadium in Santa Clara, California.

Since falling to Peyton Manning and the Denver Broncos in that game, the Panthers have posted an abysmal 29-35 overall record. The team’s pathetic performance down the stretch last season sparked a series of changes in the franchise’s front office. The first step was firing Ron Rivera, the 58-year old Fort Ord, California native and 13-year veteran NFL assistant coach who captained the franchise in Charlotte for the past nine years.

Following his departure from his first NFL head coaching job, Rivera inked a deal to lead the Washington franchise.

The Big 12 coach of the year in 2019, Rhule rebuilt the Owls and the Bears during his stops in Philadelphia and Waco, respectively. During his latest stint with Baylor, he led the team to an 11-3 season and a trip to the Sugar Bowl – where they were defeated 26-14 by the Georgia Bulldogs.

By contrast, Baylor went 1-11 in 2017 and 7-6 in 2018 as it rebounded from a sexual assault scandal that resulted in the dismissal of its former head coach and the resignation of the school’s athletics director and president.

Rivera wasn’t the only major face of the franchise to be let go – with Carolina releasing veteran quarterback Cam Newton on March 24.

The 6-foot-5, 245-pound former Auburn Tigers’ star led the Panthers to three NFC South titles and four playoff appearances during his nine years in Charlotte. However, he never quite managed to push the team over the edge and was plagued by injuries – including a foot injury that cost him all but two games of the 2019 campaign.

In addition to winning Rookie of the Year (2011) and MVP (2015) awards during his tenure with the Panthers, Newton was credited for his humanitarian activism and community awareness – being nominated for the NFL’s Walter Payton Man of the Year Award last year and raising $5 million for the community since 2012.

Given Newton’s status as a fan favorite, the Panthers’ decision to part ways with him was viewed as controversial – but injuries and salary cap space were primary concerns. Another Panthers mainstay, tight end Greg Olsen, was also released.

Newton has since signed a one-year deal with the New England Patriots – who are entering their first season in two decades without six-time Super Bowl champion Tom Brady, who signed in the offseason with the Tampa Bay Buccaneers.

As an assistant, Rhule coached quarterbacks, offensive line, tight ends, and was offensive coordinator. With a new offensive scheme, what should Carolina fans expect during his first season at the helm?

“Rhule believes in physicality in controlling football games, ideally with the running game,” noted Brad Kelly for Cover 1. “His teams are generally on the aggressive side. Looking into Baylor’s scheme this past season, there was a lot that could be translatable to the pro level, which means concepts we’re likely to see being run in Carolina moving forward.”

With Newton gone, all-purpose running back Christian McCaffrey is the undisputed face of the franchise moving forward. The 5-foot-11, 205 pound Stanford University graduate has amassed 2,920 rushing yards and 24 touchdowns while averaging 4.7 yards per attempt in three seasons with Carolina.

McAffrey’s success on the ground and through the air (2,523 receiving yards and fifteen touchdowns for his career) prompted the franchise to open the saddle bags – inking him to a four-year, $64 million deal in the offseason.

“The Panthers gave him big money to lure him from LSU,” Athlon Sports noted in its 2020 preview of the team. “Brady loved to get five guys out into the pass pattern in college, and his creativity will be fun to watch this season as the Panthers are giving him a blank slate.”

Carolina will utilize the past player-coach relationships of Rhule and Brady on offense.

The Panthers’ second-string quarterback – 5-foot-11, 212-pound P.J. Walker, was the face of the XFL spring football league. The gunslinger put up huge numbers for the Houston Roughnecks before the league temporarily folded after five weeks of play.

Carolina’s top receiving target remains D.J Moore, who amassed 1,175 receiving yards and four touchdowns in 2019. The 6-foot-0, 210-pound Philadelphia native will be complimented by Robby Anderson, one of the team’s most expensive free agent signees during the offseason.

Anderson starred for Rhule during his collegiate career at Temple. The 6-foot-3, 190-pound standout from Fairlawn, New Jersey recorded 3,059 yards as a wide receiver for the New York Jets from 2016-2019. Like Walker, he is another disciple of Rhule.

“He guided me when I was off the track and needed guidance,” Anderson told Panthers Wire recently. “He never gave up on me.”

In addition to Rhule’s relationships with Walker and Anderson, Brady crossed paths with Bridgewater as an offensive assistant at New Orleans from 2017-2018.

Defensively, the Panthers will initiate a 4-3 base under new coordinator Phil Snow, who made the 972-mile trek from Waco to Charlotte with Rhule.

Carolina is largely a mystery on defense heading into today’s opener. The Panthers rush defense was not only pathetic in 2019, but ranked among the worst in recent history. Giving up 31 touchdowns, it was the least effective unit in this category since the 2008 Detroit Lions – who went 0-16.

Kawann Short returns from injury this season, and the 6-foot-3, 315-pound eighth-year player out of Purdue will be assisted by Panthers’ top draft pick Derrick Brown – who is expected to start alongside him on the interior of the line.

Franchise legend Luke Kuechly – a seven-time Pro Bowler – retired after last season, and his absence will leave an enormous hole at linebacker.

Carolina faces the sixth-toughest schedule in the league and plenty of uncertainties, but the future could still be bright in Charlotte.

“What hope there is must lie in new head coach Matt Rhule and how much he can inspire his young group of players,” noted Tim Weaver of Panthers Wire. “Talent wins championships, but having players who buy into a coach’s system and having faith in him personally counts for a lot.”

Pundits have set low expectations for Carolina in 2020, but with a new offensive scheme and a program-changing college coach who is known to motivate players, don’t be surprised if those expectations are exceeded.