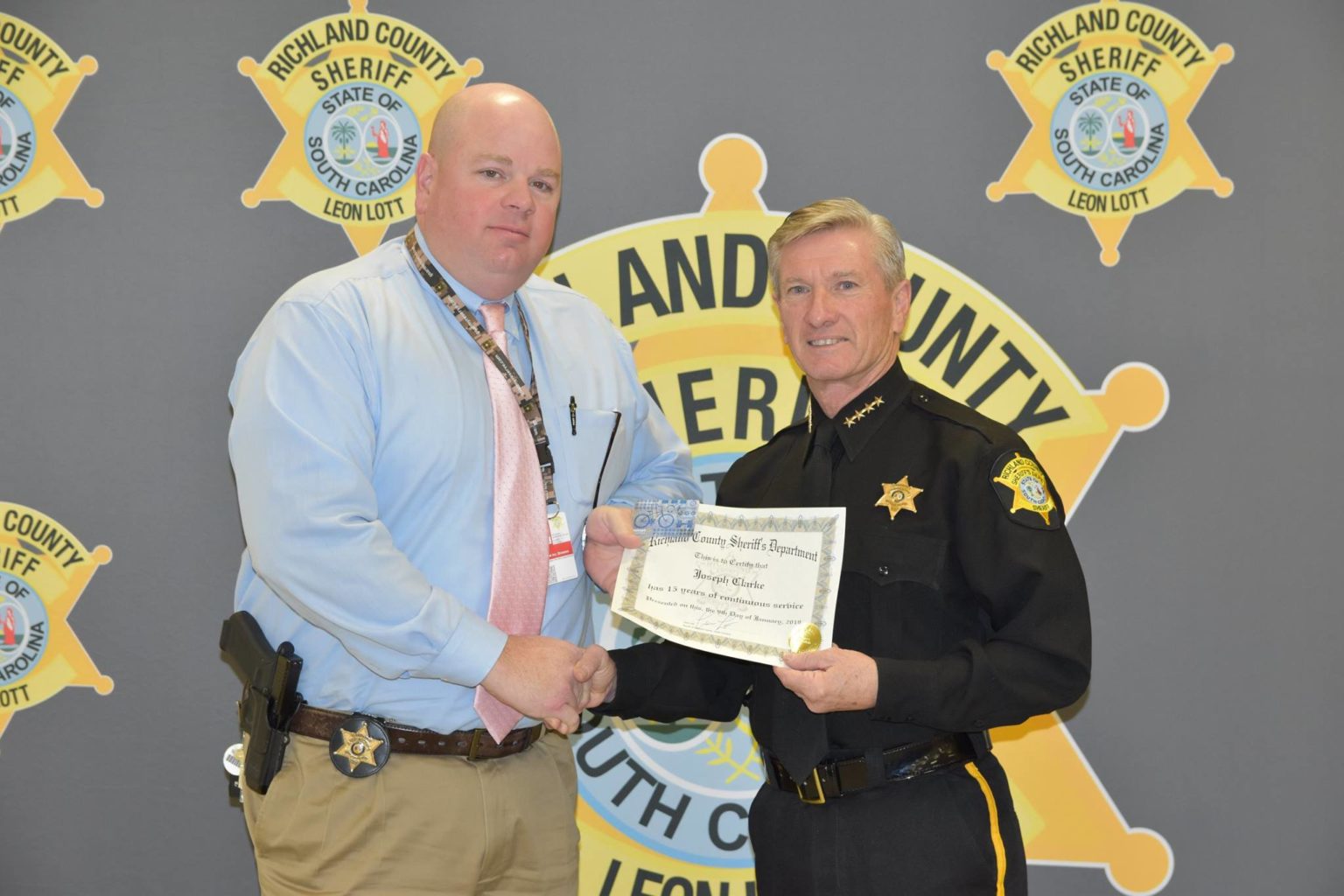 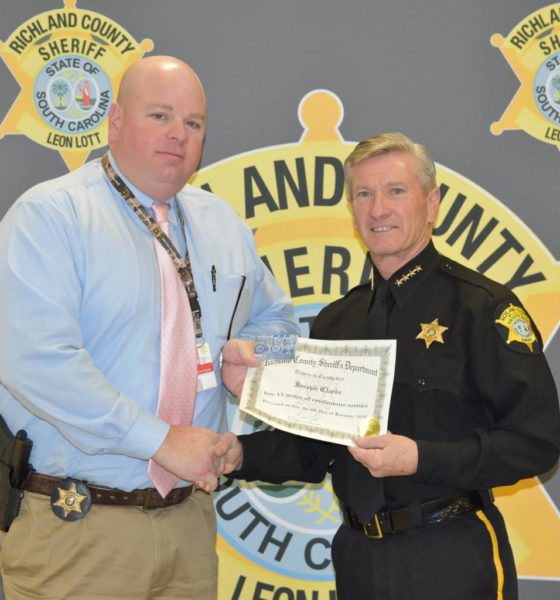 In a civil lawsuit, attorneys representing two black Richland County, South Carolina men argue there is new evidence in the case showing that the deputy who coerced them into confessing to a rape in 2015 was racially motivated.

Specifically, Richland County deputy Joseph “Joe” Clarke exchanged racist text messages with former deputy Benjamin Fields, who made national news in 2015 for violently apprehending a black female student at school, according to an affidavit filed Tuesday in the ongoing lawsuit we extensively covered in July.

In the latest filing, English and Powell’s attorneys argue that the text messages are evidence of Clarke’s racial bias, proving that he has credibility issues as a witness in the case. Clarke was the main investigator in the case and is accused of coercing both teens into signing confessions after interrogating them separately for hours without a parent or a lawyer present, according to the lawsuit.

Anderson, South Carolina attorneys Kyle J. White and Andrew Delaney are representing both Powell and English in the case.

The new evidence in the case comes from attorney Aleksandra Chauhan, whose casework mostly focuses on defending juveniles, according to her signed affidavit filed Tuesday.

Chauhan said she knew Clarke’s girlfriend Nikki Williams, a Richland County Sheriff’s Office employee, for five years through work. It is not clear in the affadavit if Williams and Clarke are still together.

At some point in their relationship, Williams had permission to look at Clarke’s phone and found text messages “between Clarke and former Richland County Sheriff’s Deputy Benjamin Fields, which contained horrific racist language including the word “n****r” and other racist words and phrases,” the affidavit said. “Nikki saved these texts.”

If you don’t remember Fields, here’s a video of the incident at Spring Valley High School that cost him his job.

Fields later sued the Richland County Sheriff’s Department for ruining his reputation and acting too quickly because the student in the video was black and he was white. It appears that case is still ongoing.

This summer, filmmaker Garrett Zevgetis has been working on a documentary called “Disturbing Schools,” which focuses on the incident at Spring Valley High School and the story surrounding it. Chauhan assisted with the film and helped Zevgetis gather sources, the affidavit said.

Chauhan connected Williams with the filmmaker after seeing the racist texts between the police officers. Williams then agreed to do an interview about the texts on June 13.

After seeing news coverage of the rape case in August, Chauhan contacted English and Powell’s attorney Kyle White and told him about the text messages. She also put him in touch with the filmmaker, who has copies of the texts.

According to the affidavit, Williams recanted her description of the underlying circumstances surrounding the texts, but Chauhan maintains that she “knows Nikki” and “perceived her to be telling the truth” when she initially told her about the texts.

English and Powell’s attorneys are working on obtaining copies of the text with a subpoena.

“…but the testimony of Aleksandra Chauhan alone is disturbing and compelling evidence of Clarke’s racial bias that should be considered by the Court in deciding the outcome of the summary judgment motion,” the attorneys argued in the memorandum in opposition to the sheriff department’s motion for summary judgement.

In August 2015, English and Powell were arrested in the rape of a Columbia, South Carolina woman after being individually interrogated for hours without a lawyer or a parent present, according to court records.

They both said they were coerced into signing confession documents by Clarke, according to affidavits.

Neither of the interrogations were recorded or filmed — in an investigation criminal justice expert Melvin Tucker called “shoddy, incomplete, and biased.”

English and Powell were charged on August 5, 2015 with first-degree criminal sexual assault and first-degree burglary. At the age of 16, Kewon English was jailed for 10 months from August 2015 to June 2016, then again briefly in December 2016 for violating bond provisions.

Both men remained behind bars even after DNA results linked the crime to another person – Marquise Randolph – who was eventually charged in April of 2016.

Joe Clarke played a central role in this case. He was the only officer present during the alleged coerced confessions.

With no physical evidence to pin on them, the case against Powell and English relied entirely on their confessions. And with no audio or video recording of the interviews, it was their word against Clarke’s.

Who is Joe Clarke

Joseph Clarke has been employed with the Richland County Sheriff’s Department for nearly 17 years.

He was a senior investigator with the Special Victims Unit (SVU) at the time of this incident and was eventually promoted to Sergeant Supervisor of the SVU. Clarke still works at the Richland County Sheriff’s Department today as a sergeant.

Clarke has a checkered past in his 17 years with the sheriff’s department — and attorneys argue in the most recent motion that the internal affairs (IA) file provided in the lawsuit was incomplete.

According to Clarke’s internal affairs file, the veteran deputy has a “history of alleged and sustained misconduct,” the memorandum by English and Powell’s attorney states. These incidents include:

The IA file didn’t mention the alleged racist text messages. Attorneys for the plaintiffs also found that Fields and Clarke were codefendents in a 2015 case alleging false arrest and excessive force.

In the 2005 case, the court found ““evidence from which a jury could conclude that misstatements and omissions occurred,” and that the deputies made an illegal arrest.

Clarke was never disciplined for this case, and his IA file didn’t mention it.

“Accordingly, this calls into question the completeness of Clarke’s internal affairs file, and is strong evidence of negligence and gross negligence in the supervision of Clarke by the (the sheriff’s office),” attorneys for English and Powell wrote in Tuesday’s filing.

According to his deposition, Clarke maintains that he did no wrong in the 2015 case. Asked if he was sorry that English and Powell were charged and jailed for the crime, Clarke said he wasn’t sorry.

“That’s what I do. If I was a cookie maker, I’d make cookies, I put bad guys in jail,” Clarke told attorneys. “They broke the law multiple times.”

Santee Cooper Settlement: This Could Be Worse Than Those Infamous SCANA Checks