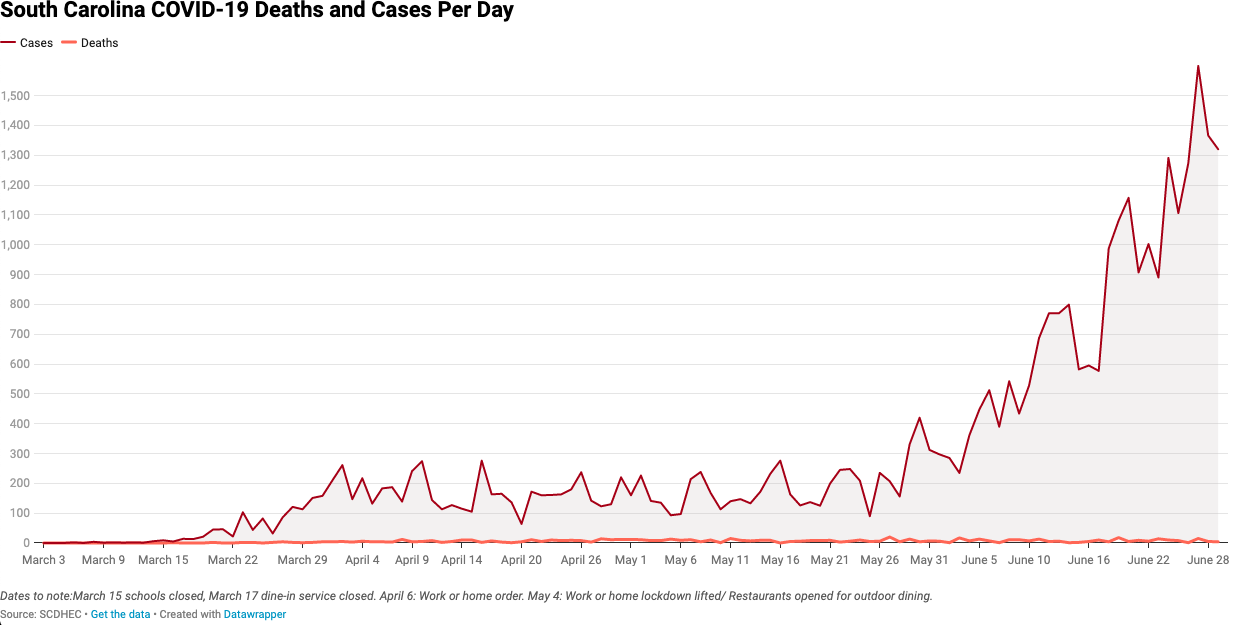 Following yet another record-breaking weekend with nearly 3,000 new COVID-19 cases in South Carolina, state officials reported more than 1,000 coronavirus hospitalizations for the first time in the pandemic on Monday.

On Monday, 1,032 COVID-19 patients were hospitalized across South Carolina, according to the South Carolina Department of Health and Environmental Control (SCDHEC). This is the highest number reported since the state began tracking the metric in early May.

Just one week ago, South Carolina reported 731 hospitalizations. One month ago, 399 were hospitalized from the virus.

“As of this morning, 3,169 inpatient hospital beds are available and 7,336 are in use, which is a 69.83 percent statewide hospital bed utilization rate. Of the 7,336 inpatient beds currently used, 1,032 are occupied by patients who have either tested positive or are under investigation for COVID-19,” SCDHEC said.

South Carolina officials said Friday that there is a plan to make room for more hospital beds that will go into effect when the state reaches an 80-percent occupancy rate.

So far in the pandemic, 87 percent of those who tested positive for coronavirus in South Carolina did not require hospitalization at the time of illness, according to SCDHEC.

South Carolina was one of the last states to issue a stay at home order and among the first states to lift COVID-19 lockdowns and open businesses, beginning on May 4.

Now, South Carolina is among a few states leading the nation in new cases per capita.

The recent surge is not due to the state’s expanded testing efforts. According to the COVID Tracking Project, South Carolina ranks 36th in the U.S. for tests per capita.

The percentage of positive case per test also been moving upward, another alarming sign that COVID-19 isn’t anywhere near contained in the Palmetto State.

According to SCDHEC, 15.5 percent of the latest round of tests came back positive. Last month, that number was around 5 percent.

On Monday, SCDHEC reported a total of 1,320 new cases and 4 confirmed deaths.

Here’s a look of the daily case and death counts since early March.

More than 65 percent of COVD-related deaths were among those over 71 years old in South Carolina.

The recovery rate for those who have tested positive for coronavirus in South Carolina is 80 percent.