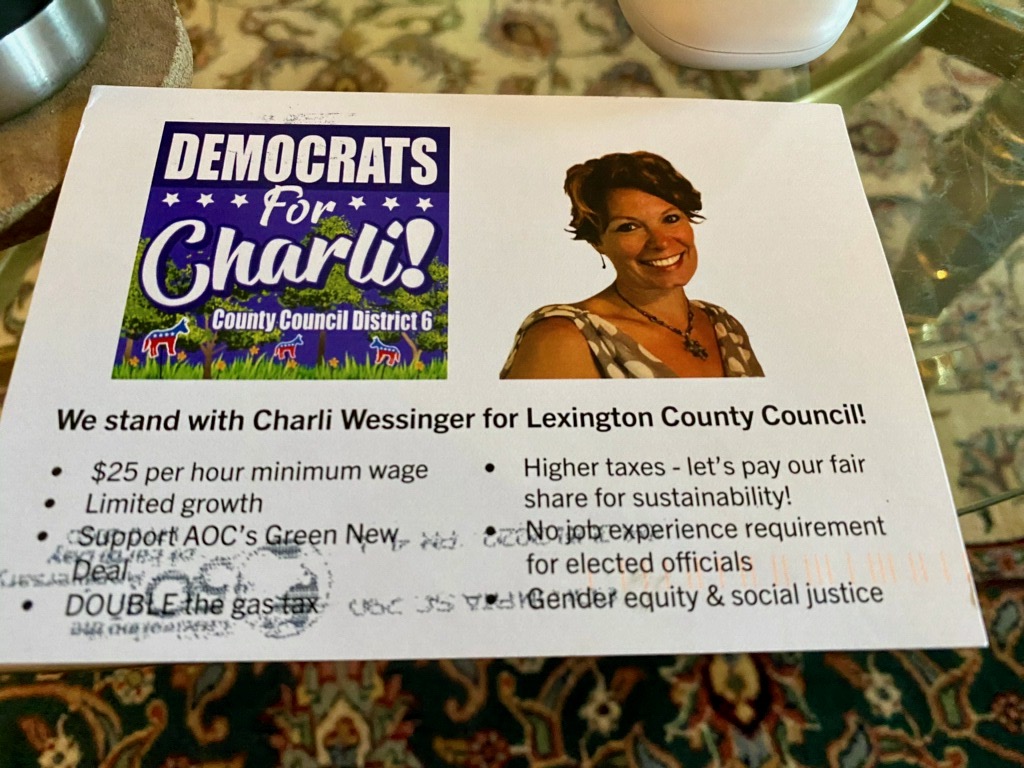 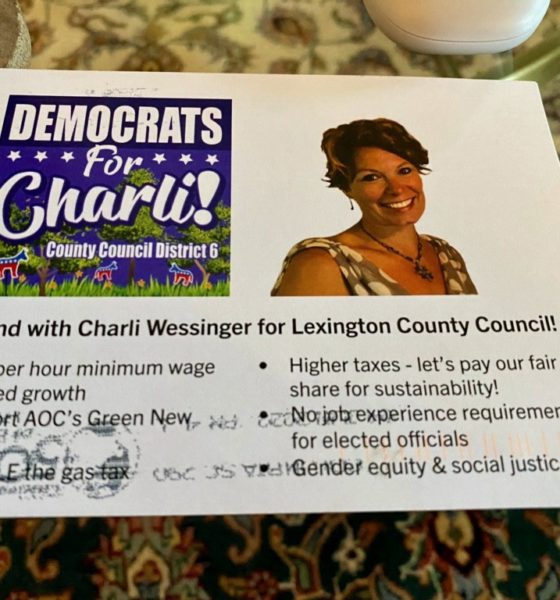 Who is behind this political hit?

Mere days before voters go to the polls, Lexington county, South Carolina council candidate Charli Wessinger – a Republican – was hit with a fake mailing which touted her alleged support for a variety of liberal policy positions. The mailing – which was sent to GOP primary voters in the county’s sixth district – was accompanied by yard signs from the fictitious group, “Democrats for Charli.”

Wessinger does not support any of the positions outlined on the post card. Not only that, a local Democratic group disavowed the mailing.

“We do not now, nor have we ever endorsed Republicans in their primaries,” a statement from the Lexington county Democratic party affirmed. “These mailers did not come from us.”

Where did they come from?

There is no “paid for” designation on the campaign mailing (which is a violation of state law). Meanwhile, the return address listed on the post card belongs to the Publix supermarket in Chapin, S.C.

It’s a fake, in other words … and seeing as former Lexington county council chairman Johnny Jeffcoat is Wessinger’s only opponent in this race (no other Republicans or Democrats filed), it is not too hard to identify the likely source of the attack.

“This was a desperate attempt to discredit Charli’s values and to mislead and manipulate voters with false information,” a statement from Wessinger’s campaign noted. “Actions like these erode the sanctity of the election process and perpetuate a distrust of the political process among citizens.”

Jeffcoat is a heavy favorite to win back this seat when voters go to the polls tomorrow (Tuesday, June 9, 2020). Previously, he spent two decades on county council – including several years as chairman – prior to stepping down in 2016.

So why would Jeffcoat (or his supporters) feel the need to engage in underhanded tactics such as this?

As this race has reached its homestretch, Jeffcoat has come under fire on multiple fronts. Last week, this news outlet ran an article questioning property tax designations claimed by Jeffcoat’s now-deceased wife which may have provided the former councilman with an improper benefit.

The following day, Isabella Cueto of The (Columbia, S.C.) State newspaper filed a lengthy report detailing one of the taxpayer-funded “economic development” disasters that was spearheaded by Jeffcoat.

According to Cueto, more than $16 million was pumped into the Chapin Business and Technology Park at Brighton over the past decade – but as of this writing its 200-acre property sits empty, off the tax rolls and has created no jobs.

Jeffcoat, incidentally, is paid nearly $100,000 a year by Lexington, S.C. to serve as an economic development “catalyst.”

As we noted in our coverage, we are concerned that Jeffcoat – who calls himself a “proven conservative” – is in reality “another big government crony capitalist looking to take advantage of the system for his own personal benefit.”

Which would make him par for the course in the Palmetto State, sadly.

For the past three-and-a-half years, this seat has been held by Erin Long Bergeson – a certified public accountant and one of the few legitimately pro-taxpayer elected officials in local government in the Palmetto State.

Bergeson originally supported Jeffcoat, but after uncovering the Chapin business park scam she has cut ties with him and endorsed Wessinger’s campaign.

Jeffcoat’s campaign denied any involvement with the mailing attacking Wessinger, incidentally. And as for the report by Cueto, a source close to the Jeffcoat campaign told us it was a “hit piece.”

Stay tuned … this is one of many local elections we plan on following closely tomorrow evening as partisan primary results start pouring in from across the state after shortly polls close at 7:00 p.m. EDT.

Report: South Carolina Is The ‘Most Liberal Red State In The Country’