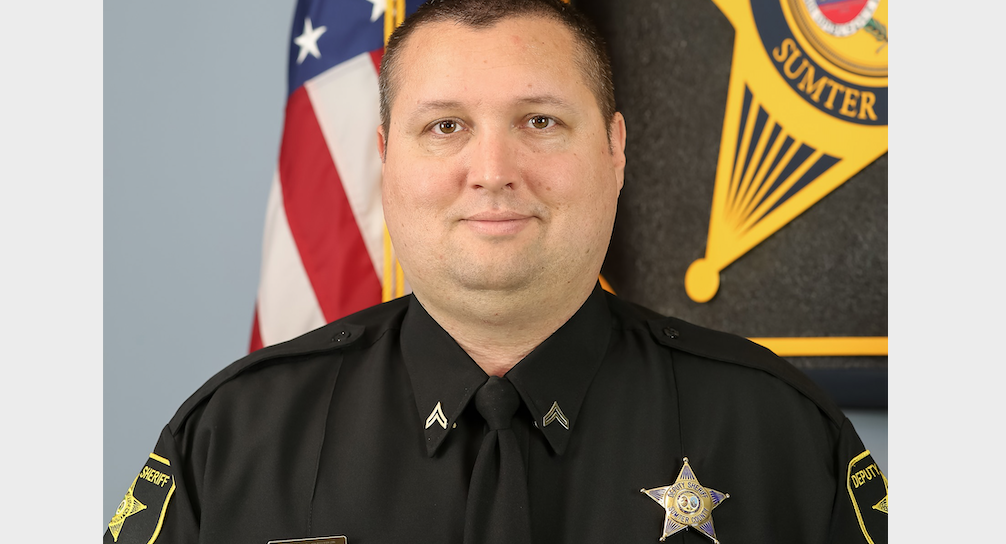 A Sumter County Sheriff’s Office deputy died after sustaining wounds in the line of duty while serving a detention order and eviction notice earlier Tuesday afternoon, according to officials.

“It is with broken hearts and with profound sadness that we announce that our brother, Cpl. Andrew Gillette, died of wounds suffered in the line of duty earlier today, Feb. 25,” Sumter County officials said on Facebook.

Gillette was shot in the chest while responding to a home near 3120 Thomas Sumter Highway (U.S. Route 521) near Dalzell, S.C. – a town of around 2,000 located just north of Sumter, S.C. The suspect fired multiple rounds at deputies, sheriff’s officials said.

According to reporter Kayla Green of The (Sumter, S.C.) Item, the incident took place at around 11:30 a.m. EST on Tuesday morning.

Gillette was the only officer injured in the shooting. He was taken to the hospital where he was pronounced dead.

“Our deepest condolences and our prayers are with his family, especially his wife and son,” the sheriff’s office said. “We ask that you all keep Cpl. Gillette’s family and our entire Sumter County Sheriff’s Office family in your prayers.”

The shooting led deputies to shut down both the northbound and southbound lanes of Route 521 on Tuesday afternoon as a massive police presence descended upon the area.

SLED investigates officer-involved shootings as a matter of protocol in the vast majority of local law enforcement jurisdictions in the Palmetto State. However, there are exceptions.

Legislation aimed at formalizing SLED’s statewide role in investigating officer-involved shootings has been introduced by S.C. senator Gerald Malloy, however Richland County, S.C. sheriff Leon Lott – one of the only local law enforcement leaders whose agency investigates its own officer-involved shootings – has organized resistance to the bill by the S.C. Sheriffs Association.

There were a total of 45 officer-involved shootings in South Carolina last year, four shy of the record of 49 set in 2017.

This was the seventh officer-involved shooting so far this year.

Got something you’d like to say in response to one of our stories? We have an open microphone! Please feel free to submit your own guest column or letter to the editor via-email HERE. Got a tip for us? CLICK HERE. Got a technical question or a glitch to report? CLICK HERE. Want to support what we’re doing? SUBSCRIBE HERE.
Banner: Sumter County Sheriff’s Office
Related Topics:Anthony DennisFeaturedKayla GreenS.C. State Law Enforcement DivisionSheriff Anthony DennisSLEDSumter County SheriffThe Sumter Item
Up Next