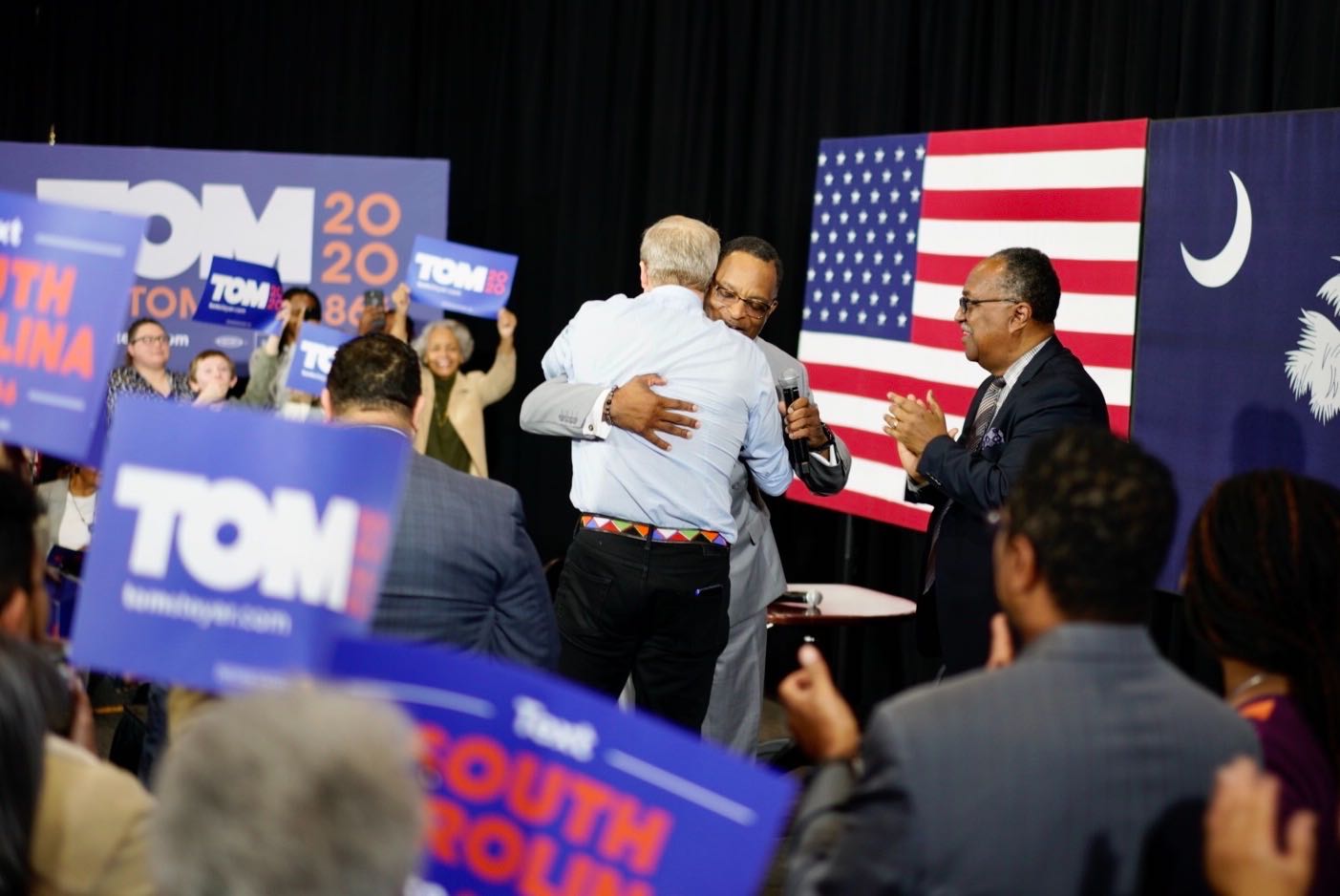 There was a huge “nontroversy” in South Carolina earlier this month when state senator Dick Harpootlian criticized Jerry Govan – leader of the S.C. Legislative Black Caucus (SCLBC) – for throwing his support behind liberal billionaire Tom Steyer, who is paying Govan tens of thousands of dollars per month to be his senior campaign advisor.

Biden may yet win the Palmetto State … but his double-digit lead has evaporated (along with his once wide-open pathway to the Democratic nomination). And it is very telling the 77-year-old establishment Democrat is now tempering expectations in his conversations with the media, telling Chuck Todd of NBC that he merely needs to “do really well” in South Carolina to keep his candidacy afloat.

The prime beneficiary of Biden’s collapse? Steyer, who has been soaring in South Carolina polls the more black support he purchases … errr, picks up.

Seriously, though, how brazen is Steyer’s attempted buying of the black vote in South Carolina?

Not since fictitious sports agent Jerry Maguire screamed “I am Mr. Black People!” has anyone been less subtle in their pandering.

It isn’t just the institutional support he is buying up, either, it is Steyer’s coordinated bombardment of internet ads, television commercials, digital highway billboards and other campaign propaganda all showing him “relating” to black voters … as if their concerns will matter one iota to him after the votes are counted on February 29.

The whole thing is as nauseatingly transparent … and yet Harpootlian is being attacked for raising the issue?

After Harpootlian (above) called a spade a spade (no racial overtones intended), to borrow the old expression from Casablanca, everyone – including Steyer – was “shocked, shocked to find that gambling is going on in here.”

They piled on the politician with feigned politically correct indignation, calling him (and by extension Biden) racist.

Harpootlian was right, though … and his assessment of the situation was further vindicated by a recent report from Emily Wakeman of WIS TV 10 (NBC – Columbia, S.C.).

According to Wakeman, during Sunday’s services as Brookland Baptist Church in West Columbia, S.C., pastor Charles B. Jackson, Sr. told congregants that his church was applying for a grant from Steyer’s foundation.

“The money would go toward renovations at the Lakeview Empowerment Center, which the church runs,” Wakeman reported. “The center runs after school programs as well as athletic programs for kids in the community. The announcement sparked strong reaction with some criticizing that it’s a way to buy votes.”

“Tom Steyer just happened to land on a love for South Carolina black churches two weeks before he’s on the ballot in South Carolina,” one Republican operative told us, dismissively.

Indeed … the teasing of such “community investments” from Steyer’s foundation are every bit as brazen as the payments made to the black politicians endorsing Steyer’s presidential bid.

God forbid anyone call it what it is, though …

To wit: City of Columbia, S.C. councilwoman Tameika Isaac Devine (above) – who seems to have her fingers in all sorts of pots within the Midlands region of the Palmetto State – found absolutely nothing wrong with this shamelessly self-serving sop. Not only that, she spearheaded the feigned outrage against those who dared to speak up against it.

“I think it’s unfortunate that people look at this in terms of the elections and feel like there is some motive behind it,” she told Wakeman.

We hate to break it to Devine but there most assuredly is some motive behind it.

More importantly, what is truly “unfortunate” about this situation is the ongoing trend of black religious and political leaders in South Carolina selling out their communities.

Whether it is failing bureaucracies, corrupt local governments (including several in Richland county) or ideologically bankrupt liberal vanity projects (like Steyer’s presidential campaign) … black leaders in South Carolina continue putting their own interests over the interests of the people they are purportedly “leading.”

And they are doing it for money …

Is it their prerogative to do so? Absolutely. They just shouldn’t be “shocked, shocked” when people call them out for it.

Which reminds us: Props to Harpootlian for (once again) having the courage to call it like it is, and props to local reporters like Wakeman for bucking the trend of media complacency/ fear and actually exploring this issue in depth. Such coverage is rare and indeed considered almost provocative these days, and she and her station managers are to be commended for it.

As for Devine and the rest of the politically correct “indignant-ocracy,” we would humbly suggest they give the faux incredulousness a break and go to work on behalf of their constituents for once rather than seizing upon any and every opportunity to pad their own pockets at the expense of those constitutuents.