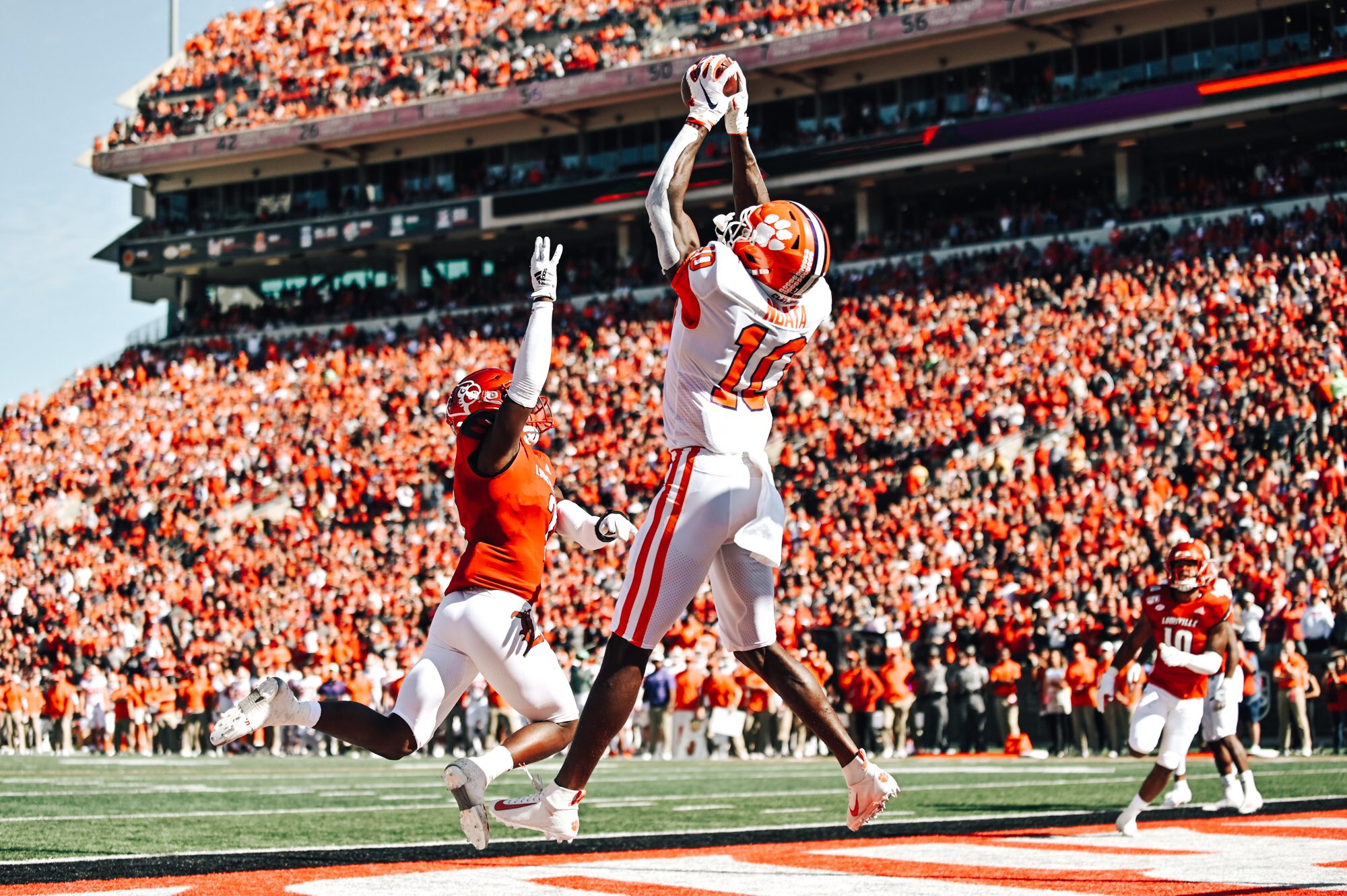 Make no mistake: Clemson University’s football program has lost much of its luster with college football’s punditry – and with pollsters. And in the early stages of Saturday’s road win against unranked Louisville it appeared as though the critics were right. But the defending national champions shrugged off a slow start to showcase their next-level talent – and serve notice that they belong in the College Football Playoff (CFP) for a fifth consecutive season.

The CFP is exactly where Clemson will be, too, assuming the Tigers (7-0, 5-0) run the table against a slate of weak ACC teams, win their rivalry game and claim their fifth consecutive conference championship …

Nothing less will suffice, it would appear … especially after the Tigers fell to No. 4 in the latest Associated Press Top 25 poll.

After surrendering their No. 1 ranking to Alabama following a near-loss against unranked North Carolina last month, Clemson has since been leapfrogged in the polls by LSU and (most recently) Ohio State.

A big issue? Uneven play at quarterback … a trend which continued on Saturday at Cardinal Stadium in Louisville, Kentucky.

After throwing interceptions on back-to-back possessions in the first quarter, Clemson quarterback Trevor Lawrence turned things around against the outmatched Cardinals – throwing for three touchdowns the rest of the game as he leveraged the size, speed and vertical prowess of his NFL-caliber receiving corps.

The 35-10 win over Louisville extended the Tigers’ current winning streak to a school record 22 games – which remains the longest active streak in college football. But Clemson will have to continue refining its game on offense if it hopes to repeat as national champions (and claim its third title in four years come January).

Perhaps. But while there are plenty of weapons at his disposal, Lawrence – a preseason Heisman Trophy candidate – has struggled to recapture the magic of his freshman campaign so far this year. In fact, the 6-foot-6, 230-pound native of Cartersville, Georgia is currently the ACC leader in interceptions – throwing eight picks through his first seven games.

That probably bears repeating: Trevor Lawrence is the ACC leader in interceptions.

By contrast, Lawrence threw only four interceptions in fifteen games (including eleven starts) last season – one of many metrics indicative of a dreaded “sophomore slump.”

In addition to his soaring interception count, Lawrence has seen his touchdown production, passer rating and pass efficiency numbers decline – although he has demonstrated greater mobility and is putting up better numbers in the ground game.

Still, his performance has drawn criticism – even on “good” plays. After connecting on a 25-yard touchdown pass to Ross prior to halftime against Louisville, ESPN analyst Dan Orlovsky panned Lawrence’s play – arguing the throw was a “mistake” and “could have easily been picked off.”

Orlovsky credited Ross with bailing out his quarterback.

“I’m still going to try to make all the throws even though I had made two really bad plays,” Lawrence said after the game. “The guys were confident in me and had my back.”

Truth be told, it wasn’t Lawrence’s receivers who bailed him out against the Cardinals – it was junior tailback Travis Etienne. After being held under 100 yards rushing for four straight games earlier this season, Etienne has exploded for 319 yards in his last two games – including a 14-carry, 192-yard performance on Saturday.

The 5-foot-10, 210-pound Jennings, Louisiana native now has 781 rushing yards on the season – second-best in the ACC.

Etienne (above) and the Tigers will face the league’s No. 1 rusher this coming Saturday when junior tailback AJ Dillon and the Boston College Eagles enter Death Valley looking to snap Clemson’s streak and dash their playoff hopes. Dillon has struggled against the Tigers in two previous matchups, rushing for a combined 96 yards on 34 carries.

The Eagles (4-3, 2-2 ACC) shredded NC State 45-24 on Saturday, with Dillon amassing a season-high 223 yards and three touchdowns against the Wolfpack.

Kickoff on Saturday is set for 7:30 p.m. EDT with the ACC Network providing national coverage.