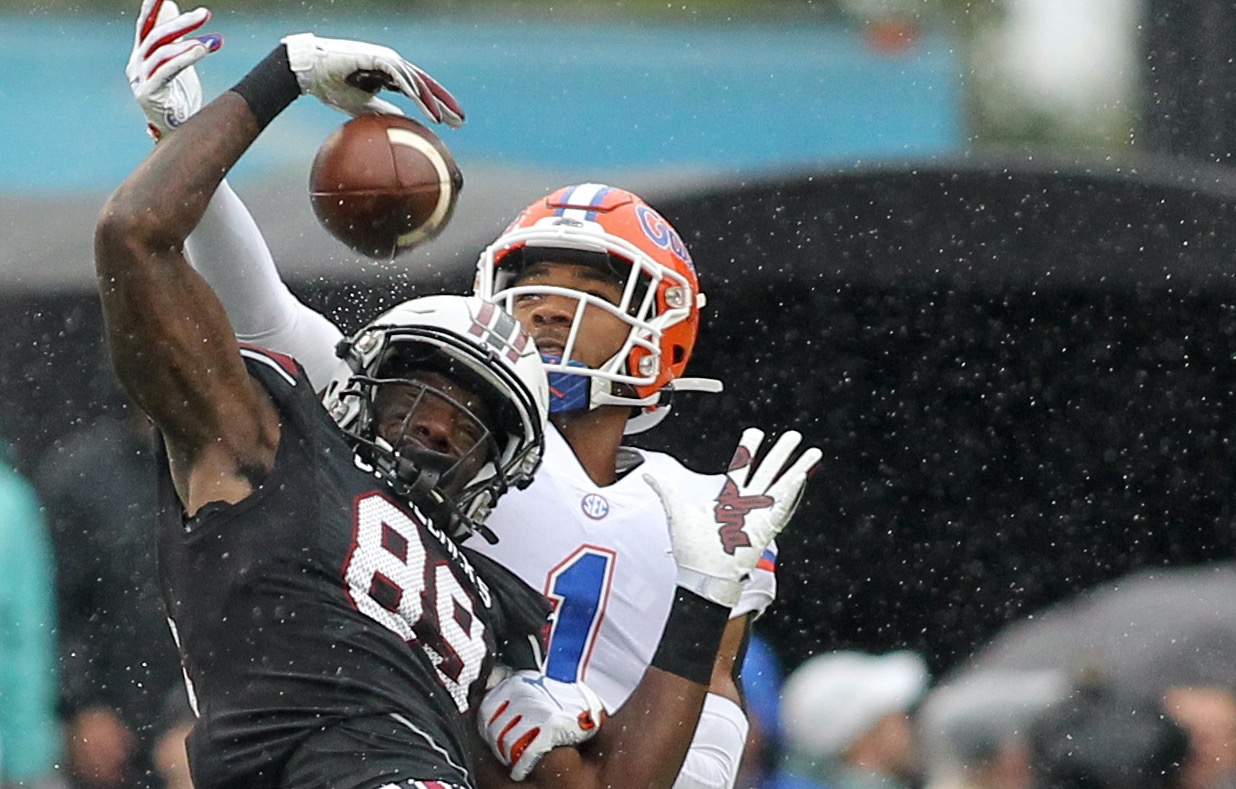 For the second straight season, the University of South Carolina football team coughed up a fourth quarter lead to the Florida Gators – missing out on their chance to defeat top ten teams in consecutive weeks for the first time in school history and extend a surprising midseason turnaround.

Instead, the Gamecocks (3-4, 2-3 SEC) must regroup after a deflating defeat at the hands of the ninth-ranked Gators (7-1, 4-1 SEC) – who bounced back from their first loss of the season a week ago against No. 2/3 LSU.

South Carolina led 20-17 entering the final stanza, but the Gators scored touchdowns on three straight fourth quarter possessions to turn a nip-and-tuck game into a Florida blowout. Sound familiar? Florida scored three unanswered touchdowns late in the second half against the Gamecocks in Gainesville last year – erasing a 31-14 South Carolina lead and turning a Gamecock blowout into a narrow Florida win.

The Gators’ latest victory was not without controversy, however. The Southeastern Conference (SEC) officiating crew failed to throw flags on what appeared to be three obvious penalties on a pair Florida touchdowns in the second half – missed calls that had a significant (and potentially decisive) impact on the outcome of the game.

After the Gamecocks took a 17-10 lead early in the third quarter on a 21-yard touchdown run by senior transfer tailback Tavian Feaster, the Gators answered immediately with a 75-yard touchdown run from tailback Dameon Pearce. However, Florida right tackle Jean DeLance jumped the snap on the play – a clear false start penalty that should have negated the touchdown and cost the Gators five yards.

No flag was thrown on the play, though … either for DeLance’s false start or for a clear hold by Florida receiver Tyrie Cleveland against South Carolina defensive back Israel Mukuamu.

The second missed call on a Gators’ scoring play came midway through the fourth quarter with Florida leading 24-20. On that play, officials missed an glaringly obvious offensive pass interference/ holding penalty on wide receiver Josh Hammond – who set an illegal pick and then held Gamecock defensive back R.J. Roderick on a touchdown pass from quarterback Kyle Trask to Kyle Pitts.

South Carolina head coach Will Muschamp erupted on the sidelines following the second missed call and eventually was flagged for a fifteen-year unsportsmanlike conduct penalty.

The embattled fourth-year Gamecock coach – whose seat got significantly cooler following an upset win on the road against third-ranked Georgia last week – had not won consecutive games against ranked opponents since 2012, his second season as Florida’s head coach.

Muschamp is now 7-25 against ranked foes all-time – including a 2-11 mark at South Carolina. He fell to 1-3 against his old team.

Muschamp referred to the official who threw the unsportsmanlike conduct flag against him as “gutless.” Beyond that, though, he refrained from commenting on the officiating.

Others did not hold their tongues, however …

“A horrendous showing from the stripes,” noted Connor O’Gara for Saturday Down South, adding that the multiple missed calls “were crushing developments” for South Carolina.

“There’s no accountability,” O’Gara added. “And even worse is the fact that the SEC continues to turn a blind eye to this. It’s not just that mistakes are made. It’s that the process is flawed. If this is being taken more seriously than ever with review and in-studio officiating analysts, why can’t we get this right?”

While the terrible officiating cost the Gamecocks dearly, so did its offensive play-calling – particularly as Muschamp’s team had all the momentum on its side in the second half, driving deep into Florida territory with the game tied at 17 apiece.

Playing without senior tailback Rico Dowdle – who left in the first quarter with a leg injury – the Gamecocks were still ramming the ball down Florida’s throat. Feaster (above) and senior Mon Denson accounted for 79 yards on eight straight running plays to put the Gamecocks first-and-goal at the Florida six-yard-line with five minutes left in the third quarter.

Rather than continue hammering away on the ground, though, South Carolina inexplicably called a passing play that resulted in quarterback Ryan Hilinski taking a sack for a loss of nine yards.

The Gamecocks would eventually be forced to settle for a 31-yard field goal from junior placekicker Parker White on that drive.

Hilinski (above) – who missed most of the second half of the Georgia game with a leg injury – struggled mightily against Florida. He finished completing only 17 of 35 passes for 170 yards with one touchdown. Hilinski threw no interceptions, but he lost a fumble at a key moment in the fourth quarter and took three sacks. The 6-foot-3, 230-pound true freshman from Orange, California also badly overthrew open receivers on multiple deep routes – failing to make the sort of big plays necessary to pull off an upset over a top ten team.

South Carolina stayed in the game, though, thanks to Feaster – who amassed a career-high 175 yards on 25 carries (including his fourth rushing touchdown of the season). Denson added 58 yards on 12 carries with a touchdown (his second of the year).

Senior wide receiver Bryan Edwards was the leading receiver for the Gamecocks for the fourth consecutive game, hauling in seven catches for 78 yards.

South Carolina also got another solid performance from its defense … until Florida was able to take advantage of several short field possessions in the fourth quarter, that is.

The Gamecocks travel to Knoxville, Tennessee on Saturday for a pivotal game against the unranked Tennessee Volunteers (2-5, 1-3 SEC). Kickoff from Neyland Stadium is set for 4:00 p.m. EDT with the SEC Network providing coverage. Tennessee lost to top-ranked Alabama 35-13 on Saturday, but held head coach Nick Saban’s team to season-lows in points (35), passing yards (233) and total yards (373). Odds makers have yet to enter a spread for the game, but ESPN’s matchup predictor currently gives South Carolina a 61.2 percent chance of victory. The Gamecocks must win three of their remaining five games to qualify for a bowl at the end of the season.