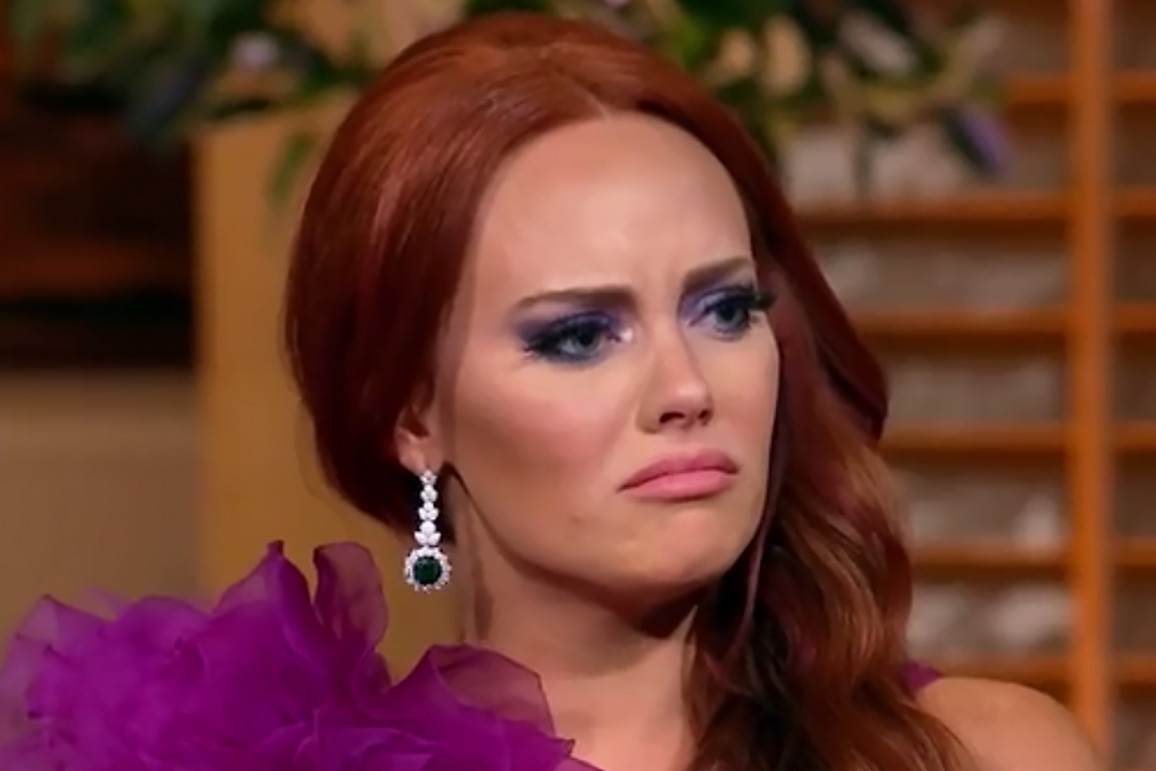 by AMY FEINSTEIN || It’s that time of year again: Reunion season for Bravo TV’s Southern Charm. In the introduction to the first installment, everyone seems agitated. Craig Conover’s pillows are on the sofa. Also, does Bravo buy self-tanner by the keg or what?

Andy Cohen welcomes everyone to the sofa, and as an fyi, Kathryn Calhoun Dennis learned the night before the show taped that her mother was living on borrowed time, but she is managing largely to hold it together.

The opening shot is at the men. The show was originally designed to be about “Southern Gentleman” and the women who flock around them, and yet it has turned into sisters doing it for themselves and the men who day drink. Cohen is reading fan questions/ comments, starting with one about Austen Kroll only dating entrepreneurial women despite not having his own thing going on. There is no real question here, but “Karina from Arkansas” needed to get something off her chest.

In response, Shep Rose gets all metaphysical about all of us being “grains of sand” and how we should all smile (granted this was before insulting a homeless woman later in the evening in NYC and posting the video on Instagram). Andy asks him if that’s what he was doing this season, just smiling?

His answer? “Not necessarily,” but he feels his behavior was in retaliation. Hmmm. I can already tell Shep is going to piss me off.

Once again, Kathryn’s face does not disappoint, as she is a polygraph for the
accuracy of the answers given by others.

Cameran Eubanks talks about motherhood and we get a peek back at her soft-core Real World days (I could have lived without seeing this, as it was more eww than hot).

A viewer writes in to say that Shep shouldn’t be a dog owner as he is the guy who misplaced a short-term girlfriend in a ditch on a bike ride. Fair play, but fortunately for Shep, it’s socially acceptable to put your dog on a leash, and most likely Little Craig has a micro chip. Sadly for Shep, there is no quick clinic to microchip one-nighters (hey, there is a Charleston business idea!). There is something about literally naming your dog after the friend who you think follows you around like a puppy that’s a bit sick.

Andy asks Shep why he didn’t listen to Cam about the flood plain property, and he said because she doesn’t know James Island. Well, son, neither do I, but it didn’t take a genius to tell as you walked through the mud and standing water on a clear day, but what do I know, I’m sure you are always the smartest fella in the room.

Am I the only one noticing a difference in Andy since this mishigas started? Or is it since he became a parent? He used to call Shep “Sheppy,” and he smiled when delivering double entendres. Sheppy is gone and so is the smile.

Now onto talking about the RV trip. A viewer called Shep a bully and not charming, seemingly in a Tom Sawyer painting the fence kind of way. In the clip Austen gives Shep the finger, which should have been the poster for this season.

Shep listens to the criticism and says he’s willing to cop to it, and so they can move on. But they don’t, and he doesn’t like it. He starts talking about his good qualities, but that’s not why we’re here, dude. If you can dish it out, you’d better take it! Andy asks about his thought when watching the womens’ party at Patricia Altschul’s and he said he was angry watching the women speak their truth.

Really? Angry? With all of that education, that’s the best word you came up with?

The upside for Shep is that there is nothing wrong with him that a weekly visit to a shrink for a year or two couldn’t fix, if he was open to it. I find the key is to find a doctor who you accept is smarter than you, and you must surrender to the process. If not, you are wasting everyone’s time.

By the way, for all of you who gave me grief for talking about Shep’s gray hair when Chelsea Meissner was cutting it (I wasn’t mocking gray, I was poking fun at his vanity), note that he is no longer gray at all at the reunion, and his hair looks like “Just For Men” medium brown, yet his beard or scruff is graying.

Next we cover Naomie Olindo and Metul Shah. There seems to be a divide here, between some thinking that he’s the hottest thing since sliced bread, while others are irked by the controlling vibe. Shep asks if it’s cultural, because he’s Indian. Naomie responds that he was born in D.C. Point, Naomie, but I understand what Shep is saying, he was speaking culturally, not about point of origin. Let the WASP jokes begin.

Here is the first mention of Plan B, Ashtray, she who should not be named, but I will leave this up to my intrepid editor. Naomie talks about her meet and drink with former cast member Thomas Ravenel’s girl for hire.

Andy asks why Naomie agreed to meet with Plan B (I was told production made her in exchange for not going on the ski trip). She says it was morbid curiosity.

Andy seems to have little interest in discussing the infamous season five cold sore, and so they move on. Honey, if you think you are getting your own show on Bravo, you are wrong. Keep priming that Bachelor pump, maybe that will work out better for you (though sadly you and your eskimo sister are a bit long in the tooth for that demographic).

Now onto Craig and his Adderall addiction. We all knew this talk was coming. It’s uncomfortable and a bit surreal, as is the detail that he puts on eyeliner each year for Halloween and seemingly lets it wear off. There is a whole industry of thing you use to wipe off eye makeup. It’s sold next to the freaking eyeliner!

This is a segue to talking about how Craig looked at his pillow party, which is best described as Captain Jack Sparrow on a bender. Next, Craig at the oyster roast.

Andy asks Cameran if she thinks Craig is addicted to Adderall, and her answer is yes, 100 percent. Regardless, Craig says he is now two months clean, so congratulations, and keep up the good work. I hope you’ve flushed your reserves.

We are talking about the Kathryn-Whitney Sudler Smith sex thing again, again it’s rehashed again. I have heard from many sources, including the horse’s echo that Whitney didn’t want to discuss it because he didn’t want to be subpoenaed and dragged into the Ravenel shit show. Many of us can relate to that feeling.

Next onto TRex’s accusations per The Daily Mail that Kathryn is a sex, drug, and shopping addict. There is a chat about Kathryn’s appearance on WWHL, which admittedly was awkward. It was obviously not her best evening, and she blames it on anxiety, and yes, perhaps anxiety medication. She said her abuse problem was weed, and she hasn’t gone there since rehab.

The episode ends, but in scenes from next week, Madison LeCroy shows up, and things get uniformly ugly.

See you next week …

Nikki Haley Fires Back At Her Critics