First and foremost, the 56-year-old Charleston, South Carolina native is facing criminal charges in connection with an alleged 2015 sexual assault of Dawn Ledwell – the nanny who previously cared for the two children he fathered with his reality television co-star, Kathryn Calhoun Dennis.

Ledwell has also filed a civil suit against Ravenel and the producers of Bravo TV’s Southern Charm – alleging that the show which made the Lowcountry playboy a national celebrity also enabled and empowered some of his worst behavior.

Then there is Ravenel’s legal drama with his ex …

The toxic relationship between Ravenel and Dennis – who were brought together in 2013 by this news outlet’s founding editor – has formed the basis of Southern Charm’s popularity.  But it has also formed the basis of a caustic custody dispute between the erstwhile lovers – a battle that is currently raging in family court in Charleston County, S.C. 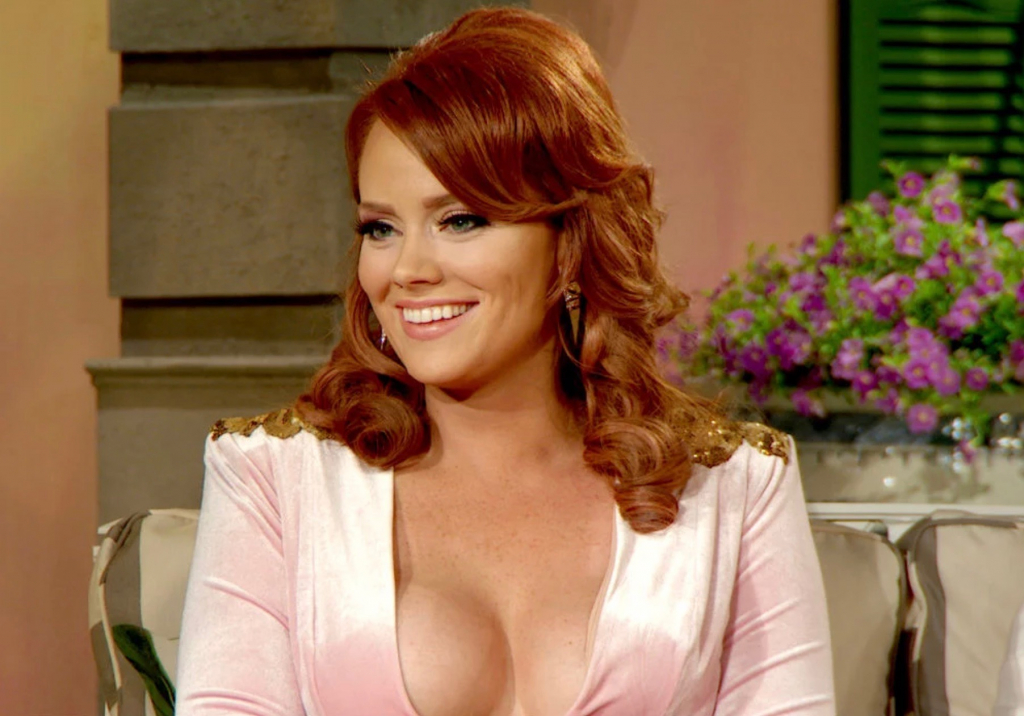 An agreement was reached in this case back in mid-2017, but Ravenel’s latest arrest has prompted Dennis (above) to seek sole custody of the couple’s two children.

In addition to these courtroom dramas, Ravenel has filed his own lawsuit against Bravo TV and Southern Charm’s producers – and is involved in yet another legal action with a California canon lawyer, Luzanne Otte.  According to Otte, Ravenel and his contemporary girlfriend Ashley Jacobs harassed and cyber-stalked her over the course of a year after Otte broke off her relationship with the reality star.

Needless to say, a lot of these legal dramas run together … and developments in one case are often used as leverage in others.

This weekend, Ravenel got some leverage when Florida-based real estate agent/ model Ashley Perkins – a woman whose crusade against him last spring kicked off his #MeToo problems – published a signed affidavit that appeared to solidify her new status as a member of #TeamThomas.

Perkins spent months last year aggressively assailing Ravenel on social media – begging media outlets to look into an alleged sexual assault perpetrated against her mother in December of 2015.  Using social media accounts linked to Perkins’ mother at the time of the alleged assault, this news outlet was able to independently corroborate that she had made the same assault allegations to a Southern Charm cast member in 2015 – prompting us to publish the exclusive report that kicked off all of this drama last April.

Perkins also went on the record with us and multiple other media outlets, claiming to have been present at a mediation hearing at the Belmond Charleston Place Hotel in June of 2016 in which Ravenel settled a sexual assault allegation with her mother for $200,000.

What a long, strange trip it has been since then …

Ravenel has steadfastly denied ever assaulting Perkins’ mother.  Similarly, he has denied assaulting Ledwell – who credited Perkins’ advocacy as the inspiration behind her decision to break a three-year silence and come forward with the truth about what Ravenel allegedly did to her.

Five months ago, though, Perkins inexplicably “flipped” – coming out against Ledwell less than forty-eight hours Ravenel’s arrest.  In a tweet that dropped jaws across the country, Perkins claimed that the version of events Ledwell provided to authorities bore “no resemblance” to the narrative Ledwell provided her – and that she had “informed the police (and Ravenel’s) attorneys” of the alleged discrepancies.

We were among those flabbergasted by Perkins’ 180-degree turn … duly noting our incredulity at the fact she would be “sharing information with attorneys who represent the man she accused of raping her mother.”

Perkins is doubling down, though, stating her intention to turn over electronic records of conversations and social media exchanges between herself and Ledwell, Otte, reality podcaster Erin Leah Martin and Southern Charm grand dame Patricia Altschul.

The goal of these disclosures?  It is not immediately clear, although this news site was recently warned that Ravenel was relying on information obtained from Perkins as some sort of “smoking gun” in the context of a vast, multi-layered conspiracy against him – and that exposing this conspiracy was the key to extricating himself from his current criminal proceedings.

According to a tweeted copy of Perkins’ signed affidavit, she has allowed a Miami-based forensics firm – E-Forensics, Inc. – “to make forensic extractions of text and Twitter communications between myself, Dawn Ledwell, Luzanne Otte, Erin Leah Martin and Patricia Altschul.” 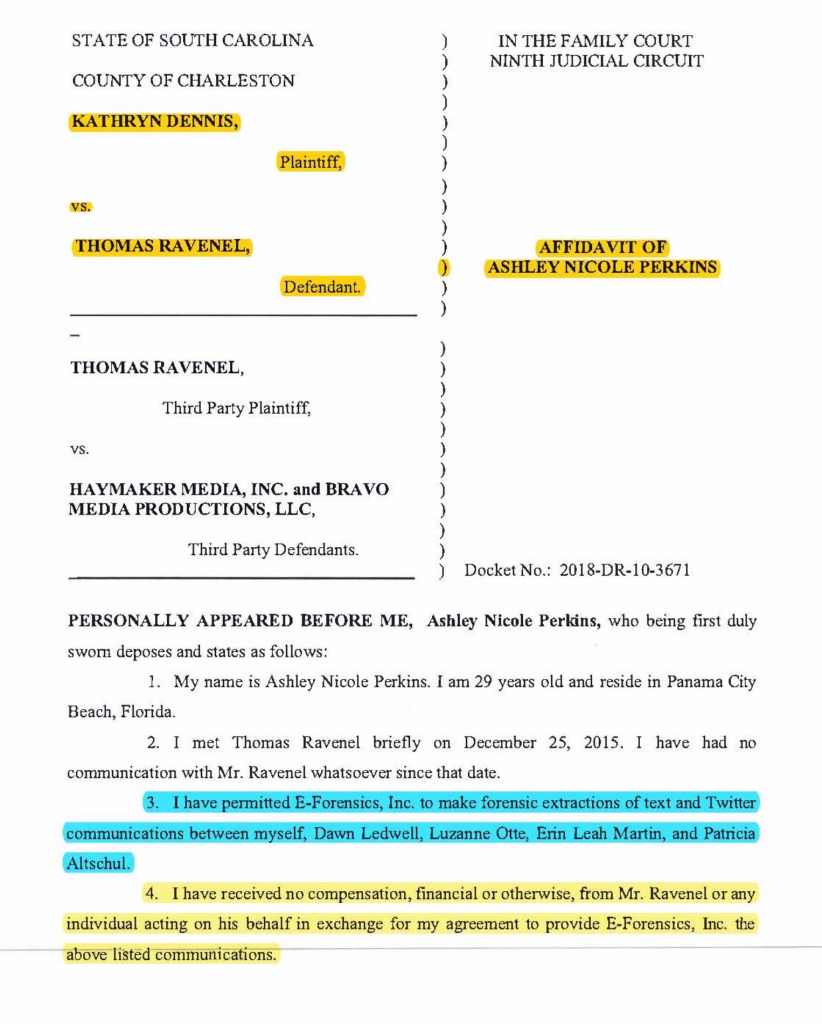 Perkins also noted in her affidavit – dated January 26 – that she has “received no compensation, financial or otherwise” from Ravenel or from “any individual acting on his behalf” in exchange for her “agreement to provide E-Forensics Inc. the above listed communications.”

While that is obviously a narrowly drawn declaration, Perkins is touting it on social media as a blanket denial of her having received any alleged payoff from Ravenel.

#NoPayOffHere, she wrote in a hashtag accompanying her tweet.

Unlike the vast majority of “Southern Charmers,” this news outlet has not disassociated ourselves from Perkins.  Certainly we have legitimate questions as to what may have motivated her sudden reversal five months ago, but we will continue to let her speak her piece – just as we will continue to extend an open microphone to anyone associated with this soap opera (including Ravenel).

Ultimately, criminal and civil courts – along with the court of public opinion – will render judgments on these matters.  In the meantime, though, in the six years we have been covering Southern Charm-related drama it is clear the real action has always been (and will always be) off camera.