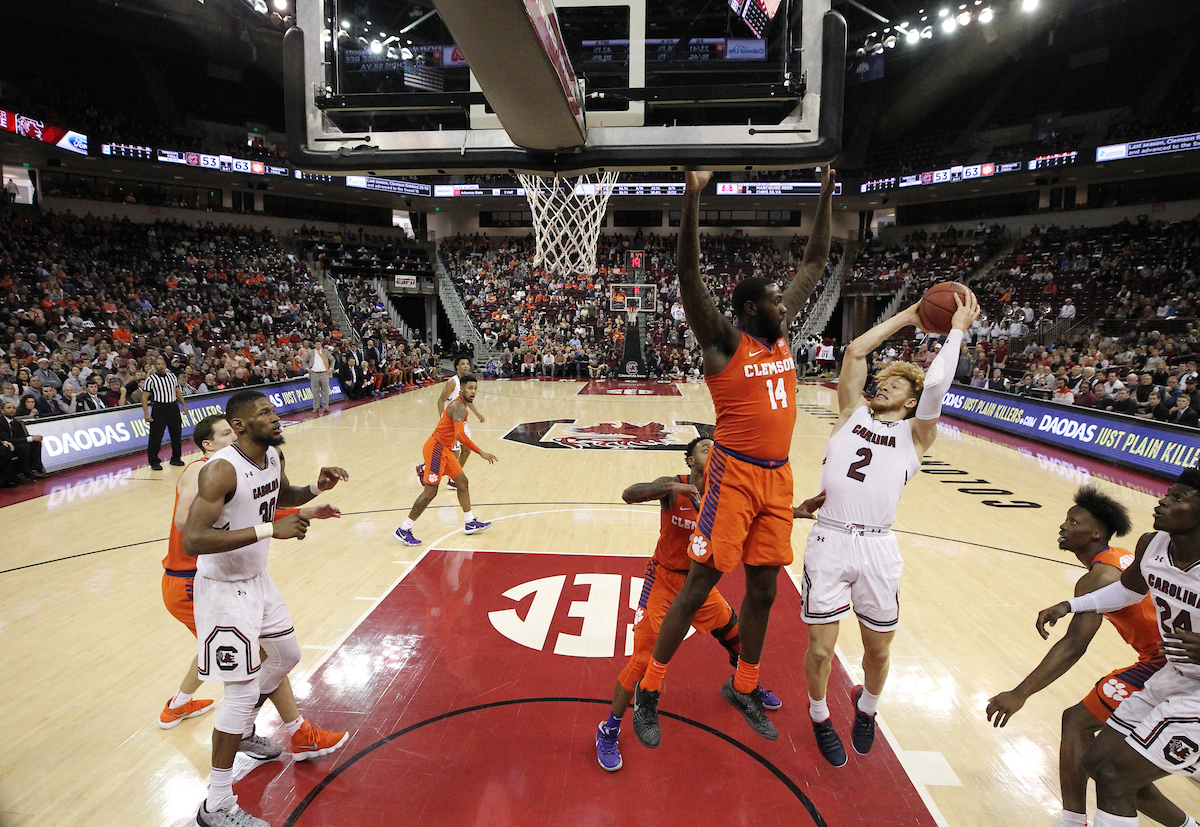 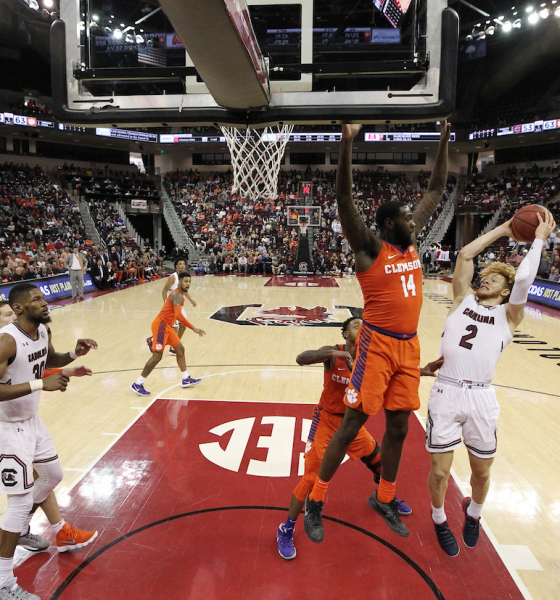 Clemson University’s men’s basketball team vanquished its arch-rival the University of South Carolina on Saturday – with the Tigers (9-4, 0-0 ACC) pulling away from Gamecocks (4-7, 0-0 SEC) to earn a 78-68 victory at the Colonial Life Arena in downtown Columbia, S.C.

The loss was South Carolina’s third straight in this series – and fourth straight in what is shaping up to be another down year under the increasingly irascible seventh-year head coach Frank Martin.

South Carolina was supposed to be an NCAA “bubble” team this season, but barring a miraculous turnaround the Gamecocks will be lucky to finish the current campaign with a winning record.  Meanwhile Clemson – which began the year among the nation’s Top 25 programs – is slowly getting back on track as it seeks a second straight bid to the “Big Dance” under head coach Brad Brownell. 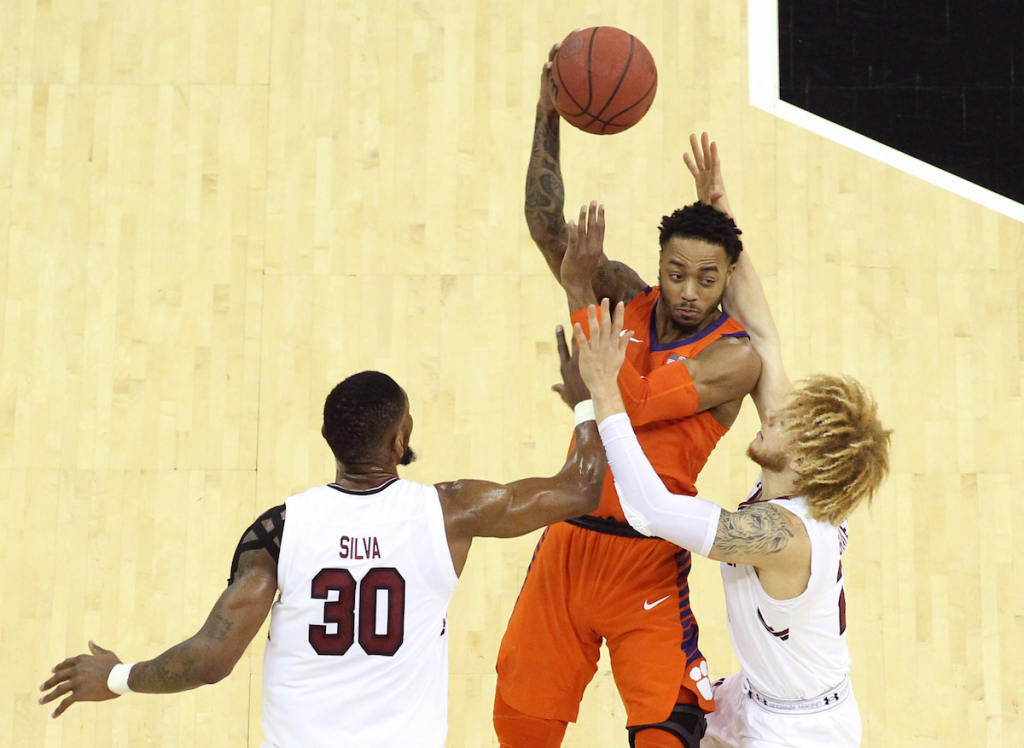 Senior graduate guard Marcquise Reed (above) paced the Tigers in this game with 20 points off of the bench – leading all scorers in the contest.  Reed also grabbed five rebounds, recorded four assists and made three steals in his return to action following an injury to his knee sustained against Saint Peters three weeks ago.

South Carolina was led by senior forward Chris Silva, who recorded 18 points against the Tigers – his fourth straight game in double figures.  The Gamecocks’ top performer so far this season – true freshman guard A.J. Lawson – struggled mightily in his first rivalry game in garnet and black, scoring just eight points on an atrocious 2-for-15 afternoon from the floor.

Lawson has now been held to single digits in back-to-back contests.

The Gamecocks started strong against Clemson, leading by seven points in the first half after senior guard Hassani Gravett drilled a three-pointer with 11:53 remaining in the opening stanza.  But a 9-0 run gave Clemson a two-point lead less than three minutes later.

Reed scored seven of his twenty points during that run – including a go-ahead jumper with a little more than nine minutes left to play before intermission.  The game was nip and tuck for the next few minutes, with Carolina taking a 30-29 lead on Silva free throw with five minutes before the break.

But Clemson answered again, scoring ten unanswered points en route to a 16-4 run to close out the first half.  Senior forward David Skara – who finished with fourteen points for the Tigers – nailed a pair of clutch three-point baskets as the Tigers padded their lead heading into the locker room. 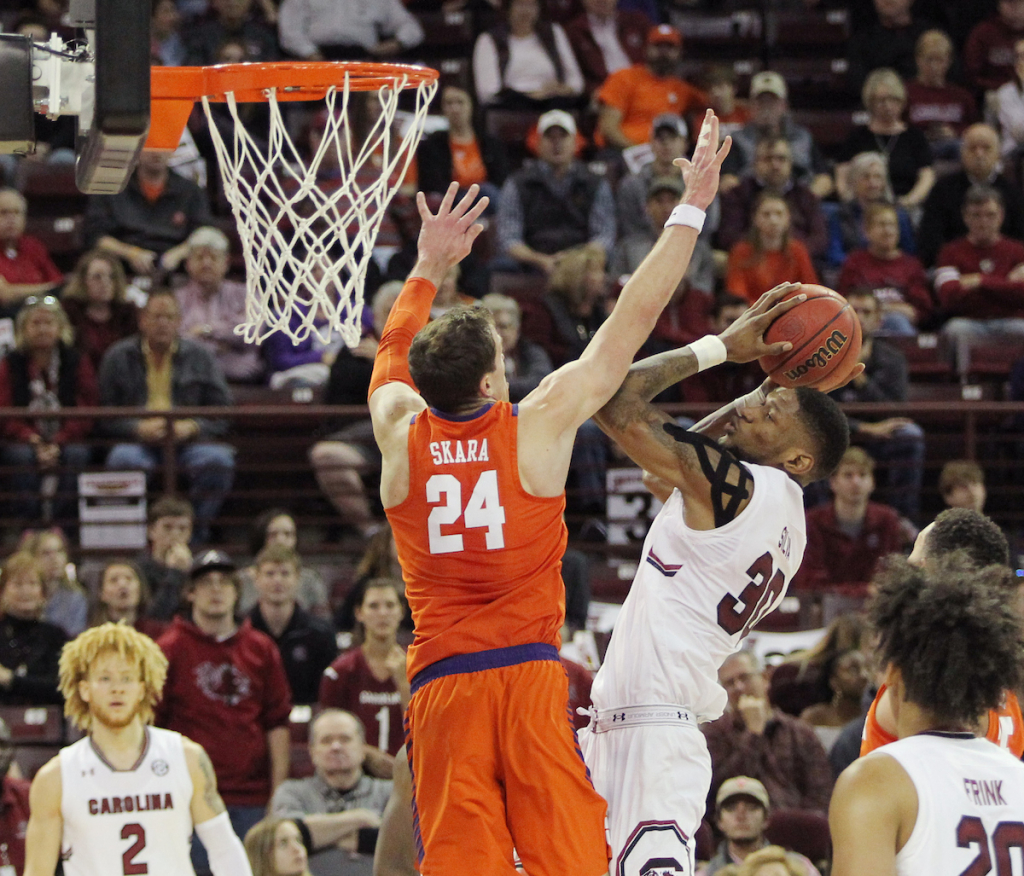 South Carolina would get no closer than five points in the second stanza, with senior forward Elijah Thomas scoring ten of his eleven total points for the Tigers during the final frame.

Both the Gamecocks and the Tigers have one last non-conference game on their schedules this year before opening difficult conference slates in 2019.  Clemson will host Lipscomb on at 3:00 p.m. EST on December 30 at Littlejohn Coliseum in Clemson, S.C. while South Carolina will host North Greenville at the Colonial Life Arena at 2:00 p.m. EST on New Year’s Eve.