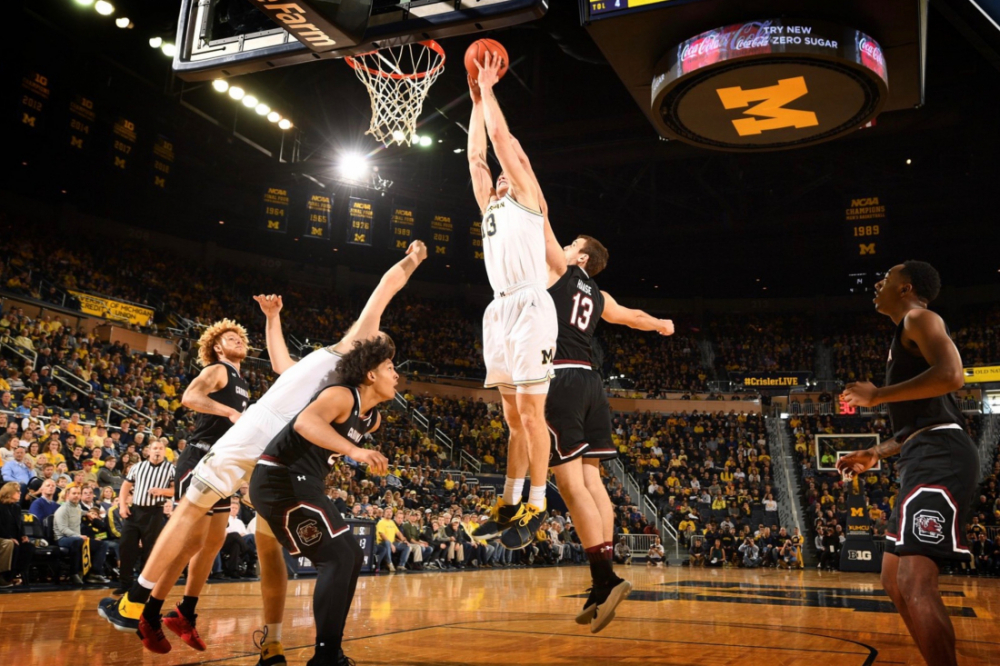 The struggling University of South Carolina men’s basketball team played one of its better games of the season on Saturday – it just wasn’t anywhere near enough against the No. 5 team in the nation.

The Gamecocks (4-5, 0-0 SEC) fell on the road to Michigan 89-78 at the Crisler Center in Ann Arbor, Michigan – with sellout crowd of 12,707 watching the fifth-ranked Wolverines overcome a sluggish start to advance to 10-0 for only the fourth time in program history.

Michigan trailed briefly during the first half and led the upset-minded Gamecocks by only six points at halftime, but sophomore guard Jordan Poole caught fire after intermission with two long range buckets and an emphatic slam dunk to stretch his team’s lead to eleven.  Poole scored 19 of his career-high 26 points in the second half for the home team – helping the Wolverines (10-0, 0-0 Big 10) pull away from head coach Frank Martin’s squad early in the second frame.

South Carolina forward Chris Silva – a preseason all-SEC selection who been inconsistent at best this year – had 18 points in this contest to go with 12 rebounds, arguably his best game of the season.  Meanwhile junior forward Maik Kotsar scored a season-high 16 points in a losing effort.  Freshman phenom A.J. Lawson – the team’s leading scorer – went for 10 points, marking the seventh time he has hit double figures on the season.  Lawson added a team-leading five assists and three steals against the Wolverines, who prior to Saturday had yet to surrender more than 67 points to an opponent this year (including victories over then-No. 11 North Carolina, then-No. 19 Purdue and then-No. 8 Villanova).

South Carolina also shot 52 percent from the floor against Michigan, the highest of any team to face the Wolverines.

Those numbers won’t help the Gamecocks get into the NCAA tournament if they keep losing games, though.   A “bubble” team heading into the season, South Carolina’s chances of returning to the Big Dance for the second time in three seasons look slim at the moment.

The Gamecocks get a week-and-a-half off before facing another top five opponent – fourth-ranked Virginia.   The Cavaliers (8-0, 0-0 ACC) will visit Colonial Life Arena in Columbia, S.C. on December 19 at 7:00 p.m. EST, a game which will be televised nationally on the SEC Network.

Got something you’d like to say in response to one of our stories? Please feel free to submit your own guest column or letter to the editor via-email HERE. Got a tip for us? CLICK HERE. Got a technical question or a glitch to report? CLICK HERE. Want to support what we’re doing? SUBSCRIBE HERE.
Banner: @UMichBball