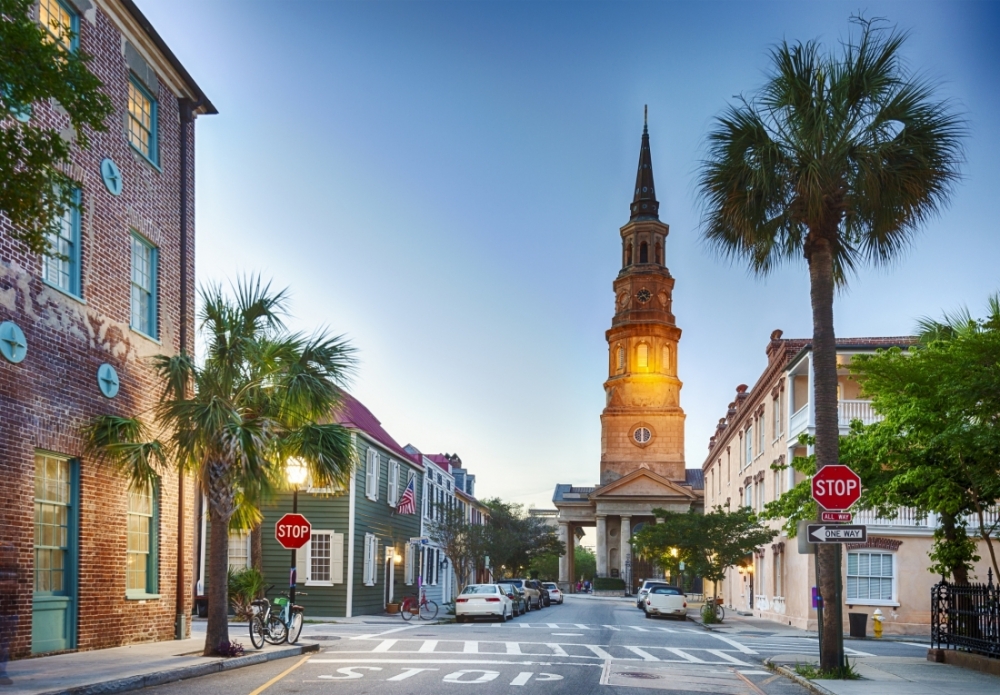 by AMY FEINSTEIN || When we last left our friends on Bravo TV’s Southern Charm, Austen Kroll had a successful beer debut, Thomas Ravenel opted out of buying Plan B (a.k.a. Ashley Jacobs) promise ring, and Kathryn Dennis tells Craig Conover she’s doing well, but this is a Bravo show, so something needs to go wrong, right?

We open on a bad omen, as Naomie Olindo is at the gym, waiting for Kathryn, who is a no-show.  Thomas is in his bathroom submerging his face in a sink full of water and either a) trying to close his pores with a cold water bath or b) creating an improvised Neti Pot?

Who knows, but when he’s done, he dries his face and says, “it works.”  Maybe, maybe not.

Naomie checks around and nobody has heard from Kathryn, and she is worried.  Shep Rose, who knows Kathryn better than most seems less concerned, and heads out to meet Austen for a beer.

Austen says his party was overall a huge success, and his parents are going to invest to get the business off the ground.  The downside, he and Victoria are done after an explosion following the beer introduction.  Austen said he was incredibly dumb and told Victoria he hugged Chelsea Meissner and picked her up.  My dear, it’s called sabotage. But even his subconscious didn’t see the next step.

“She tossed a drink at me,” Austen says, still sounding shocked that it happened.

“She threw it at you?” Shep says incredulous.

“At me, on me. I told her to get in an Uber and go home. It’s been radio silence ever since.”

Austen admits he blocked her afterward, and he’s done.  Poor guy was the last to know, because through the magic of editing, we all knew that Victoria was not the girl for him.

Cue the ominous music, as we are next at Casa Altschul where Plan B has arrived for more advice from the sage.  Michael lets her in, and the genuflecting begins.

“Thank you for making time for me.”

Plan B speaks as if Patricia Altschul were an in-demand shrink who made an opening in her schedule for a crisis. But Thomas’ season five girlfriend believes she is in crisis, because the whale is wriggling off the hook.

Patricia has the prescription: A hot toddy!

“So what’s been going on?” Patricia asks, knowing very well what’s going on.

I do like a woman who plays with her food before eating it.

She’s complaining that she’s been banned from seeing the Ravenel children after her Hilton Head hysteria, and that Thomas is partying and leaving her alone.  She says she has nothing else.

She adds, and by the look on the girlfriend’s face, the words echo: “Kathryn is the children’s mother, and is going to be there forever-ever, ever, ever.”

Naomie drops into see Chelsea, brings beet juice, and tells her she’s concerned about Kathryn.  Naomie says that Kathryn used to go radio silent and “drop off the face of the earth” before she ended up going to rehab.  It’s obvious Naomie is thinking the worst, but anyone who actually knows Kathryn wouldn’t be concerned about drugs or drinking, but about the tsunami of stress she’s been dealing with, which includes two deaths, and the f-ed up episode of This Is Your Life at Hilton Head, hosted by the chronically parched Plan B.

Craig meets a law school friend, Warren, for a drink, and with his splint, all I can think of is The Fugitive, and the one-armed man.

Warren has gotten married, established a law practice, and had a child.  Craig says he’s designed a clip art pillow for Patricia.  Warren calls it all farcical, which means he too will be deleted from the phone just like the life coach.

Off to Thomas’ house where the children are waking up in matching pajamas.  They are either really compliant, or this is seriously staged, because other than for holiday cards, I have never managed this feat.

Thomas talks about Kathryn’s transition from “a young carefree adult to a woman with a woman’s heart.”

What does that mean?  And how would you know, considering that thirty is your cut-off age?

Thomas admits that Plan B is upset that after two months of dating, he hasn’t proposed.  Did he miss the proposal on the timeline in your contract or something?

The next part is hard to watch as we see Danni Baird and Naomie headed to Kathryn’s to check up on her.  It’s been days, and she has not returned calls or texts.  She’s missed work, and Naomie can’t understand why someone would do this unless …

Did I mention I love Danni? That being a friend trumps the law!

Kathryn’s car is at her apartment, and Naomie and Danni have the property manager do a wellness check.  She’s there, she’s alive, and she doesn’t want to talk (at least not on camera).

While the spotlight of worry is firmly on Kathryn, does nobody realize that Craig is having a mental health crisis and screaming for help?  He lives in a sty, he’s recovering from a butter knife injury, and his life of pillows involves clip-art and showing up hours late for a business meeting.  Does Craig have to set himself ablaze to be the focus?  Don’t his parents watch Southern Charm?  Out of BWI it will be an hour’s flight.  I say this with love, Craig, please get some help.  You will do it and wonder why you didn’t do it sooner.  In the words of Howard Jones, “Things Can Only Get Better.”

Danni, Chelsea, and Naomie get a call from Shep that Kathryn picked up the kids on time. Thomas doesn’t know that Kathryn took a mental health break, and Shep makes the executive decision that nobody is going to tell him.

We transition to dinner at PawPaw where Thomas and Plan B are meeting, and Thomas pulls out a gift box after a build up which makes her think she’s getting her ring.

“I’ve been doin’ ma best to make you mine,” Thomas says.

“You’re not doing a very good job,” Plan B asserts.

Plan B agrees to have wine with her cough drop, and then calls the wine “interesting.” No wine pairing in the world involves menthol-eucalyptus and a white from Portugal!

She opens the box to find a bracelet and not a ring of any kind.  Disappointment sets in, and it’s written all over her face.

She seems more gracious when her dinner arrives, as she thanks the waiter twice.

The follow-up conversation launches more bobble head movements, as Thomas tells her to get a job.

She reacts like she’s on an episode of The Bachelor, wondering if she has a chance of winning, or if not, can she be The Bachelorette next season? Bravo? Hello?

We finally see Kathryn – who has reappeared at Danni’s house, and Danni wants answers and gets them.

Kathryn says she got overwhelmed and took a mental health break. She shut off her phone, and shut out the world.

People who don’t feel worthy can’t imagine that anyone cares or even notices. She was shocked that Danni was scared and is now angry that Kathryn didn’t realize that those who love her might be scared.

Kathryn tells Danni she has been taking medication, anti-depressants since rehab. She made the classic mistake of believing that she was feeling good, so she could stop, not realizing that part of why she was feeling better was the medication and the therapy.  For those who haven’t been there, your symptoms creep back in slowly, and that’s what happened to Kathryn, combined with loss, and the stress of being blindsided by someone with a giant ax to grind.

Danni explains that she didn’t think Kathryn had chosen hedonism, she was scared she had taken her life.

Those seeing things through the filter of depression are not viewing the world clearly.

If you or someone you know is in crisis, please call the National Suicide Prevention Lifeline at 1-800-273-TALK (8255) or contact the Crisis Text Line by texting TALK to 741741. For readers outside the U.S., visit Suicide.org or Befrienders Worldwide for international resources you can use to find help.

Only two more episodes to go this season, and the tension is building!