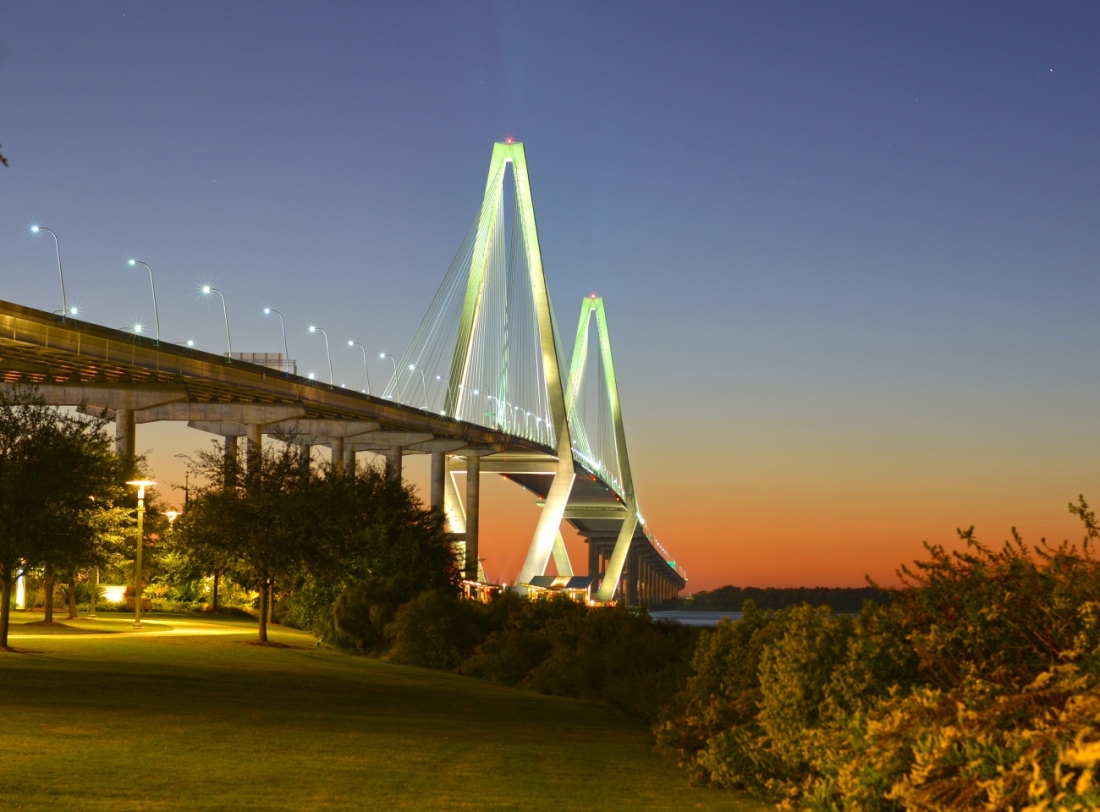 We all know Thomas Ravenel  is in trouble (again) … but what about the Charleston, South Carolina bridge named after his famous father, former U.S. congressman and state senator Arthur Ravenel, Jr.?

Opened in 2005, this 1,546-foot cable-stayed span is one of the most visible, indispensable pieces of infrastructure ever built in the Palmetto State.  It is even more indispensable at the moment thanks to #Trafficmaggedon – a.k.a. the closure of the westbound span of the James B. Edwards bridge over the Wando River between Daniel Island and Mount Pleasant, S.C.

Is the Ravenel bridge being properly monitored and maintained, though?  Good question …

One of the most disturbing revelations associated with the closure of the Edwards bridge has been the extent to which the S.C. Department of Transportation (SCDOT) appears to have been negligent in its maintenance of the span – and less-than-forthcoming regarding its serious structural vulnerabilities.

Can the same be said of the Ravenel bridge?

Obviously the iconic traverse is already a failure in one respect – it was built with insufficient clearance to accommodate many of the next generation mega-container ships.  Of course given the amount of business the port of Charleston, S.C. is losing to Savannah, Georgia and Hampton Roads, Virginia – that shouldn’t be an issue.

Anyway, over the Memorial Day weekend, one Lowcountry resident discovered something else amiss during a visit to the Mount Pleasant Memorial Waterfront Park.

Angela Valmus of Charleston, S.C. was preparing to go for a run over the bridge when she noticed something a bit disconcerting beneath one of its columns.

“I discovered this ‘little’ sinkhole at the base of a supporting column,” Valmus wrote on her Facebook page.

According to her, the sinkhole – located on an off ramp on the Mount Pleasant side of the structure – is approximately five feet in diameter and three feet deep. 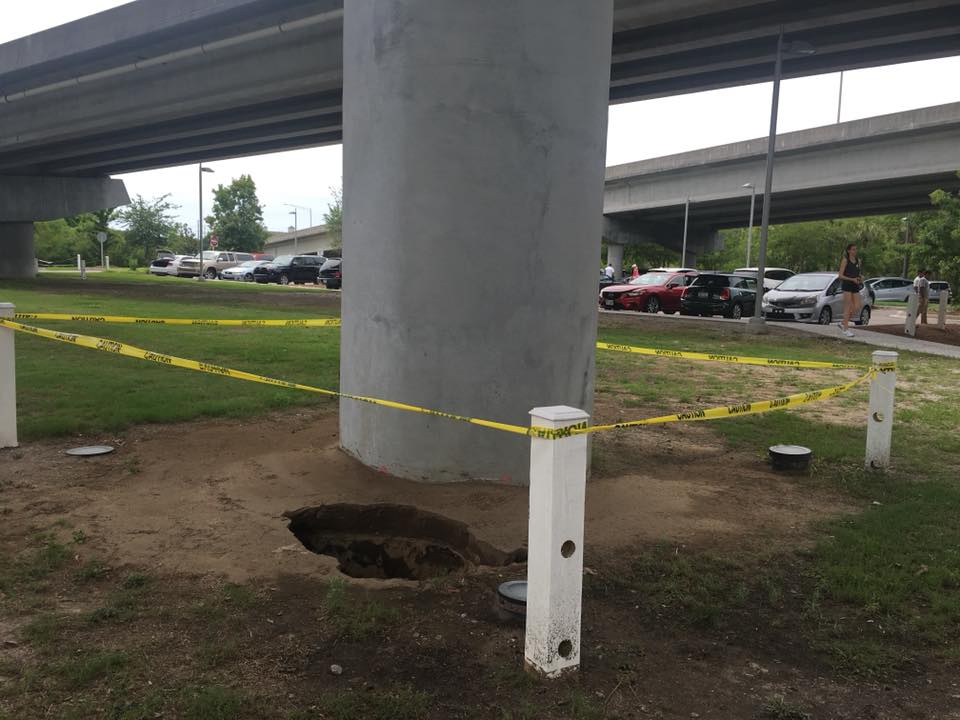 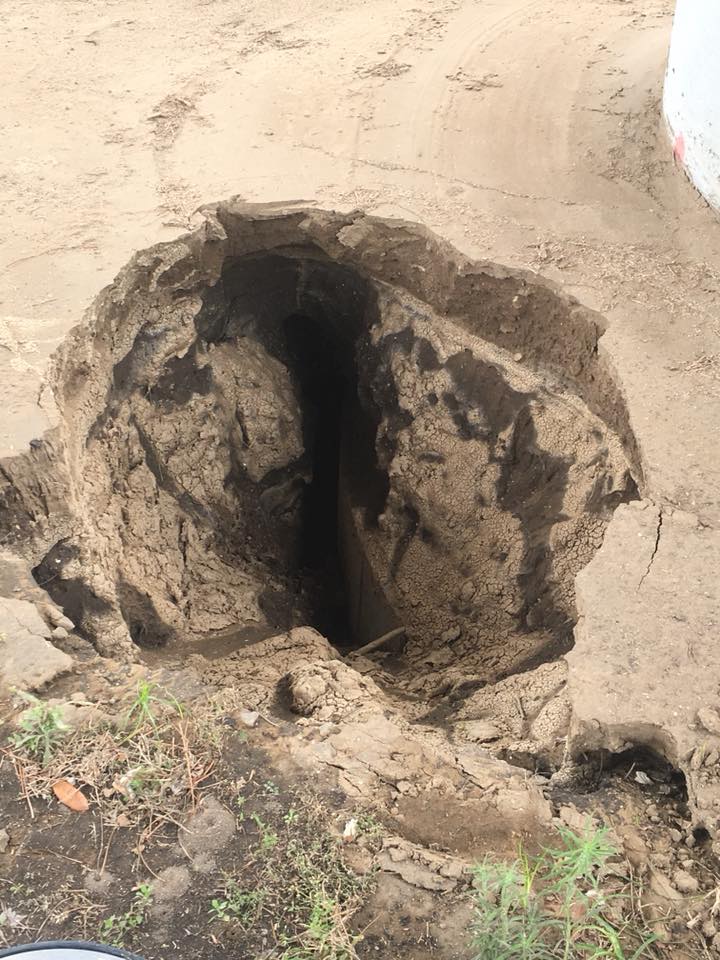 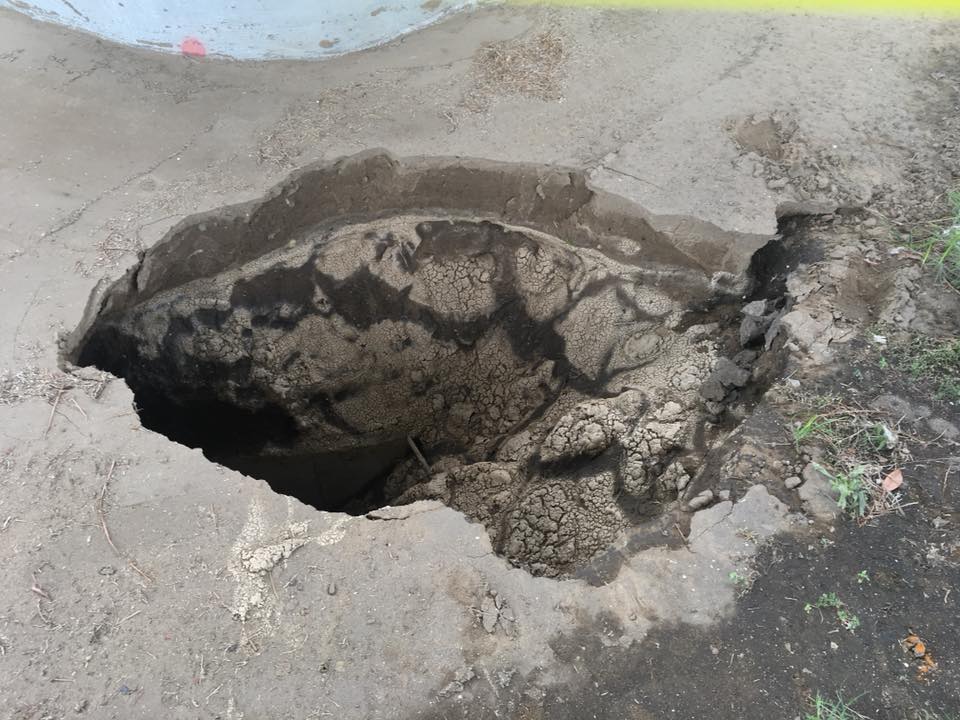 Is this sinkhole serious?  Does it pose a threat to the bridge?

We’re not subsurface structural engineers, but we do know this $632 million project ($808 million in 2017 dollars) underwent extensive foundation testing prior to its construction.  Some of those tests dated back to 1993, but the last round was conducted in 2000 as part of the design-build of the bridge.

“Most of the bridge alignment crosses over water or low-lying tidal, salt marshes,”  one engineering report (.pdf) noted.  “On the Mt. Pleasant side, the upper deposits consist of loose to dense sand.”

Below that?  The Cooper Marl – a homogenous, calcareous Oligocene formation that lies beneath Charleston and its famous riverbeds.  That’s the formation holding up the bridge.

What is a “homogenous, calcareous Oligocene formation?”  In English, it is one big, old chunk of calcium carbonate – a massive deposit that serves as the primary load-bearing geologic formation not only for the Ravenel bridge but all deep foundation projects in the Charleston area.

According to the engineering report – prepared by engineers Liang Shen and Robert Bittner – the Ravenel bridge “is supported by drilled shafts” ranging from eight to ten feet in diameter. Each of these drilled shafts contains a “permanent 10’-6” diameter, 0.75” thick steel casing embedded a minimum of five feet into the Cooper Marl.”

Local officials don’t seem especially worried about the sinkhole.  According to reporter Tony Bartelme of The (Charleston, S.C.) Post and Courier, Mount Pleasant, S.C. police say the hole has been there “for months.”  Meanwhile a state transportation official told Bartelme the hole was not “a structural issue with the bridge.”

Greenville Sheriff Drama: Will Lewis Looking To Cut A Deal