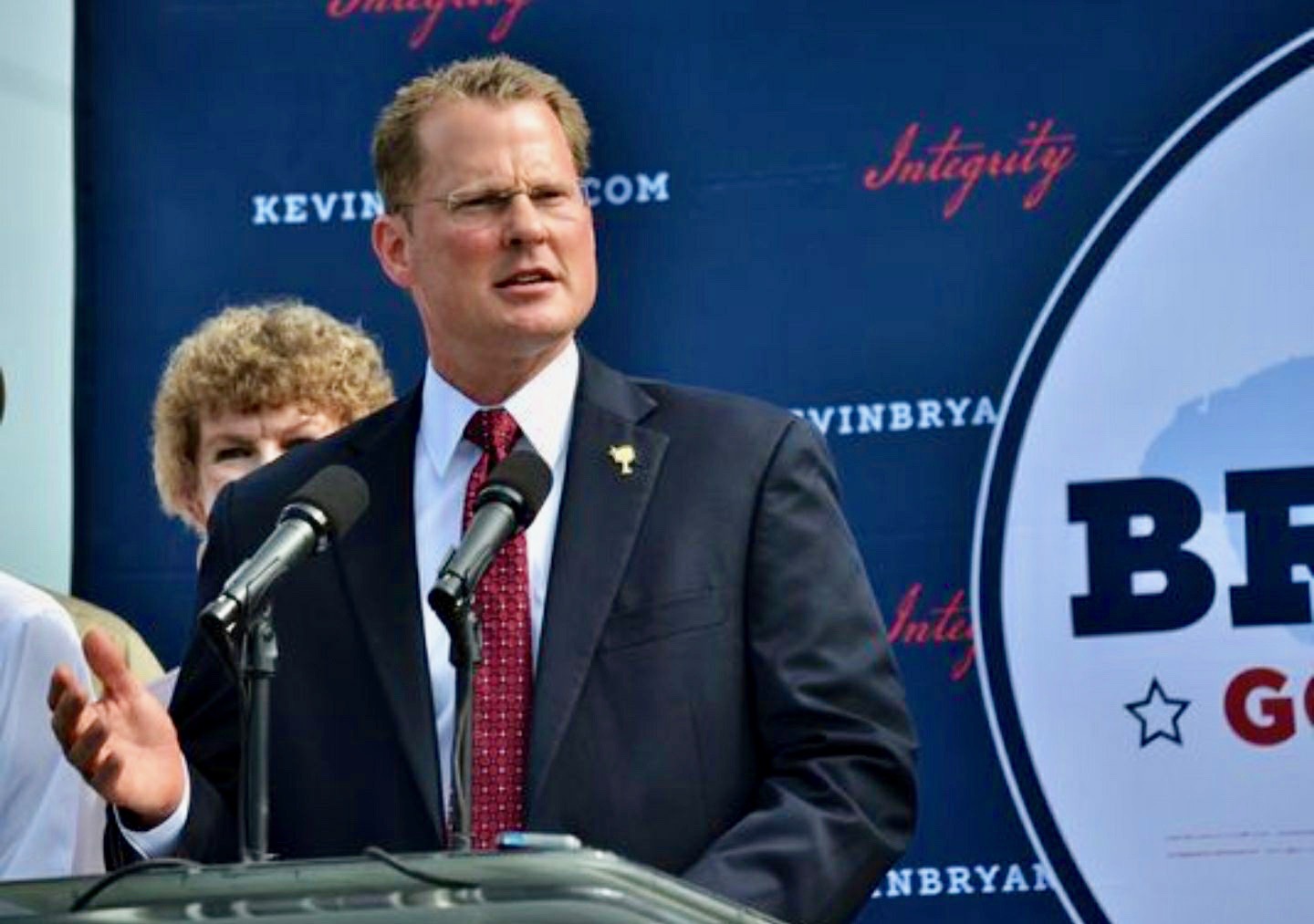 South Carolina lieutenant governor Kevin Bryant rolled out his agenda for the upcoming “Republican” gubernatorial campaign, offering GOP primary voters a “Contract with South Carolina” that he hopes will distinguish himself from his rivals.

On ethics reform, Bryant called the ongoing corruption scandal in state government “a national embarrassment and an insult to the integrity of the people of South Carolina.”

On infrastructure, he argued the S.C. Department of Transportation (SCDOT) should become a true cabinet agency “so that the voters will know who to hold accountable.”

On education, Bryant called for expanded parental choice and additional government restructuring, arguing that the S.C. Department of Education (SCDE) should also become a part of the governor’s cabinet.

We support both of those structural changes …

“We will take the Contract with South Carolina to the people all across our state and together we will build a conservative majority of ethical representatives with the courage to act on behalf of all South Carolinians,” Bryant said in rolling out his platform.

Here’s a look at Bryant’s agenda …

Bryant, 50, is a pharmacist from Anderson County, S.C.  Prior to “ascending” to the lieutenant governor’s office last January, he represented S.C. Senate District 3 (map) for nearly a dozen years.  He announced his candidacy for governor of South Carolina last summer – and has been running on a platform of social/ fiscal conservatism ever since.

In addition to the hot-button issue of registration by party (which would require voters to choose whether they participate in “Republican” or Democratic partisan primary elections), Bryant has also served up red meat to GOP voters on the issue of immigration.

No one is going to get to the right of him in this race, in other words …

The good news for Bryant?  A credible poll recently showed him in second place in the 2018 “Republican” gubernatorial primary behind incumbent governor Henry McMaster.  The bad news?  Bryant’s fundraising has consistently lagged well behind that of McMaster and Lowcountry labor attorney Catherine Templeton, who is viewed as McMaster’s most credible 2018 challenger.

Our view?  Bryant’s campaign obviously has tremendous potential.  He is well-regarded by fiscal and social conservatives, and has the bully pulpit of a statewide office at his disposal.  Perhaps most importantly, he is the only one of the announced GOP gubernatorial candidates (so far) who hails from the conservative, vote-rich Palmetto Upstate.

Bryant’s fundraising struggles are real, though, which could conceivably limit his ability to target his message/ reinforce it with an aggressive grassroots, get-out-the-vote operation.

“Bryant’s bottom line is simple: He has to raise more money, and he has to do it quickly,” we wrote earlier this month in assessing his electoral prospects.

Bryant has also faced withering criticism over his pharmacy’s receipt of millions of dollars in federal and state entitlements – although we’ve refrained from joining the chorus of indignation on that issue.  While the Medicaid and state insurance plan payments certainly create a major perception problem for the GOP candidate, he has done nothing any other pharmacist in his shoes wouldn’t have done.

Nor does it appear he has used his public office to advance his industry.  In fact, Bryant often voted against his own interests as a member of the State Senate.

Of course, we added that the taxpayer-funded largesse he received “will still cause headaches for him in the event his 2018 candidacy begins to gain traction.”

Got something you’d like to say in response to one of our stories? Please feel free to submit your own guest column or letter to the editor via-email HERE. Got a tip for us? CLICK HERE. Got a technical question or a glitch to report? CLICK HERE. Want to support what we’re doing? SUBSCRIBE HERE.
Banner: Kevin Bryant for Governor