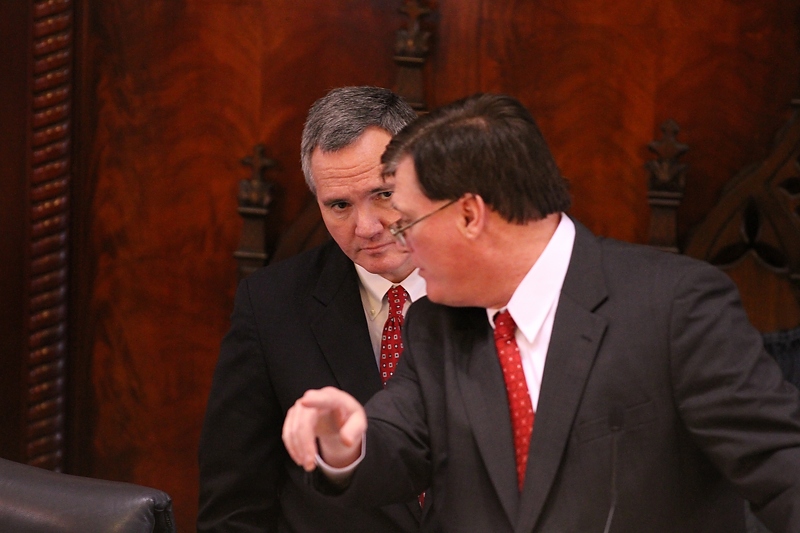 Former South Carolina Speaker of the House Bobby Harrell is mulling a return to politics, multiple sources familiar with his plans tell this news site.

Harrell was arguably the most powerful politician in the Palmetto State before he became the first victim of #ProbeGate – an ongoing, multi-jurisdictional investigation into corruption in state government.

In fact, the removal of Harrell from office appears to have been the original objective of this investigation … until the script got flipped on those who initiated the inquiry.  Now the investigation has drawn a bead on the political consulting empire of Richard Quinn, a veteran “Republican” strategist whose stable of elected officials clearly intended to benefit from Harrell’s ouster.

In October 2014, Harrell pleaded guilty to committing six ethics violations.  He received a year of probation, tens of thousands of dollars in fines and was required to resign his office.

Harrell also agreed to cooperate with investigators in the ongoing investigation – which he has done.

Another term of Harrell’s plea deal was that he agree not to hold or seek office for a period of three years – which prohibited him from running in the 2014 and 2016 election cycles.

He is eligible to run for office in 2018, however, and is “seriously considering” doing so according to one source intimately familiar with this plans.

Harrell was first elected to the S.C. House of Representatives in 1993 – and promptly chosen as the chairman of the chamber’s freshman caucus.  From 1997 to 1999 he served as House majority leader and from 1999 to 2005 he was chairman of the chamber’s influential ways and means committee – which gets the first crack at writing the state budget each year.  In 2005, Harrell was elected Speaker of the House – replacing David Wilkins, who was appointed by former U.S. president George W. Bush as America’s ambassador to Canada.

He served in that role until his resignation in 2014.

Our view of Harrell’s tenure?  It wasn’t favorable … at all.

We consistently battled with him over his fiscally liberal governing philosophy, repeatedly pointing out that his allegiance to the state’s failed status quo was holding South Carolina back economically, academically and on a host of other fronts.  The outcomes achieved (or rather not achieved) during Harrell’s reign certainly supported our contention, too.

Unlike some, though, we haven’t rejoiced in Harrell’s downfall.  Once he gave up his office, we had no beef with him.  And frankly, it’s become abundantly clear in the intervening years that the cabal which ran him out of office on a rail was involved in some far more serious shenanigans.

Does this mean we support Harrell’s return to politics?  No, it does not.  We cannot envision a scenario in which we would endorse him for any position of public trust – although in the event he declares himself as a candidate for elected office we will certainly do our best to keep an open mind.

And like any candidate, we will allow him the opportunity to make his case to our readers.

Which office is Harrell seeking as he plots his comeback?

Bennett has been one of Harrell’s biggest supporters, incidentally.  In fact, many believed she originally ran for this seat in order to be a “placeholder” for the influential former lawmaker.

Sources close to Bennett tell us those reports are inaccurate, though, and that she has every intention of filing for the 2018 GOP primary election for S.C. House District 114 – and winning another term in Columbia.

“She’ll just outwork him,” one source close to Bennett told us.

About Those Unemployment Tax Cuts …