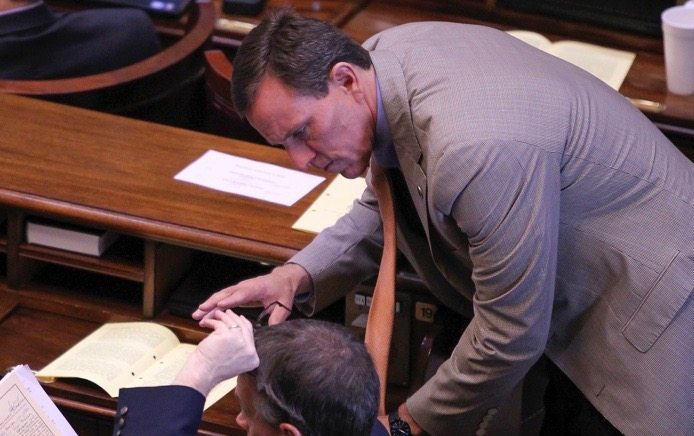 This news site has been eagerly hoping a candidate would come forward and oppose South Carolina’s “Republican” incumbent attorney general Alan Wilson in next spring’s primary election.  We believe Wilson has been materially compromised by his proximity to the ongoing #ProbeGate investigation – particularly his failed efforts to hinder that investigation.

We were encouraged when several promising challengers were initially discussed as likely primary opponents in a race against Wilson next June … but so far none of those would-be contenders have panned out.

Is state representative Todd Atwater one of these “promising” prospective candidates?  Hell no …

We can’t believe we’re about to write this but Atwater – who floated his likely statewide candidacy to The (Charleston, S.C.) Post and Courier this week – might actually bring more ethical baggage to this race than Wilson.

First elected to the S.C. General Assembly in 2010, Atwater has had the audacity for seven years to keep his $400,000 a year position as the chief executive officer and president of the S.C. Medical Association (SCMA) – a liberal lobbyist principal.

That’s right … the guy has essentially been a lawmaker-lobbyist, which is exactly the sort of ethical “no-no” currently dominating headlines in the #ProbeGate investigation.

As we pointed out in a detailed post two years ago when he was mulling a campaign for governor, Atwater claimed this unique arrangement was permissible because he has built a “Chinese wall” between himself and the organization’s lobbying efforts – and sometimes “chooses not to vote when he thinks there is a conflict of interest.”

Is this guy serious?

So to recap … Todd Atwater led group that lobbied the General Assembly.  And didn’t always recuse himself from voting on its interests.  And took it upon himself to decide when he should (or shouldn’t) recuse himself.

How on earth is that legal?

More to the point, where does Atwater get off slamming Wilson’s lack of ethics?

Don’t get us wrong, we want someone to challenge Wilson – and beat Wilson.  And some of Atwater’s criticisms of the sitting attorney general are 100 percent accurate.

But like other liberal state lawmakers currently “investigating” another government corruption scandal, Atwater has precisely zero credibility to level ethical allegations at anyone else.

Todd Atwater needs to make a decision: He can either continue being the state’s top advocate for socialized medicine or he can continue being one of the S.C. General Assembly’s many fiscally reckless “Republicans.”  He should not be allowed to continue doing both.